At a time when Apple delivered its flagship line of new products on schedule despite battling a year of supply-chain turmoil, India could account for at least 12 per cent of the free-on-board (FoB) value of Apple Inc’s iPhones manufactured by its vendors globally by 2025-26 (FY26). 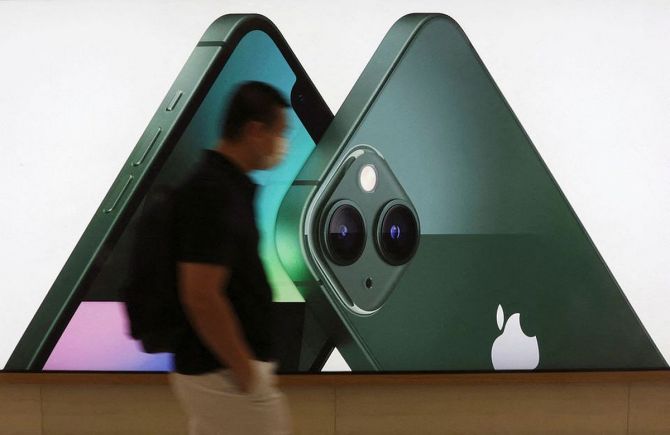 The number represents a significant shift for the Cupertino-based company’s over-dependence on China, where 95 per cent of its phones are still being made.

India’s growing importance can be seen from the fact that in 2021-22 (FY22) — the first year of the production-linked incentive (PLI) scheme (the scheme was extended by a year due to the pandemic) — the FoB value of iPhones made in the country was $1.75 billion, translating into less than 2 per cent of the global value.

FoB refers to freight on board or free on board value for determining the assessable value for imported and exported goods.

It is the ex-factory price plus other costs.

It does not include shipping, marketing and sales expense, and taxes. Analysts say in the case of Apple iPhones, FoB accounts for about half of their sale price.

The shift, however, will depend on whether or not Apple Inc’s vendors in India are able to meet their minimum commitment of FoB value for incremental production of phones they have made under the government’s PLI scheme.

Based on the numbers submitted to the government, the three vendors — Hon Hai Technology Group (Foxconn), Wistron, and Pegatron — have collectively committed to manufacture in India a minimum of $15-billion FoB value of iPhones by FY26 (the last year of the PLI scheme).

However, they have the flexibility to produce a higher FoB value of phones (if other eligible players are unable to claim the incentive), which could go up to $30 billion, according to sources in the know.

Assuming the total value of iPhones sold across the globe goes up to $250 billion in FY26 (from $192 billion in the financial year ended September 2021), India’s share would be around 12 per cent, say sources close to the company.

This share could be much higher (at over 20 per cent) if it is able to get close to $30 billion.

A questionnaire sent to Apple Inc on the issues, however, did not elicit any response.

Under the PLI scheme, eligible companies are given incentives of 4-6 per cent on their production value for five years.

These incentives are designed to reduce the difference in the cost of producing the phones in India vis-à-vis China and Vietnam, so that they can be exported.

In FY22, Apple Inc had just two vendors — Hon Hai and Wistron — making phones for it. But in 2022-23 (FY23), the PLI target has risen substantially to $5 billion with three vendors in force.

If the three vendors are able to meet their minimum targets, India’s share in Apple’s iPhone production would go up to over 5 per cent in FoB value this financial year (FY23).

What is key to the Apple India strategy is that its vendors have committed to export 60 per cent of their total production value in five years (pegged at $42 billion).

They had done so in FY22 when they exported over Rs 11,000 crore of iPhones from the country.

While the domestic market is growing for Apple Inc, it is still small compared to China.

According to submissions to the government, Apple India had revenues of $3.5 billion in the financial year ended September 2021.

That accounts for less than 1 per cent of its total global revenues ($365 billion) in the same period.

Apple’s India revenue is a mere 5 per cent of China’s, where the firm’s revenue was $68.3 billion in the same financial period.

To build scale, Apple will need a vibrant supply chain in the country as it drums up volumes.

With Chinese suppliers not getting clearances for geopolitical reasons, Apple vendors are looking at working with Indian companies — like the company is doing with the Tatas for mechanics — although that is still some time away.

But that could prove to be a challenge since the government is looking at such companies to achieve a value addition of 35 per cent, from the present-day 20 per cent.

Another challenge is labour, where it has already faced factory shutdowns on two earlier occasions.

Numerous impediments in labour laws need to be eased since Apple has committed to create 120,000 direct jobs at its factories under the PLI scheme and has achieved a fourth of that number.