Los Angeles today marked the two-year anniversary of the county’s first-known Covid infection with the tragic news that the virus had taken the life of a 15-month-old child.

“This is the youngest resident to die of Covid-19 since the pandemic began and a stark reminder that the virus can cause devastating outcomes among those most vulnerable, including young children not yet eligible for vaccinations,” said a statement from Los Angeles County Public Health officials.

Children under five are not yet eligible for vaccination in Los Angeles — or the United States at large. And older kids lag the population-at-large in getting vaccinated against the virus. 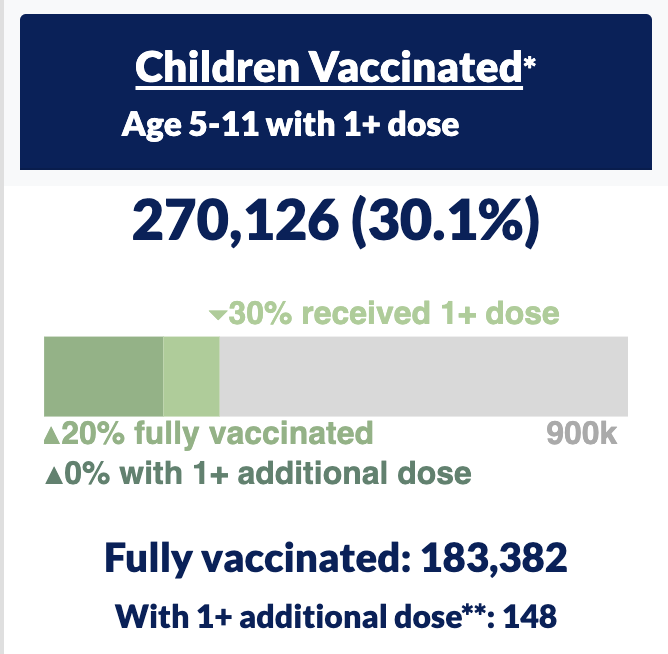 Cases and case rates in L.A. are down from recent highs, but still high compared to, say, last summer’s surge.

Despite the declines in cases, the number of school outbreaks has increased. Health officials say this reflects the highly infectious Omicron variant at work after kids returned to campus from the winter holidays.

Between January 16th-22nd, there were 11 new school outbreaks. Nine of those were in elementary schools, 1 in a high school, and 1 in youth sports.

For the week ending January 23rd, area schools administered more than half a million Covid tests and confirmed 40,694 positive cases. The test positivity was 7%. That is a 33% decrease from the prior week, and far below the county’s current overall test positivity rate, which is 13.1%.

There are 4,534 people with Covid currently hospitalized, a number that has slowly come down from a peak near 5,000 last week.

Officials confirmed 20,866 new infections in the county today, a number about as high as the peak of the 2020-2021 winter surge, but more than halfway down from the more that 50,000 daily cases the county saw earlier this month.