(CNN)American Airlines has agreed to pay its pilots triple their normal rate after a computer scheduling glitch left thousands of flights with understaffed cockpits.

The malfunction in the scheduling program occurred early Saturday morning and allowed pilots to drop flights the airline was counting on them to fly throughout the rest of this month in order to take time off. The number of flights left without one or both required pilots quickly soared past the 12,000 mark, according to the Allied Pilots Association, the pilots union at American, which employs roughly 13,000 APA members.
Although the triple pay is a one-time windfall for American’s pilots, the airline has also agreed to permanent double-time pay for pilots who fly on peak days, which often fall during holiday travel periods.

“We’re pleased to have reached an agreement with the APA and appreciate their partnership in coming to a resolution quickly to take care of our pilots, our team and our customers,” the airline said in a statement.

The problem comes as American (AAL) and other US carriers struggle to deal with a surge in flight cancellations due to staffing shortages.

So far this summer the entire airline industry has had to cancel thousands of US flights due to a shortage of crew members. Often those cancellations have spiked over holiday weekends, including Memorial Day, the weekend of Father’s Day and Juneteenth and the Independence Day holiday. There was also a surge of cancellations over the Christmas and New Year’s holiday travel period last year.
The computer glitch caused its own set of problems for the nation’s largest airline. Tracking service FlightAware showed nearly 200 American flights, or about 6% of its schedule, were canceled Wednesday, and more than 800 flights, or roughly 26% of those scheduled, were delayed.

American spokesperson Matt Miller said he didn’t know the cause of the canceled and delayed flights on Wednesday or how many were caused by the scheduling snafu. But Dennis Tajer, an American pilot and spokesperson for the union, said it’s clear that the issues stemmed primarily from the scheduling problems.
Tajer added that negotiations between American’s new CEO, Robert Isom, and the pilots union leadership got things back to normal fairly quickly.
“You had a system under duress already without enough pilots,” Tajer said. “This IT failure would have caused problems for the month of July if nothing had been done. We’re cautiously optimistic that Mr. Isom sees the value of working with us.” 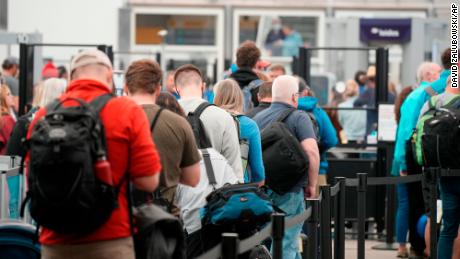 Ed Sicher, president of the APA, said in a message to membership that he hopes this agreement can be a springboard to reaching a new labor deal for pilots at American.
The union and the airline had been negotiating a new contract since 2019, but efforts to reach a long-term agreement were derailed by the pandemic. Pilots are continuing to work under terms of a 2015 contract that had been due to be renegotiated in 2020.
Source: Read Full Article