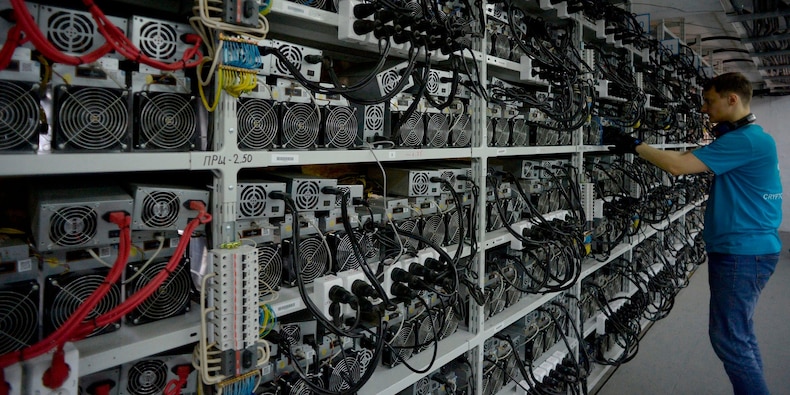 The energy use of bitcoin is a key factor that makes the cryptocurrency unattractive to institutional investors, the chief investment officer of Société Générale’s UK private bank has said.

“We are very alarmed, I’m sure as others are, by the environmental aspects of bitcoin,” Fahad Kamal, the investment boss at SocGen’s Kleinwort Hambros bank, told Insider. He said the energy it used was “staggering.”

Estimates from the University of Cambridge suggest that bitcoin uses more electricity each year than Argentina and Ukraine, due to the energy-intensive mining process.

As the price of bitcoin has soared in recent months, a number of investors have raised questions over bitcoin’s energy consumption. Yet others argue that bitcoin increasingly uses renewable energy – and will do so more in the future.

Bill Gates told CNBC’s Andrew Sorkin in a live-streamed Clubhouse session last week that the currency “uses more electricity per transaction than any other method known to mankind.”

Kamal said bitcoin’s energy use means it clashes with environmental, social and governance investing, which is becoming increasingly important in the financial world.

“If you think about various trends that are occurring in the market, right now, bitcoin is one but ESG is a much bigger one.”

The issue of bitcoin’s energy use has come to the fore in recent weeks, after Elon Musk’s electric car company Tesla announced it had bought $1.5 billion of the currency in January.

Bitcoin is “mined” when computers are hooked up to the cryptocurrency’s network to verify transactions. As a reward for this work, which involves solving puzzles, miners can sometimes receive small amounts of bitcoin.

Read more: MORGAN STANLEY: Buy these 14 infrastructure stocks now as Congress gets ready to pass a deal later this year – including 8 that could rise at least 55%

Some miners have hooked up whole warehouses of computers to try to get more bitcoin, using vast amounts of electricity.

Yet Matt Blom, head of trading at Nasdaq-listed crypto exchange group Diginex, said fears about bitcoin’s environmental impact were overblown, because in the future almost all mining could be done through renewable energy.

“As time goes by I think that is the way things are going to be,” he told Insider.

A report from Cambridge University in September 2020 estimated that 39% of proof-of-work mining is powered by renewable energy, primarily hydroelectric. And it said more than 70% of miners used renewables as part of their energy mix.

Kamal said: “You can imagine that bitcoin gets environmentally friendly too and is only mined using solar power, but we’re not there yet.

“As of right now, it’s a huge consumption of electricity used to mine it. And that electricity is produced in very dirty ways.

“And for us, that is a big factor,” he said. “The fact that bitcoin is dirty, relatively speaking, is a pretty big issue.”

However, Kamal said Kleinwort Hambros – which is part of SocGen’s €119 billion ($145 billion) private banking network – does not have a “black and white view” of cryptocurrencies.

“There’s obviously some really positive aspects to it, and some not.” He said many of bitcoin’s problems, such as high volatility, would become less serious if more people adopted the cryptocurrency.