California Gov. Gavin Newsom took to the podium Monday morning after a devastating weekend for the state that saw the all-time high number of cases on Friday of about 22,000, growing to over 30,000 by Sunday. On Monday, the number was 24,735. “Just over the past 3 days we’ve averaged about 25,000 new cases a day,” said the Governor.

Over the weekend, Newsom’s Regional Stay-at-Home order went into effect on Saturday at 12:59 p.m. PT. The triggering metric for the order was when a region of the state has under 15% of its ICU beds left. 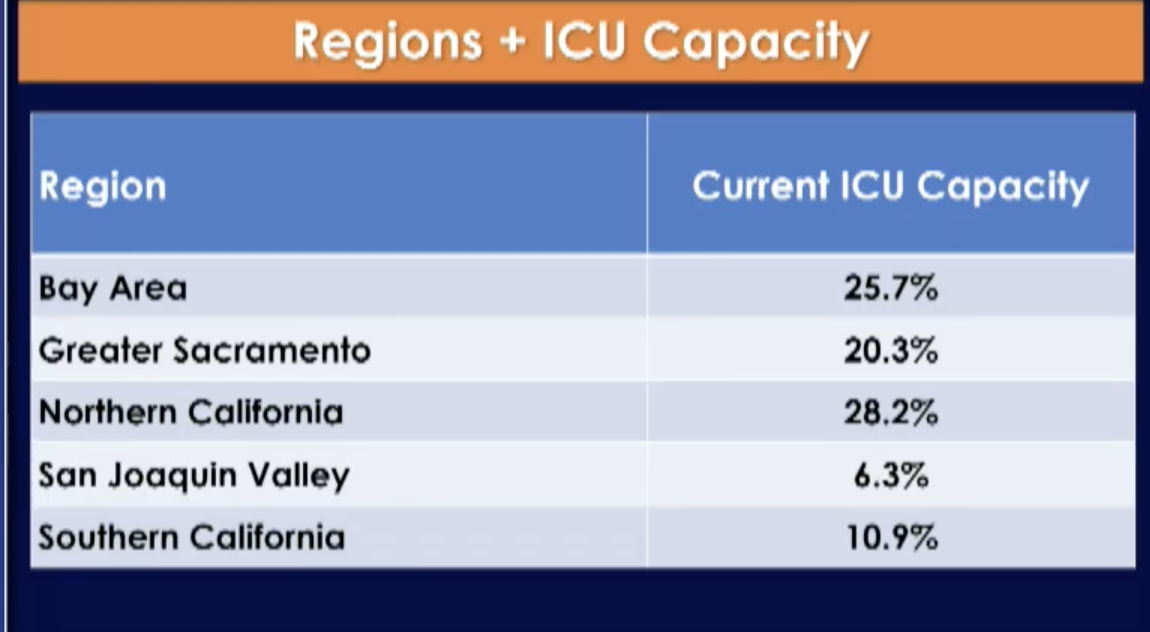 Those metrics were met over the weekend for Southern California and the San Joaquin Valley. They regions were then given 24 hours to make adjustments. As of late Sunday, Southern California was just about 10%, and the San Joaquin Valley dipping to a frighteningly low 6.3%. See chart. The Bay Area, while not below the 15% threshold, decided to adhere to the order anyway.

Hospitalizations are up 72% in the past two weeks, said the governor. Of those, 14% of patients had Covid-related illnesses. Overall, 63% of the state’s hospital beds were occupied.

There had been 69% increase in ICU admissions in the state over the past14 days. “As a state,” said Newsom, “what’s available in our critical care system is just 14%.” 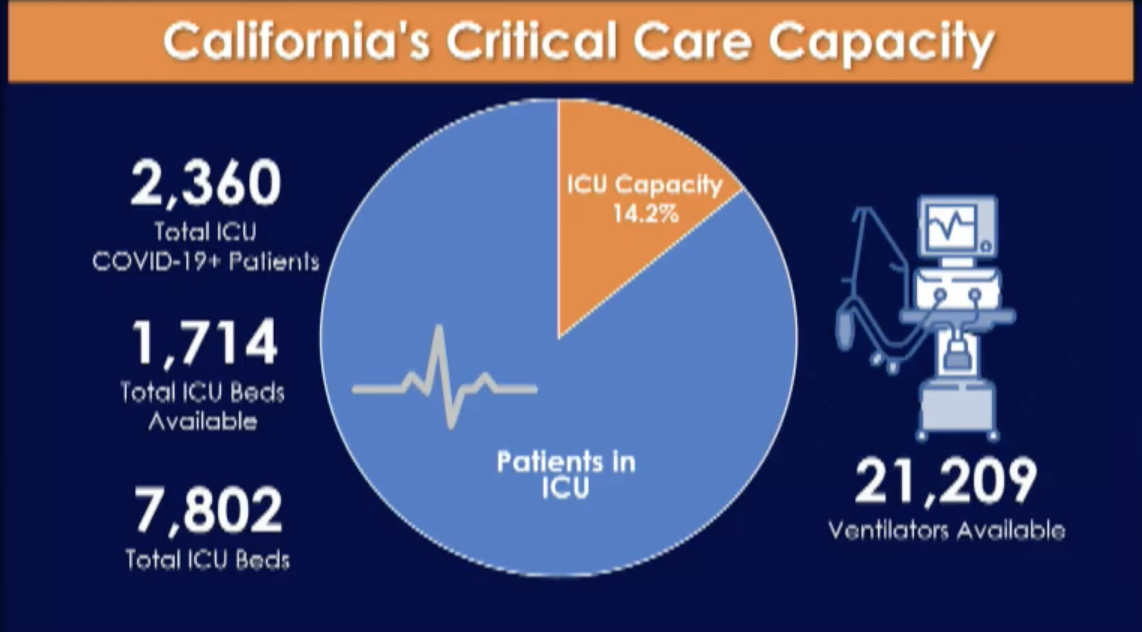 The 14-day test positivity rate was 8.4% on Monday. One month ago, the state was at 3.4% test positivity rate, said the governor. The 7-day positivity rate, which often lends a sense of which way numbers are trending, was at 10.5%. Testing is also rising, which indicates that it’s not just a matter of more infections being found, but that infections as a whole are growing. The state’s daily average is now 210,000 tests a day.

The governor also announced new protocols in Imperial County and Riverside, the latter of which now has a 16.5% test positivity rate. Those areas will be the beneficiaries of the “Home O2 program” which, according to an announcement, “Supports Covid-19 patients at home with oxygen and paramedic support.” The program will provide in-home oxygen support for 100 patients in Imperial County this week. A similar capacity will be deployed for Riverside and San Bernardino next week.

“The issue that remains paramount is staffing,” reiterated the governor. “Human resources are going to the be most challenging.”

The governor reported that the state had hired a staffing agency to build out its ICU personnel. There will be new 815 staffers, he said, as a result of the effort. At least 566 of those will be available by December 14. 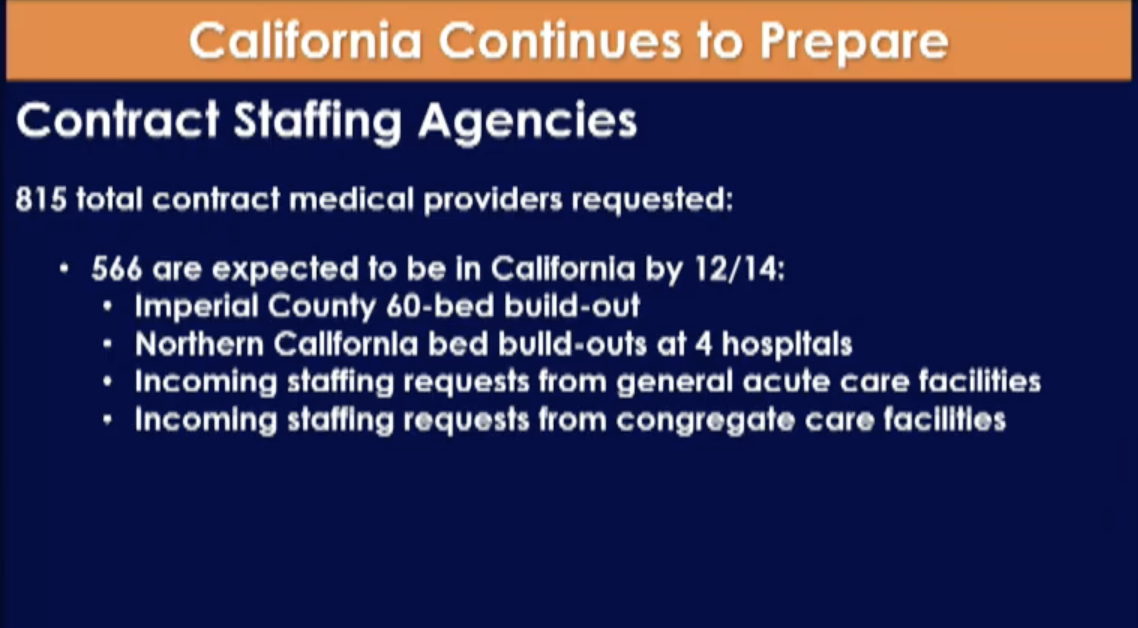 The governor said that the state has requested 160 staff members to assist its ICU “strike teams,” as he called them. He announced that, “The state is also working together to bring on another 100 limited term staff that would be ready to deploy for clinical care, infection control, or even vaccine administration if needed.”

The state had procured 900 members for a California Health Corps and was looking to bring on more.

The state also had nine additional facilities in “warm status,” meaning they can be stood up in 48-72 hours. Newsom said that, while “we have not turned the lights on,” the facilities were being prepped, and that the on in the Imperial County would be activated on Wednesday. See chart. 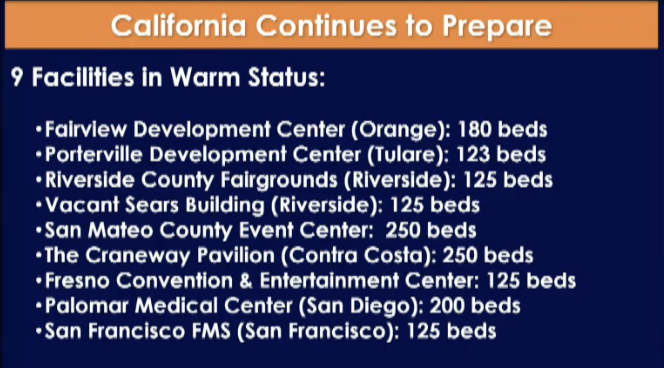 Newsom unveiled a “CA Notify” app developed by Google and Apple. It will alert residents when they’ve been exposed to someone with COVID-19.

Officials say the app uses bluetooth technology, promising it will not share identities or collect location data. “This will be opt-in, not opt out,” said the governor, noting that users will have to choose to use the app. “We value privacy,” he said.

The app will be available Thursday on the Google Store. For Apple users, the app has already been loaded onto their phones. To activate it, users need to go into their settings and turn it on.

You can watch Newsom’s press conference below.