The seriousness of the Covid-19 pandemic came home to California Gov. Gavin Newsom this weekend when he and his family had to quarantine after his children were exposed to the virus. The governor said his entire family had tested negative. “I feel perfectly healthy,” he said but indicated that he would continue quarantining.

The state announced its highest-ever number of new daily cases over the weekend, with an eye-popping 15,442 on Saturday. That shatters the record of 13,000-plus recorded on Friday and cemented the notion that California is in the midst of a record-breaking new surge.

In light of that, Newsom spent much of Monday’s presentation on California’s plan for vaccines. “I wanted to take the veil off,” he said.

The governor said the mass vaccinations for Covid-19 would “build off” experience the state has had with flu, SARS and H1N1, noting that the state delivers 19 million flu vaccinations annually. It does some within a 90- to 120-day period every year, he said.

Daily Coronavirus Deaths Are On The Rise In Los Angeles; Calculated To Triple Over Next Few Weeks

“The first tranche of vaccinations will be extraordinarily limited,” Newsom said, adding, “We’ve been working for months” to devise a distribution strategy.

The state will be prioritizing health care workers, first responders and those in congregate healthcare settings. Phase 1a of state’s distribution plan is to prioritize state’s 2.4 million healthcare workers. There is some concern that California might not get that many doses at first. Newsom said the state is planning for that as well. 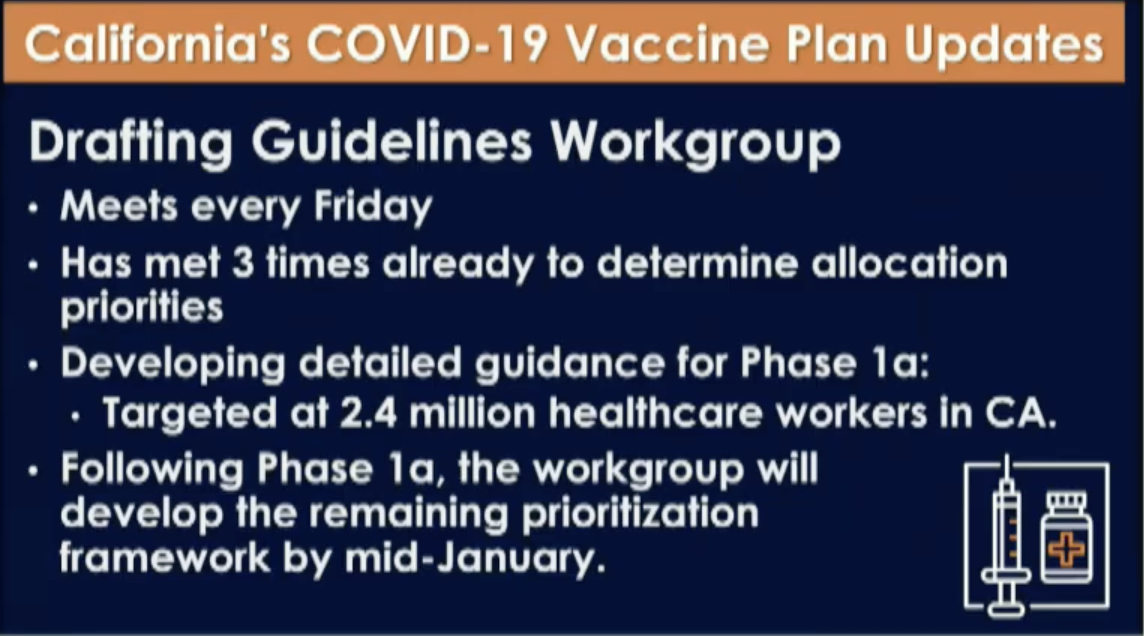 Phase 1 distribution recommendations will be ready for review by December 1, said Newsom.

Planning for Phase 2 and 3 will roll out beginning to mid-January, according to the governor. Mass distribution is a long way off, he warned.

The state is anticipating FDA approval of the first two vaccines in early December, according to Newsom. It will be “March, April, May, June, July where we start to scale and get into some of these subsequent phases,” he revealed.

As far as the vaccines from Pfizer and Moderna, state health officials have reviewed their Phase 1 and Phase 2 data. Newsom promised that the state will expedite the review of Phase 3 findings to turn a decision around in 24 hours. The governor also recognized AstraZeneca’s promising new vaccine, but did not discuss detailed plans around it.

He said the biggest problem lay with Pfizer’s vaccines, which must be stored at -70 celsius. The state is working on dozens of ultra cool freezers but, according to Newsom, transport is the most difficult part of the plan with Pfizer.

The state has acquired 16 such ultra cool freezers, which range in cost from $10,000-$15,000, and is distributing them. A number of “mini freezers” will be sent to smaller counties like Mono and Siskyu as well as urban areas “with an equity lens.” 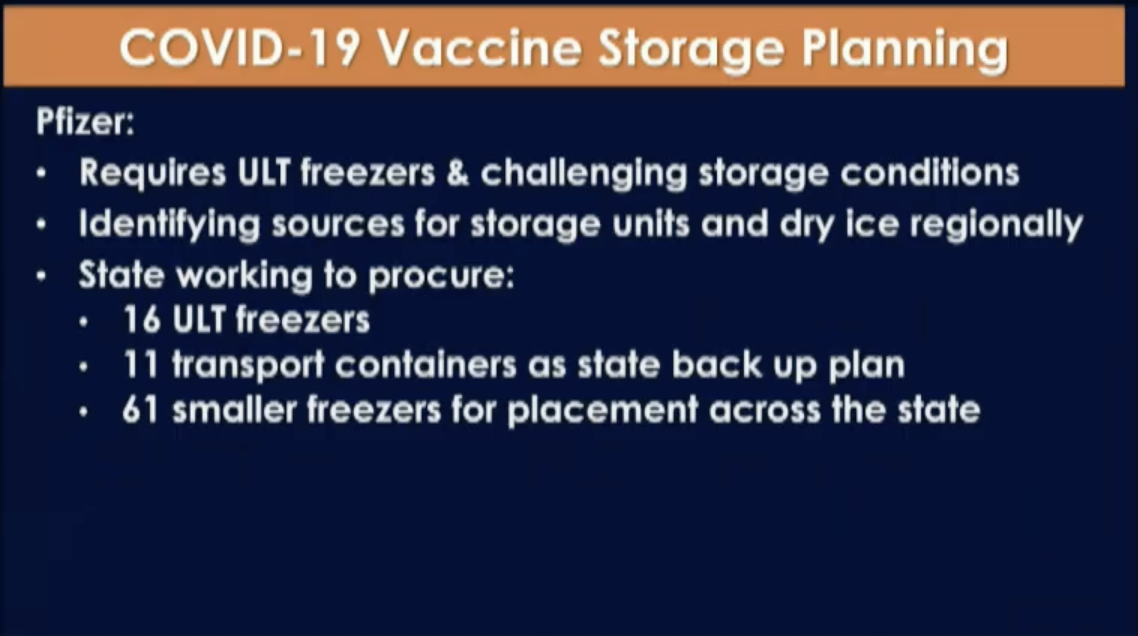 Even given the associated costs, “We’re not waiting for anything. We’ll find the resources,” said Newsom.

He noted the state had received $20 million from the CDC. Six million dollars of that is going to local health staffing. Ten million dollars is being spent on local health planning. But, he said, the federal government needs to step up much, much more in terms of financial support.

Mentioning the money appropriated for states earlier this year, Newsom said the “second round needs to be substantially more.”

In light of the unprecedented, rapid rise in COVID-19 across California, Governor Gavin Newsom on Thursday announced a limited Stay-at-Home Order. The order requires “generally that non-essential work, movement and gatherings stop between 10 PM and 5 AM in counties in the purple tier.” That means basically every county in Southern California and 94% of the state’s population.

“We’ve seen an unprecedented number and new rise in cases of Covid,” said Newsom on Monday.

He announced the state had seen 8,337 new cases to start the week. The 7-day average was a staggering 11,597. That means California is now averaging daily what had once been the all-time record from July. That was 12,807 in July 22.

The state delivered a record daily number of tests over the weekend with 265,000 in Saturday. Even with that, however, the state’s average test positivity rate is still rising, meaning the virus is spreading and the numbers are greater than what was been found thusfar. The 14 day positivity rate is 5.5% on Monday. It was just 4.8% last week. The 7-day test positivity rate is even higher, at 5.8%. That means the 14-day rate is likely to rise further.

“The 18-49 age cohort now represents 60% of all out cases.” That age cohort accounts for 7% of deaths, according to the state’s top health officer, Dr. Mark Ghaly. While it’s great deaths aren’t higher, that means more people are walking around spreading the virus.

Newsom said 5,459 new hospitalizations had been recorded. Covid-related illnesses are now 7% of the entire hospital capacity. That’s a 77% increase over 2 weeks, he said.

Over the same 2 weeks, there had been a 55% increase in virus patients occupying ICU beds he said. Such patients now account for 17% of all ICU beds.

“Hospitals are already seeing the impact of the surge,” Ghaly said, before indicating that the stress on hospitals is the “highest that it’s ever been,” according to a state hospital census.

Newsom announced early last week that he was beginning to implement the state plan to surge ICU beds, beginning with hard-hit Imperial County. One big issue however is not the beds, but staffing. ICU-trained nurses are in short supply and they cannot be trained in a short period of time. That means the state’s greatest challenge, especially as healthcare workers get sick, may be staffing. 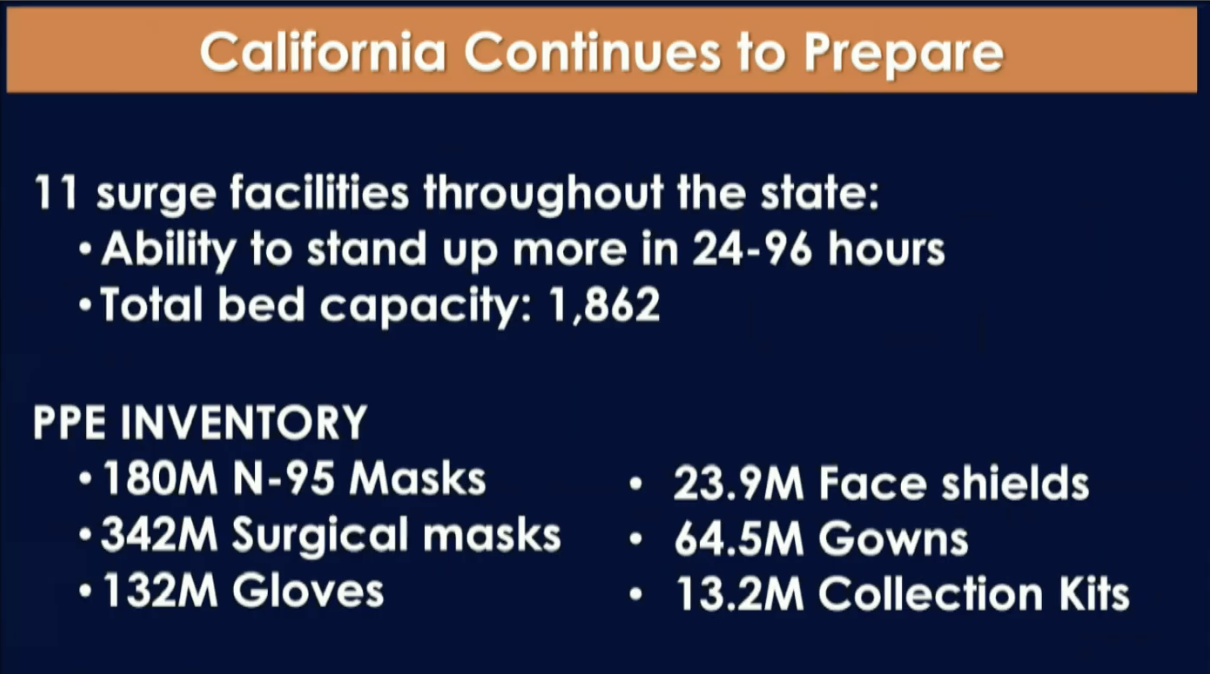 The limited Stay at Home Order is designed to reduce opportunities for disease transmission. Activities conducted during 10 PM to 5 AM are often non-essential, according to the governor’s office, and more likely related to social activities. Those type of gatherings have a higher likelihood of leading to reduced inhibition and reduced likelihood for adherence to safety measures like wearing a face covering and maintaining physical distance.

“There’s a lot of exemptions,” he said. Deadline reported on Friday that film and TV production workers are among the exemptions.

Newsom said the Stay-At-Home order would last until December 21, but could be extended. “We’ll see. We’re open-minded,” he said.

California’s Director of Health and Human Services, Dr. Mark Ghaly warned last week that if the surge does not stop, “All tools are on the table. We will explore further restrictions” if the tide cannot be turned.