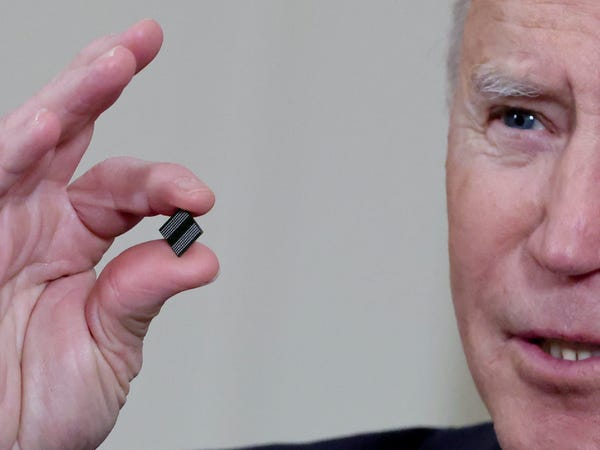 An ongoing computer chip shortage has impacted everything from cars to iPads to dog-washing technology. Chipmakers like Intel had already seen production issues pre-pandemic, but as with many industries, the pandemic brought a whole range of new supply-chain issues. The chip shortage is a problem for consumers wanting basically anything with a computerized component, which is much of the economy. Take cars as an example.

Automakers have been hit the hardest by the semiconductor shortage. In January, consulting firm Alix Partners estimated the automotive industry would lose $61 billion in revenue from the shortage this year. As Insider’s Katie Canales reported, demand for chips has gone up, as consumers scrambled to buy cars and other technology that utilizes them.

But as more cars went into production, chip competition went up. Since then, many carmakers have been forced to shut down plants and prioritize which models they produce, while car prices at dealerships have only continued to go up.

Last week, Tesla CEO Elon Musk said the semiconductor shortage has caused “insane difficulties” for the electric carmaker. Even Apple — a company that many thought would be able to dodge the shortage after it started making its own high-powered computer chips last year — said it will delay production on its iMac and iPad. 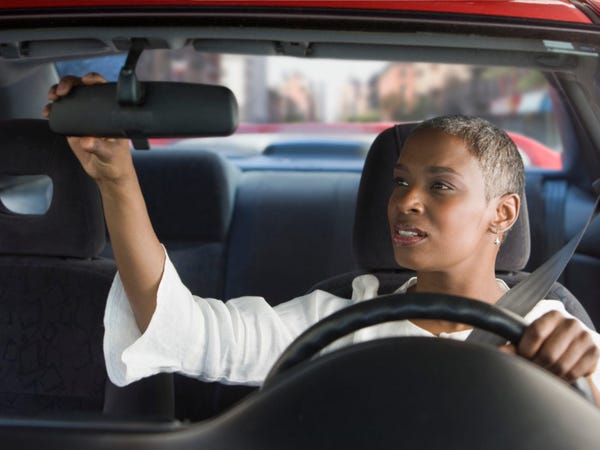 As USA Today reports, used-car prices are on the rise as the aforementioned chip shortages impact new car production, and buyers have turned to older ones instead.

Buyers are still hoping to get their hands on a new vehicle, creating a competitive used-car market. As Axios reports, used car prices are on the rise, with the average hitting $17,609.

It’s not all bad news for used car lovers, though: As USA Today reports, the trade-in market is hot. too, meaning your old car could be worth more right now.

And if you’re looking to rent instead of buy, you may also be out of luck: Insider’s Brittany Chang reported on the “perfect storm” hitting rental cars right now, with prices surging and demand increasing.

Americans are itching to go on vacation this summer, as more people are vaccinated and some restrictions loosen. That’s leading to far more demand — but rental car companies had sold off parts of their fleets early into the pandemic, leaving fewer cars to go around. 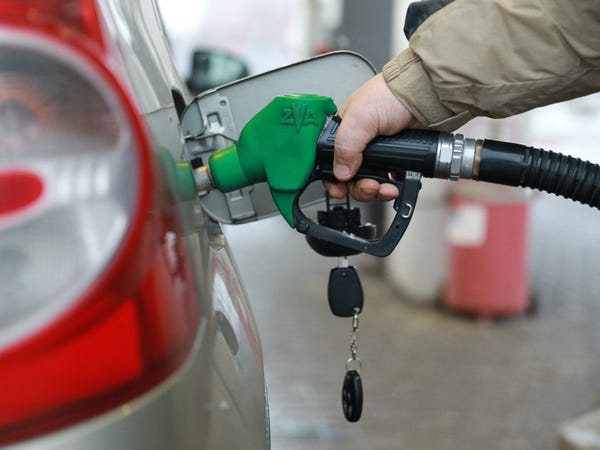 Gas prices have skyrocketed in recent months, jumping 22.5% in March from the previous year, according to the US Bureau of Labor Statistics’ Consumer Price Index. Much of the surge in gas prices started with the extreme Texas freeze, which halted a fifth of the country’s oil refining capacity in its tracks for weeks at a time. 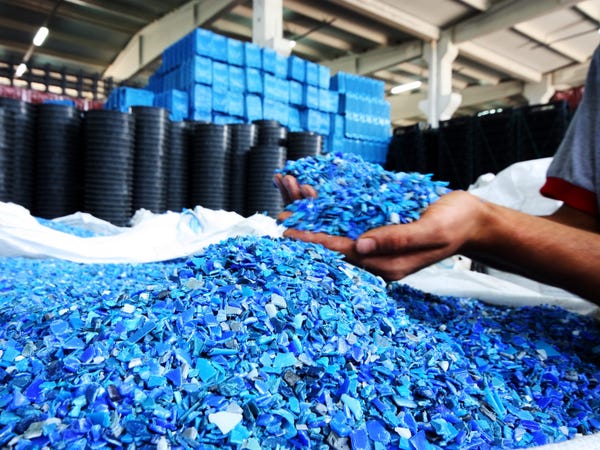 The devastating winter storms in Texas also left their mark on the plastics industry. As Insider’s Natasha Dailey reported, the state is a key plastics exporter — and the storms made many plants press pause, which are difficult to reactivate.

According to the Financial Times, rising plastic prices have led to an increase in packaging costs. Citing data from Mintec, the Financial Times reports that those costs have increased by nearly 40% from the start of 2020. Those are “historic highs.”

Palm oil, which is in a majority of those packaged products, also saw its prices climb, according to the Financial Times. That’s due to yet another labor shortage; the industry had already been contending with finding more sustainable production methods. The Wall Street Journal reported that increased shipping demand has combined with a lack of drivers and trucks to result in climbing shipping costs.

In September, Insider’s Rachel Premack reported that pay for truck drivers was on the rise, coming in at “record-smashing levels.” But the pay hike — and increased demand — comes after an exodus of drivers in 2019; Premack reported at the time on what some called a “trucking bloodbath,” as trucking companies saw profits fall, with some even going bankrupt.

Now, demand is surging, according to the Journal, and if everything continues as is, that gap could only deepen. 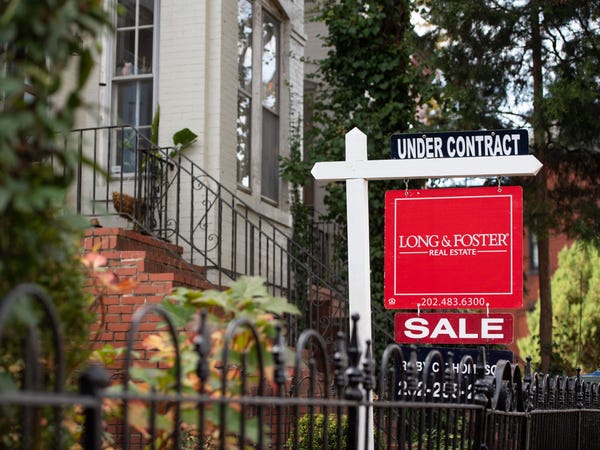 The US was facing a shortage of 3.8 million homes as of April, according to Freddie Mac. Home builders have been struggling to keep up with demand as remote work fuels interest in spacious housing, with house prices rising at their fastest pace in 15 years, The Wall Street Journal reported. Lumber prices are also driving the cost of new homes even higher.

Even vacation home rentals are at an all-time high. A house in the Hamptons rented for $2 million this summer. 85% of vacation rentals in popular destinations like Cape Cod, the Outer Banks, and Jersey shore are currently booked through August, according to rental site VRBO. 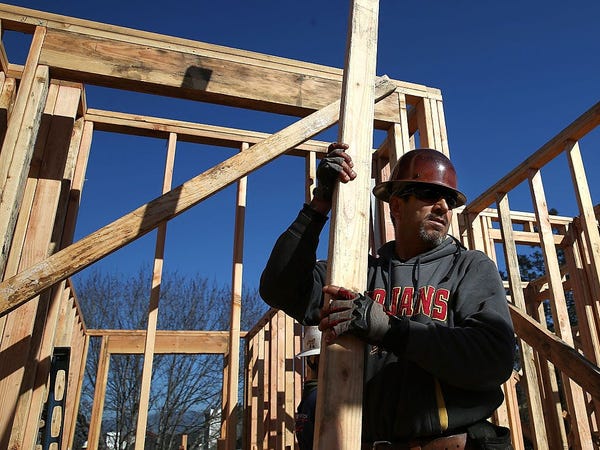 If you’re wondering why the houses around you are getting more expensive, look to their roots. No, literally: Lumber prices have soared, and, as Insider’s Ayelet Sheffey and Libertina Brandt reported, builders are even increasing house prices in an attempt to offset demand.

It’s due to another pandemic disruption, as lumber mills were forced to temporarily close for safety concerns. When they reopened, they couldn’t keep up with a scorching-hot housing market, goosed by a working-from-home economy, record low mortgage rates, and the need for personal space during the pandemic.

According to an April analysis from the National Association of Home Builders (NAHB), soaring lumber prices added $36,000 to the cost of a new home. Lumber prices “remain stubbornly high,” according to the report, due to mills shutting down, not ramping up production, and unexpected demand from big box retail and DIY-ers, and tariffs imposed on Canadian lumber. 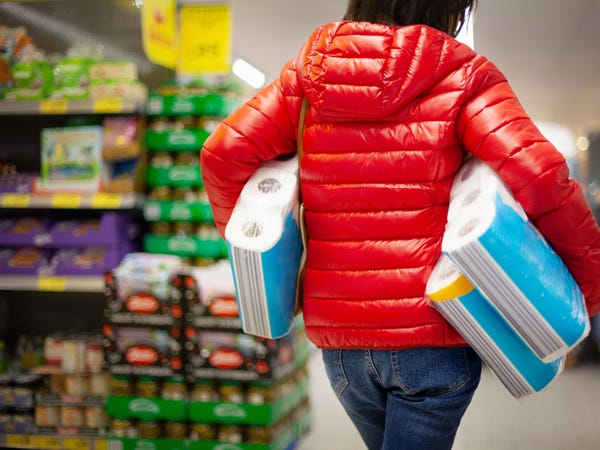 One of the biggest producers of the pulp used to create toilet paper told Bloomberg that port delays and high shipping costs are causing companies to push delivery dates back months.

Shortages and shipping delays are causing many companies to hike prices. Last month, Proctor & Gamble said they would raise prices for baby-care and feminine-care products, as well as adult diapers to combat shortages and shipping costs. The same week, Kimberly Clark hiked the price of its Huggies diapers and Scott toilet paper. 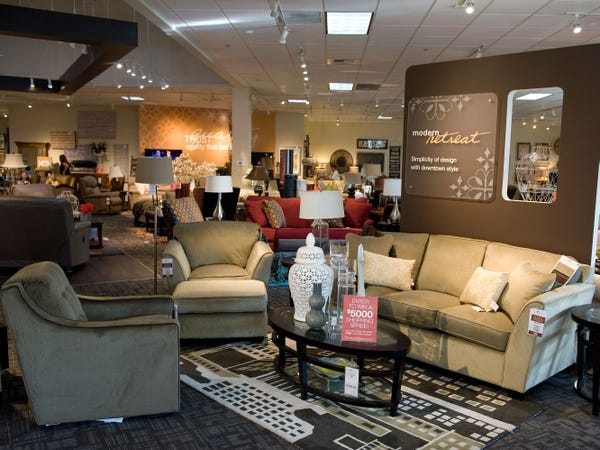 The work-from-home lifestyle helped the furniture industry boom, but to such an extent that customers are seeing delivery dates that are months out.

In February, La-Z-Boy executives said customers could expected delivery dates that are five to nine months out from the order date. Other furniture companies like Kasala, a Seattle based chain, said they don’t expect to get furniture parts until at least December.

Many US furniture stores use parts from China. The global shipping container shortage, as well as delays at key ports in Southern California have not only made the goods more expensive, but have also pushed back delivery dates by several months.

The furniture shortage has been exacerbated by a spike in homeownership as the number of available and unsold homes sits at record lows. In other words, a lot of new homeowners are waiting a long time for their new living-room sets. 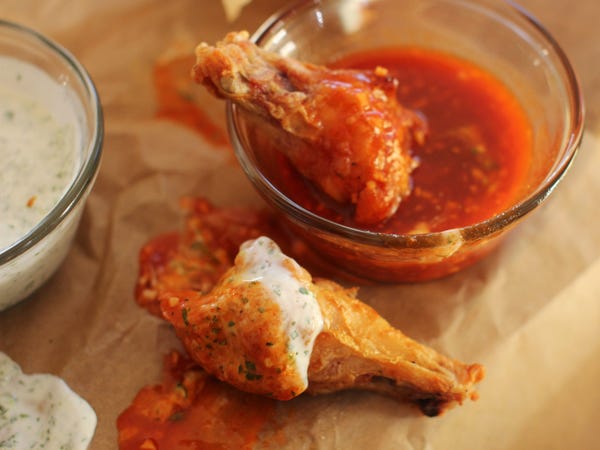 If you’ve been having trouble finding chicken wings, you’re not alone: They’re hard to come by, as supply tightens. Insider’s Avery Hartmans reported that chicken-wing supply is dwindling while prices rise. It’s due in part to increased demand and shortages caused by devastating winter storms in Texas.

The Washington Post reports that shortages go beyond just wings, with all chicken harder to come by. One phenomenon the Post notes: Fried chicken sandwiches, which have gained viral popularity in the past few years. McDonald’s has even launched its own. Insider’s Mary Meisenzahl reported that the KFC Nashville hot chicken has been so popular on TikTok that the chain is running out of the Nashville hot sauce for it. 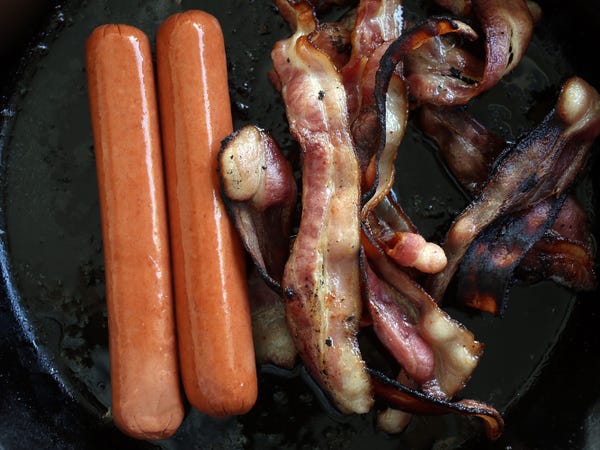 Not enough hogs is another issue. Or to put it another way, bacon and hot dogs will likely be in short supply this summer.

The pig shortage dates back to the onset of COVID-19 and outbreaks in at least 167 meat-processing plants forcing almost 40 plants to close as of June 2020. As vaccination rates pick up and people prepare for summer vacations and cookouts, analysts told Insider’s Natasha Dailey demand will outstrip supplies.

With pork companies still struggling to overcome lower production rates in 2020, the matter only intensified when high instances of disease hit the hog population this past winter. 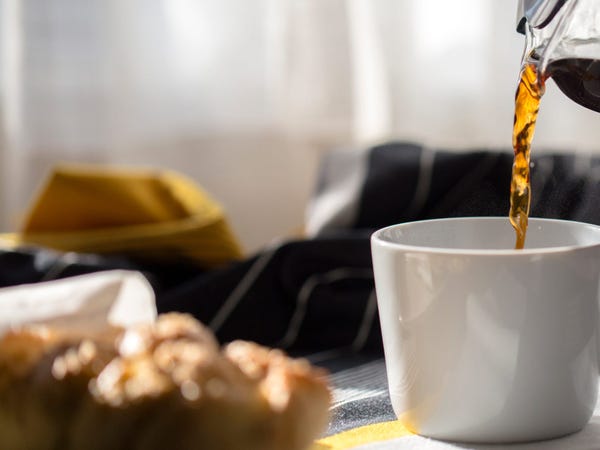 Dozens of mega-containers ships are waiting to dock off the coast of Los Angeles. The site accounts for about one-third of US imports and the backlog is causing ships to wait weeks to dock and unload.

Some companies are already seeing the impact on their shelves. In March, Costco said its supplies of cheese, seafood, and olive oil were running low.

General Mills said it has been forced to raise prices due to the delays increased shipping costs.  Coca-Cola also raised prices to combat the supply chain crunch. Neither company specified which products would be impacted.

Coffee has also been impacted by the delays, Bloomberg reported in March. Peet’s and JM Smucker, the brand behind Folgers and Dunkin’ coffee, have said they’re facing rising costs. Reuters reported that in February, port delays pushed coffee prices to their highest level in over a year. 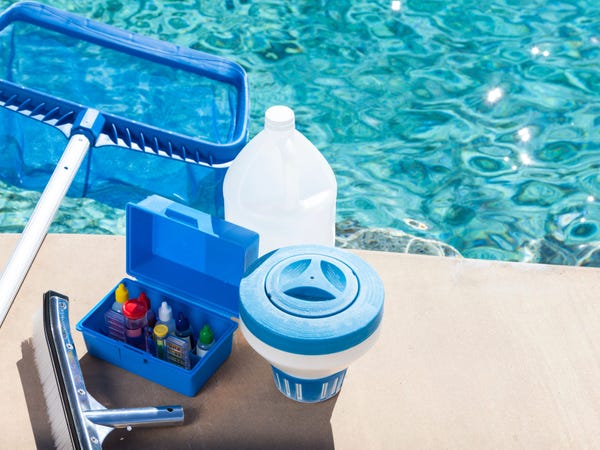 This summer pool owners will see the worst chlorine shortage in US history, according to CNBC.

Supplies of the chemical have been strained since a fire at the chlorine manufacturer BioLab in September. The price for chlorine used in pools has nearly doubled this past year and is expected to rise even more to meet demand this summer. 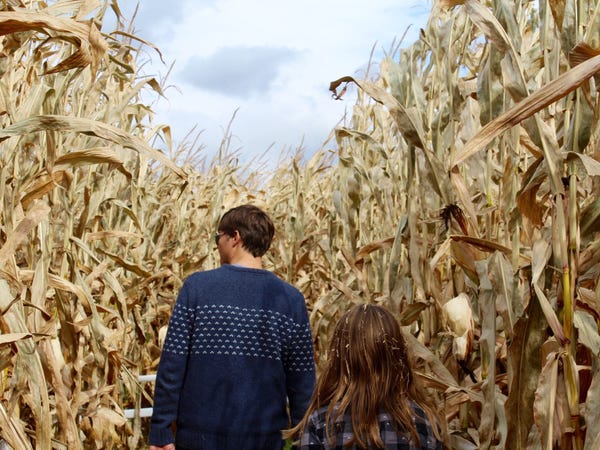 Corn is a key crop for many products, including fuel and different foods. As supply concerns loom, corn prices are popping off, according to Axios.

There’s a few reasons that demand is so high: After an outbreak of swine fever in China, pig herds were “decimated,” according to Axios, leading to huge corn demand in China. That spike in demand is coupled with corn crops in Brazil and Argentina experiencing both bad weather and pandemic-related labor shortages.

Now, corn prices are on a record-setting clip, rising by 16% in April alone.

And, as Fortune reports, there could be a domestic supply issue too. Droughts and a rough winter are both concerning — and if Americans crop can’t fill in the gaps, prices may pop even more. 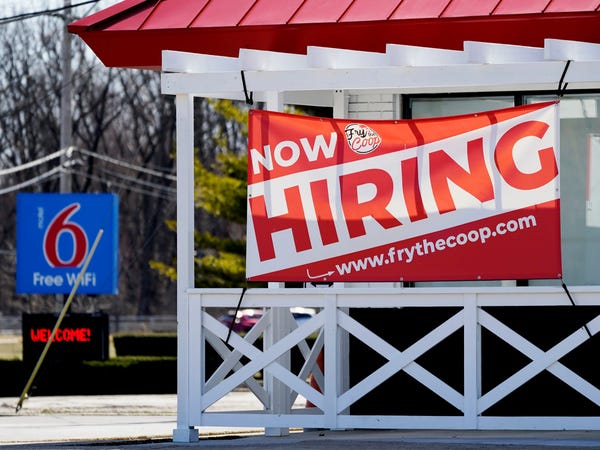 Finally, a commodity unlike all the others is in surprisingly short supply: workers.

Major labor shortages are hitting businesses across America. As Insider’s Kate Taylor reported, chains like Dunkin’ and Starbucks are struggling to find workers — leading to reduced hours and hesitance on opening indoor dining back up.

There’s a few possible reasons that unemployed workers are opting not to return, according to Insider’s Ayelet Sheffey. Those range from workers making more on unemployment benefits than in their prior work to continued concerns over COVID-19 to needing to provide childcare at home.

One potential solution for ending this shortage, according to Taylor? Paying workers more.