Charlotte Tilbury could be in line for a payout of at least £500m as the beauty company she founded goes up for sale with a price tag of more than £1bn.

Unilever, the consumer goods company whose brands include Dove and Ben & Jerry’s, and large beauty corporations including France’s L’Oréal, Japan’s Shiseido Corporation and Spain’s Puig, are all reportedly vying to buy Tilbury’s makeup and skincare firm.

Tilbury, a London-born makeup artist who grew up on the Spanish island of Ibiza, founded her namesake brand in 2013. The daughter of artists, she rose to fame working with supermodels including Kate Moss before developing products such as Pillow Talk lipstick and Magic Cream moisturiser. 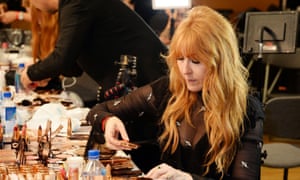 She has said she wants to create a “limitless makeup revolution for all women”.

Interest in Charlotte Tilbury comes amid a rise in personality-led makeup ranges which have won over the Instagram generation and provided heavy competition for traditional cosmetic brands.

In November, Kylie Jenner sold a 51% stake in her beauty business to CoverGirl owner Coty, in a deal that valued the reality TV star’s company at about $1.2bn (£965m).

Charlotte Tilbury’s sales rose 44.5% to £145m in 2018, according to the most recent accounts filed at Companies House, although it made a pretax loss of £2.1m. The accounts made clear that since then the company has launched in Space NK and Sephora stores in Europe and begun trading on Tmall, China’s equivalent of Amazon or eBay.

While it is not clear that Tilbury, 47, will sell or reduce her stake, her backers may have recognised an opportunity to cash in.

Tilbury is listed as a “person with significant control” of Islestarr Holdings, her brand’s parent company, on Companies House in a filing that makes clear she owns between half and 75% of the company’s shares and voting rights.

The venture capital firm Sequoia Capital, which also has investments in skincare firm Glossier and cycling and running app Strava, took a minority stake in 2017 and other investors include startup investment specialists Venrex, which previously put money into takeaway app Just Eat.

Other shareholders who could benefit from a deal include the photographer Mario Testino, the model Stella Tennant and Wendi Murdoch, the entrepreneur and former wife of Rupert Murdoch.

Charlotte Tilbury is working with advisers at Goldman Sachs and Jefferies Financial Group, according to Bloomberg, which reported that the company could choose a winning bidder as early as May.