‘Nehru once told JRD, “I hate the mention of the very word profit”.’
‘”Jawaharlal, I am talking about the need of the public sector making a profit!” JRD replied.’
‘Nehru reiterated, “Never talk to me about the word profit, it is a dirty word”.’
A fascinating excerpt from Shashank Shah’s The Tata Group: From Torchbearers To Trailblazers.

Fifteen years younger to Nehru, J R D Tata admired him as the heroic knight in armour and an apt leader for independent India.

However, four decades later, while penning the foreword to a compilation of his keynote addresses, JRD wrote, ‘I have often thought that if fate had decreed that Vallabhbhai Patel instead of Jawaharlal, would be the younger of the two, India would have followed a very different path and would be in a better economic shape than it is today.’

What caused JRD’s opinion to change over the four decades?

The most central being the approach, or rather the lack of it, towards economic development in the first three decades since Independence.

The nature of the Tatas’s businesses in core sectors such as steel, electricity and locomotives made it imperative for their companies to be heavily dependent on government orders and anti-dumping protection.

This required the maintenance of a fine balance between the Raj and the freedom movement.

Yet, whether under the Raj or post-Independence, their key focus of dialogue with the government of the day was India’s industrial development.

Farokh N Subedar recalled that whenever the Tata Group chairman went to North Block for a pre-Budget presentation before the finance minister, the focus wasn’t on a ‘wish list’ of things that were relevant for the Tatas alone.

The interests of the Indian industry at large were always a priority.

L K Jha, former governor of the Reserve Bank of India, recalled in 1986 that when he was a secretary to the government, JRD never approached him on behalf of any Tata company, but for the whole industry.

He wanted no favours, only fairness. In 1944, some of the most eminent industrialists of India were hosted by the Tata chairman to propose ‘A Plan of Economic Development for India’.

This was later known as the ‘Bombay Plan’ or the ‘Tata-Birla Plan’.

It was probably one of the first plans in the world prepared by capitalists, which laid a strong emphasis on social well-being.

It envisaged a largely deregulated economy with government investments in industries of national and strategic importance.

But policymakers found no inherent contradiction among the two.

In 1954, Nehru, impressed by his visit to China, incorporated in the draft of the Second Five Year Plan that India would move towards a ‘socialist pattern of society’.

Nehru once told JRD, ‘I hate the mention of the very word profit.’

‘Jawaharlal, I am talking about the need of the public sector making a profit!’ JRD replied.

Nehru reiterated, ‘Never talk to me about the word profit, it is a dirty word.’

In the general elections of 1971, Naval Tata (Ratan Tata’s father) decided to stand for elections as an Independent candidate from the South Bombay constituency.

It is believed Prime Minister Indira Gandhi was displeased with the Tatas’s attempt at contesting elections against the Congress candidate.

Furious and unforgiving, she is supposed to have told JRD, ‘So the Tata Group wants to set up a front against me?’

This was history repeating itself.

The context was different.

JRD was increasingly disillusioned by the Nehruvian approach to socialism, centralised planning and nationalisation of key industries.

To add to that, during the 1957 general elections, the Communist Party of India emerged as the second largest party in the Lok Sabha.

JRD believed the country needed a credible Opposition, and the leftist parties would further damage the prospect of free enterprise flourishing in India. Around 1959, Chakravarti Rajagopalachari, former governor general of India, started a new party in reaction to the Nehru-led Congress’s anti-industry and socialistic approach to governance.

He requested JRD’s support to the fledgling Swatantra Party.

He was concerned that public support to Rajaji would earn Nehru’s displeasure.

However, the transparent leader that he was, he communicated this decision to Nehru when he met him the next time.

On hearing about the Tatas’s support to Swatantra Party, Nehru blew up, ‘You have no business to do that.’

In order to pacify him and clarify his stance, JRD wrote a detailed letter to the prime minister dated 16 August 1961:

‘When I joined business, there was no black money. There was no corruption, for whom were you to corrupt? When you did not have a system of government control where you had to get a permit for everything.’

‘In the early days, taxes were also very low. Black money will always be there as long as taxes and controls are high,’ JRD affirmed this in the late 1980s based on his half a century of experience under different systems of government. It was the same during the years when Tata Steel and Tata Power were being established.

Dorabji Tata did face political problems with the Raj, but not corrupt officers.

The British officers he dealt with were men of their word.

The only gift they accepted was a Christmas hamper of tinned ham and wine.

Despite differences on political and economic grounds, JRD remained appreciative of the finer qualities of both Nehru and Indira.

Whenever called upon to advise or assist the government on matters of public interest and policy, the Tata leadership made their services available, much beyond the call of duty.

Between 1947 and 1984, the most difficult days for Indian businesses, the Tatas retained the number one position despite an unsympathetic relationship between business and bureaucracy.

Operating in core industries that were governed by strict price controls and severe caps on expansion, their achievement was laudable.

Throughout this period, JRD believed in keeping business and politics apart.

He felt it was wrong for businessmen to run newspapers, or undertake any activity of a political or quasi-political character.

In 1979, when JRD was asked why the Tata Group had not grown as fast as some other groups during the Licence Raj years, he said, ‘If we had adopted the means some others have, we would have grown twice as big as we are today, but we didn’t.’

Then he forcefully added, ‘And I would not want it any other way.’ 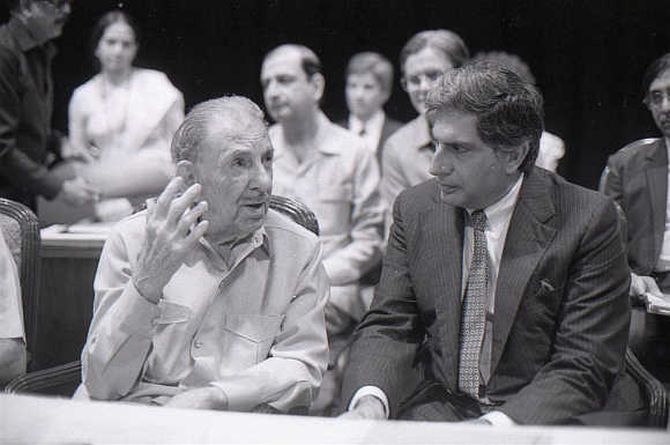 In a September 2017 interview he said, ‘I would be lying if I said there weren’t moments when issues came up and decisions had to be made (on taking shortcuts with the government).

‘Happily, every time, boards and leadership stood together saying — that’s not what we (the Tatas) do.’

‘Over the years, we have suffered because of that.’

‘I believe it is very important to come back at night and say I have not succumbed (to pressure).’

Excerpted from The Tata Group: From Torchbearers To Trailblazers by Shashank Shah, with the kind permission of the publishers, Penguin Random House India.