As car factories shut down, Ford (F), General Motors (GM), Fiat Chrysler (FCAU) and other manufacturers pivoted and started producing medical devices and personal protection equipment. Workers were retrained or newly hired to produce the new products. But even as the automakers began ramping back up regular vehicle production, they have continued to make much-needed supplies to battle the pandemic. 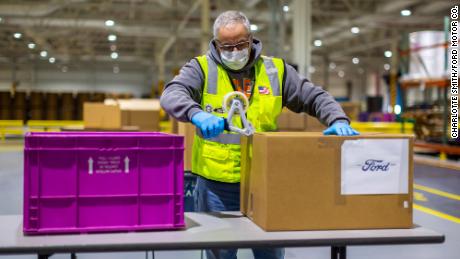 In part, this is because they require the supplies themselves. Production line workers, in particular, need masks and face shields to protect against infection while they’re working. But the companies are also addressing demand outside their own companies, especially as cases of Covid surge across the US, spokespeople and executives at Ford, Fiat Chrysler and General Motors confirmed.

Ford made about $50 million in profit from producing PPE and medical devices, like air purifying breathing masks and respirators, the company reported last week. Among other things, Ford worked with General Electric to produce 50,000 ventilators under a contract with the US Health and Human Services Department. But having pledged not to profit from the pandemic, Ford put the money into making and distributing a planned 100 million fabric masks by the end of 2021. So far, Ford has given 40 million face masks to a number of agencies, including the Red Cross, according to a company spokesman.
General Motors still employs up to 120 people at its Warren, Michigan, facility where the company produces fabric face masks. As of October 15, the most recent date for which figures are available, GM produced 13 million masks, 9 million of which were donated mostly to hospitals and public schools, GM spokesman Monte Doran said. The remaining 4 million masks were used by GM workers.

Fiat Chrysler has donated almost 10 million masks and more than 55,000 face shields, spokesman Kevin Frazier said. FCA has never sold the masks it makes, he said. The company’s donations include more than 400,000 masks and 30,000 face shields delivered to Protect Native Elders, a nonprofit that helps people living on tribal lands in the United States better protect themselves against the Covid-19 virus and cope with the impact of the pandemic. For a variety of reasons, Native Americans are disproportionately impacted by the virus, according to data provided by the group.
The help has been greatly appreciated, said Dmitri Novomeiski, one of the group’s founders.
“In early days of Covid, nothing was available,” he said. “You couldn’t even buy anything.” 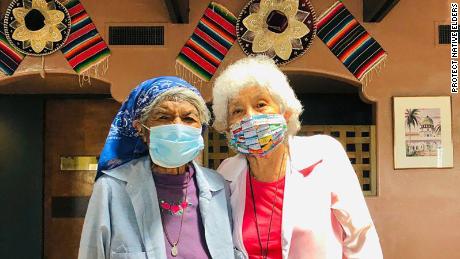 Also important, he said, were the Ram trucks Fiat Chrysler lent them for several weeks to help distribute the masks and other supplies, he said. In addition to the 100,000 masks a month Fiat Chrysler is providing, he’s hoping they can get more trucks to carry them in, too.
One thing the automakers have stopped making are ventilators. General Motor received a nearly $500 million contract for ventilators from the federal government in April. GM and its partner Ventec fulfilled the government’s order by the end of August and continued to make ventilators together for a couple months after that, a spokesman said. Now Ventec is making ventilators on its own.
According the National Governors’ Association, the need for ventilators is less pressing than it was at the beginning of the pandemic. A big production push early on helped fill out inventories of these devices which, unlike disposable masks and gowns, can be used repeatedly.

A return to making ventilators and other devices is possible, though, if that were ever needed, said Jim Baumbick, vice president for enterprise product line management, strategy and planning at Ford.
“We’re standing at the ready if we see an increased need or call to do that,” he said. “Until we see or hear that signal, we’re focusing on PPE, where the signal is clear and we just know we probably can’t make enough of it.”
Source: Read Full Article