San Francisco (CNN Business)This was meant to be a critical year for Blade + Blue, a San Francisco menswear company that launched eight years ago in founder Peter Papas’ basement.

But what was intended as a period of refocusing after a stretch of unbridled growth turned into a sharp pivot. The seller of classic “old school cool” men’s clothing is now using plainweave cotton fabric to churn out more than 7,000 face masks every week.
“It’s certainly been a bumpy ride, but one well worth seeing through to the end,” Papas said.

The dramatic shift in operations came after a drastic swing in its business.
For the first 10 weeks of 2020, business was going strong. Sales were up 30% through the first half of March, spurring ideas for product extensions and inventory ramp-ups. 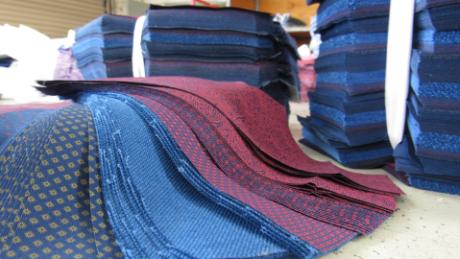 “I was really starting to see the next horizon for my business,” he said. “And instantly, it went away.”
As the Covid-19 pandemic and related stay-at-home orders grounded the Bay Area to a halt, Blade + Blue felt the impact immediately, as sales swung 60 percentage points downward. “That just rattles your bones as a business owner,” Papas said.
One or two orders trickled in each day, and certain inventories started to dwindle when some manufacturers stopped producing, severing the supply chain.
“When everything went down, it was traumatizing,” he said. “It’s more than a financial component; it’s an emotional component as well.”
Papas didn’t know if his business would survive. In early April, he started to receive emails from customers asking if Blade + Blue made face masks. 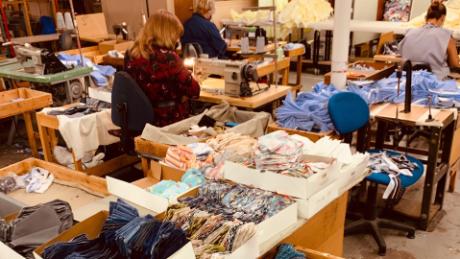 “The last thing I wanted to do was feel like I was maybe taking advantage of a bad situation,” he said.
Then came a call from his manufacturing partner in Texas, floating the idea of repurposing remnants from last season’s shirts and the upcoming summer shirts into face masks. As Papas chewed that over, he received more emails from customers not just asking about masks but pleading for them.
“I needed to hear that my customers needed me to do something for them … to save my business,” he said.
By April 9, the Blade + Blue materials were being sewn into masks, and now more than 1,200 are being produced daily, some of which are being donated to healthcare workers and first responders.
Papas now credits what was supposed to be a temporary shift with saving his business. He also has managed to add new customers.
Daniel Vivacqua, who lives in Cleveland, purchased four masks after his husband saw an ad for them on Facebook.
“There were a lot of ads for masks coming from all over the place,” he told CNN Business. “We both knew of this brand, and so we felt like they probably were legitimate.”

Now the masks are a new component of Blade + Blue’s business, Papas said once his business has caught up to the demand, he intends to refine aspects such as trims, details and fits — and ultimately have a “blur between fashion & function.”
“This pivot definitely came along at the right time,” he said. “And it has sort of breathed new life into not just my business but my hope for what can happen and my hope that when you’re up against the ropes, you have the resilience to come out better than before.”
Source: Read Full Article