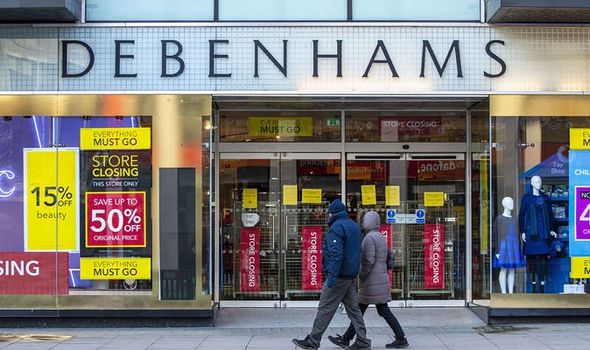 But the deal does not include the remaining 116 Debenhams department stores, which will close. It comes after nearly 180,000 jobs were lost and around 20,000 stores closed on our high streets in 2020. Debenhams has already shut six stores, including its flagship branch on London’s Oxford Street.

The scale of its redundancies is one of the biggest in retail since the collapse of Woolworths in 2008.

Debenhams had already clawed its way back from its April 2019 administration but was still struggling pre-pandemic.

The department store stood accused of failing to keep up with trends and had huge debts.

Debenhams had planned to continue a closing down sale when shops are allowed to reopen. 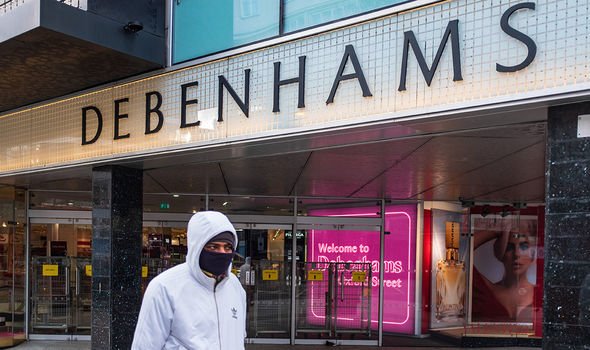 But with no end to the lockdown in sight and discounted stock being sold online, it is unclear how many of the branches will open temporarily.

The deal highlights the shift in retail with online magnates taking over.

Manchester-based Boohoo was only set-up in 2006 but is now worth more than £4billion.

Susannah Streeter, a senior investment and markets analyst, Hargreaves Lansdown, said: “Boohoo aims to break into the retail big time with this deal.

“It marks quite a journey for the company which started as a fast fashion upstart and is now turning into a sprawling empire, by scooping up household names in distress.”

Debenhams was a much-loved high street fixture for decades but its fate was sealed after JD Sports pulled out of a takeover last month.

The youthful fashion firm called the deal a “fantastic opportunity” to target new customers and launch into the beauty, sports and homewares market for the first time.

Mr Kamani, 56, said: “Our ambition is to create the UK’s largest marketplace.”

Instead, he tweeted: “Mad that we used to go into Debenhams every Saturday looking for cheap TVs with my dad.”

Boohoo has brought several high street brands out of administration, turning them into online-only operations, including Oasis, Coast and Karen Millen.

It hit the spotlight last year with accusations of sweatshop conditions in a Leicester supplier.

Dave Gill, of shopworkers union Usdaw, said: “It is devastating news for our high streets that Debenhams’ administrators have sold the company brand to an online-only retailer.

“Throughout Debenhams’ difficulties the company – and then the administrators – have refused to engage with Usdaw. The staff are being treated appallingly.”

Mr Gill said: “Each one of those job losses is a personal tragedy for the individual and store closures are scarring our high streets.”

Geoff Rowley, joint administrator for Debenhams, confirmed: “I expect that the agreement with Boohoo may provide some job opportunities.

“But we regret this outcome does not safeguard the jobs of Debenhams’ employees beyond the winding-down period.”

The expected closure of all remaining Debenhams stores, plus the threat to Arcadia’s branches, threatens to add 1.675 million square yards of empty retail space to the high street graveyard – equivalent to 194 football pitches.

“Unprecedented” was the cliché of 2020, but the word remains apt.

There is not a retailer in the country who remains unaffected by the ongoing pandemic.

Some have weathered the storm better than others, particularly those not forcibly closed by the Government, but everyone has felt the impact of COVID-19.

Last year saw the biggest decline in sales growth in over 25 years.

For physical stores selling non-food items – most of whom found themselves closed during multiple lockdowns – the situation was even worse, with sales down by a quarter compared to 2019.

These retailers saw their revenues drop by billions of pounds, hampering their ability to pay rent and other costs.

Given the chaos the virus is wreaking on our high streets and town centres, the administration of Debenhams may produce little more than a wistful shake of the head.

But its closure threatens tens of thousands of jobs, as well as many more businesses whose concession stands have been an integral part of the Debenhams experience.

Meanwhile, many will be looking to the horizon with one question on their mind: who’s next?

Footfall in 2020 was down more than 40 percent compared with the year before; it is unlikely to return to normal any time soon.

Even during closure many retailers are still accumulating rent debts.

From April 2021 they will need to contend with another financial burden – the reinstatement of business rates.

As a result, the industry will be on the line for an £8bn tax bill – with much of this levied against high street retailers who have been among the hardest hit in this crisis.

Government must reduce the damage this pandemic is doing to our local shops and communities.

The Chancellor must do what he can to ensure that retail thrives – allowing the industry to be a driving force in post-pandemic Britain.

To this end, Rishi Sunak should take the earliest opportunity to announce a targeted extension to the Business Rates relief for 2021, supporting those retailers who have been most badly affected by the crisis.

Furthermore, he should extend the moratorium on aggressive debt enforcement, helping shops to get back on their feet before landlords come knocking.

Ensuring that viable retailers, impacted by matters beyond their control, survive the pandemic is more than just protecting businesses – it’s protecting jobs, high streets and communities.

That’s something we can all get behind.

• Helen Dickinson is Chief Executive of the British Retail Consortium.