San Francisco (CNN Business)Pabst Blue Ribbon, the 19th Century beer that experienced a 21st Century revival at the hands of hipsters and artists, is taking its latest act to dispensary store shelves.

Pabst Blue Ribbon Cannabis-Infused Seltzer has debuted at certain cannabis shops in California as well as for sale online within the state.
The lemon-flavored sparkling water, which features a few milligrams of THC, doesn’t contain beer or alcohol. In fact, it’s not technically a product of Pabst Blue Ribbon or its parent company, Pabst Brewing. 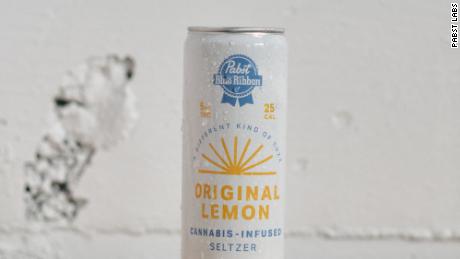 The PBR brand was licensed to Pabst Labs, a California cannabis company founded in part by former Pabst employees. No money was exchanged as part of the licensing agreement, Pabst Brewing says, and it does not have a financial stake in Pabst Labs nor will it receive any proceeds from the sale of the cannabis-infused seltzer.
It’s the latest example of the unique measures that mainstream companies are willing to take to get a toehold in an emerging industry that is still federally illegal in America.

In recent years, major US breweries and alcohol companies — among them Constellation Brands (STZ), Molson Coors (TAP) and Anheuser-Busch InBev (BUD) — have invested in or partnered with Canadian cannabis firms that have struck arrangements to sell products or eventually operate in the United States. Pabst’s route to market is similar to that of Lagunitas Brewing Company, the Heineken subsidiary that two years ago partnered with a cannabis firm to launch the THC- and CBD-infused HiFi-Hops sparkling beverage.
Cannabis was seen as a natural extension for Pabst Brewing, the company told CNN Business. The Los Angeles-based beermaker — known for other old-school brews such as Stroh’s, Lone Star and Old Style — has expanded its portfolio in recent years to include whiskey as well as hard coffee, spiked tea and alcoholic seltzer.
“Our community has been asking us to do something in the cannabis space,” Seamus Gallagher, Pabst Blue Ribbon’s senior brand manager, said in a statement emailed to CNN Business. “Until the legal landscape changes, we can’t produce this in-house.” 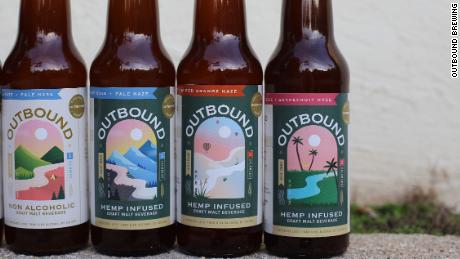 That’s where Pabst Labs came into the picture.
Former Pabst Brewing employees helped launch the company two years ago to explore and create offerings within the fledgling cannabis beverages space.
“No other brands in the category can really claim a 175-year history,” Mark Faicol, Pabst Labs’ brand manager, said in an interview with CNN Business.
Pabst Labs has started small with the initial launch — selling the seltzers in about a dozen dispensaries — but plans to grow that number to north of 30 by the end of the month. Pabst Labs will also sell the seltzer online to select regions of California.

This unique arrangement with Pabst Labs allows a mainstream company to test the waters in an emerging industry and further validate a niche sector while not exposing it to too much risk, said Britt Bulla, senior strategy director at Siegel+Gale, a global branding firm.
“This is the birth of a new category,” he said. “I think this is the time when these brands are going to be forming out exactly how we’re going to be enjoying cannabis over time.”
Source: Read Full Article