Hollywood has a bullying problem. “Hollywood has an entrenched and endemic issue with bullying that is exacerbated by the industry’s power imbalances,” according to the latest report from the Anita Hill-led Hollywood Commission for Eliminating Harassment and Advancing Equality in the Workplace. The report – the third from the Commission in the past two weeks – is based on a survey of 9,630 people who self-identified that they were currently working, pursuing work, or had previously worked in the entertainment industry.

According to the report:
• Women are twice as likely as men to report experiencing abusive workplace conduct often or very often;
• Non-union workers were twice as likely to report all bullying behaviors;
• Disabled workers were roughly twice as likely as those without disabilities to report all forms of workplace bullying;
• Female assistants under the age of 40 reported “stunning” rates of abuse that were two to three times higher than the overall sample;
• Workers under 40 years old were far more likely to report every form of bullying often or very often, with the reported rates decreasing steadily with age.

“In Hollywood, bullying is condoned as part of ‘paying your dues’ on the way up and has been openly displayed in films like 1994’s Swimming with Sharks and 2019’s The Assistant,” said Hill, who chairs the Commission, which was founded three years ago in the wake of the Harvey Weinstein scandal. “Bullying may once have been an accepted norm, but in 2020 workers understand the harm an environment rife with humiliating insults and sarcasm, swearing and throwing objects in anger, causes. And belittling, vulgar and demeaning language and behavior is a gateway to sexual harassment and other abusive conduct. It’s time for Hollywood to commit to treating all workers with basic humanity and dignity.”

Hollywood bullies tend to be supervisors – those in charge of workers’ hours, workloads, job assignments and whether a person is fired or promoted. And according to the report, men are doing most (68%) of the bullying. 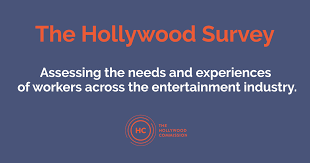 “The entertainment industry is replete with stories of abusive and toxic work environments – created by powerful bullies barking, swearing and calling people ‘idiots’ without regard for the humiliation or embarrassment of it happening in front of peers,” the report found. “The entertainment industry is, unfortunately, a breeding ground for bullies who are typically highly ambitious, opportunistic, combative, powerful and competitive. Long excused as ‘just the way things are,’ bullies often occupy leadership positions and set the tone for everyone else.

“But there are good reasons to stop treating abusive workplace conduct as a condition of ongoing employment. Workplace bullying has a devastating influence on the emotional well-being of the victim or target. Employers also pay a price for bullying in the form of lost productivity, increased absenteeism, rising health insurance costs and higher employee turnover.

“Establishing a culture of respect is also a key component to preventing sexual harassment. Sexual harassment often takes place against a backdrop of incivility – in other words, in an environment of generalized disrespect. This is especially true for gender harassment, because when it occurs, it is virtually always in environments with high rates of uncivil conduct.

“Bullying is generally defined as unwelcome behavior that occurs over a period of time and is meant to harm someone who feels powerless to respond. A single act usually isn’t abusive, unless it is especially severe or egregious. Any person can suffer abusive conduct regardless of whether or not they belong to a protected class. On the other hand, abusive conduct based on a protected characteristic – such as gender, age, or race – often constitutes harassment or discrimination in legal terms.”

The report found that when abusive conduct occurred, bystanders were present 69% of the time. To push back against bullying and harassment, the Commission is conducting bystander training with 450 entertainment workers. The training will include virtual reality training, web-based training, and six workshops – two for television supervisors (directors, producers, and showrunners); two for film (directors, producers, UPMs); one for casting directors, and one for production workers.

“Bystander intervention training teaches employees how to identify bullying or aggressive behaviors,” the report says. “Employees learn both direct and indirect intervention strategies to support a victim of bullying and are empowered to intervene when appropriate. Equipping employees with the tools to intervene creates a sense of shared responsibility to keep negative conduct in the workplace from being normalized.”

The workshops will review industry-specific issues concerning supervisor/subordinate and peer-to-peer bullying behaviors; provide answers on how to identify bullying, and how to respond to this type of conduct.

In its recommendations to the industry, the Commission said that workers should insist on accountability. “Because abusive conduct is not illegal, many companies and productions do not prohibit it in their codes of conduct or policies – making it more difficult to hold bullies accountable for their conduct – even though California now requires certain employers to deliver training on the prevention of abusive conduct.” Abusive conduct against workers based on gender, race or age, however, can constitute illegal harassment or discrimination.

In addition to complying with the law, the Commission urged industry companies to:
• Strengthen statements on bullying in codes of conduct by defining bullying in clear terms that do not require the employer to demonstrate the intent of the abuser – but is instead based on objectively observable behaviors;
• Establish policy and processes to address bullying complaints. If bullying occurs, recognize the behavior and act on it early – don’t wait to address problematic conduct until it has been repeated or has occurred over a prolonged period of time. Ensure the grievance process is fair and timely.
• Adopt the Commission’s bystander training or establish their own.

The Commission, co-founded in 2017 by Lucasfilm president Kathleen Kennedy and entertainment attorney and Time’s Up co-founder Nina Shaw, has released two other reports already – on accountability and on bias in the workplace – and will release a report on sexual harassment and assault later this month.

More than a third of those who took the survey provided narrative responses. Here is a sampling of statements they wrote:
• “I was told that ‘it’s not illegal to be an asshole.’”
• “Bullying and hazing are rampant in Hollywood and destructive to dignity, diversity, and innovation.”
• “I feel that everyday bullying, undermining, power play, scapegoating has not yet been addressed in Hollywood.”
• “I see that bullying is becoming more and more of an issue – it’s just an abuse of power in a different form. And if you don’t put up with it – they will hire someone else who will. Simple fact. It’s the way the industry has always operated.”
• “I’m tired of working for assholes, and assholes covering for other assholes, assholes enabling assholes. I just wanted to work in this industry to tell stories and collaborate with other creative people.”
• “Bullies run rampant. And go unchecked. And don’t get treatment. And no one can do anything, except choose not to work with them again. Which is not a solution. Training. On-site training, if possible. Especially conflict resolution training.”
• “Showrunners are capable of bullying anyone – people of all races, genders and sexuality. When this bullying is prolonged, the effect can be soul-crushing and the trauma long-lasting.”
• “The yelling and screaming and throwing things doesn’t really exist anymore. 15-20-25 years ago it was how things seemed to be. It was the norm. Sexual harassment was a very real thing, and still is. That said, it’s far less pervasive than it once was.”
• “Bullying, intimidation, and manipulation go on unregulated in the freelance film business.”
• “The lack of consideration towards workers basic rights represents a basic disregard for human rights.”
• “The entertainment industry needs to stop abusive and unprofessional practices. The industry needs to treat interns, assistants, and junior employees as human beings with rights.”
• “Working at a talent agency, I frequently witnessed and experienced blatant abuses of power. Truly some of the rudest humans, verbally and emotionally abusing their assistants for basically minimum wage. I had things thrown at me. My friends frequently were screamed at. It seemed absurd to report an agent for ‘being mean’ – but many of us would have our stomachs flip when our boss walked in or saw their phone number on the caller ID.”
• “There is no need for obscene language and/or aggression in the workplace. We’re not curing cancer. What we do is important, but we must keep things in perspective and treat everyone with decency and respect.”