2020 has been the most remarkable year for the global financial markets. After the Covid-19 pandemic triggered the worst crash in a generation, unprecedented stimulus measures and vaccine breakthroughs have sent stocks roaring back to record highs.

In a year in which at least 1.7 million people died from coronavirus and unemployment soared in a global recession, world stock markets are ending 2020 up 13% – despite the latest surge in cases forcing further lockdowns this winter.

The year began with immediate drama, when the Iranian general Qassem Suleimani was killed in a US drone strike at Baghdad airport, sending oil prices higher and markets lower. But fears of Middle East conflict soon took a back seat as troubling reports of an unidentified pneumonia-like illness in Wuhan, China, emerged. 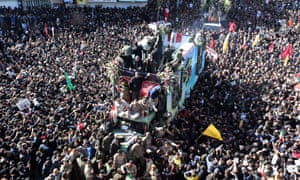 By the start of the Lunar New Year in mid-January, at least 26 people had died. Beijing’s stock market plunged 8% in its worst rout in more than four years when it reopened after the holiday, amid a scramble to shut cinemas, suspend travel, close factories and make people work from home.

Weeks later, as the virus spread, the shock that the Lombardy region in Italy was imposing its own lockdown triggered Europe’s worst stock market meltdown in decades. The realisation that politicians would deliberately freeze economic activity to try to slow the virus and prevent health systems being overwhelmed created a month of unprecedented financial turmoil. 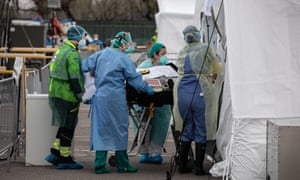 David Miller, investment director at Quilter Cheviot, says that as a working investment manager, 2020 was both scary and fascinating.

“We were facing a disease that we didn’t understand, and which could have been the equivalent of medieval plague. We now know that it’s really unpleasant but not nearly as bad as it could have been, but we didn’t know that at the time,” Miller explains.

“Plus, governments had stopped the global economy – something that had never been done before. Would that lead to an economic depression that would make the 1930s look tame?”

Heavy falls in the last week of February were followed by a massive selloff on the bourses in March as investors braced for a global recession and Donald Trump shocked the markets by banning flights from Europe. 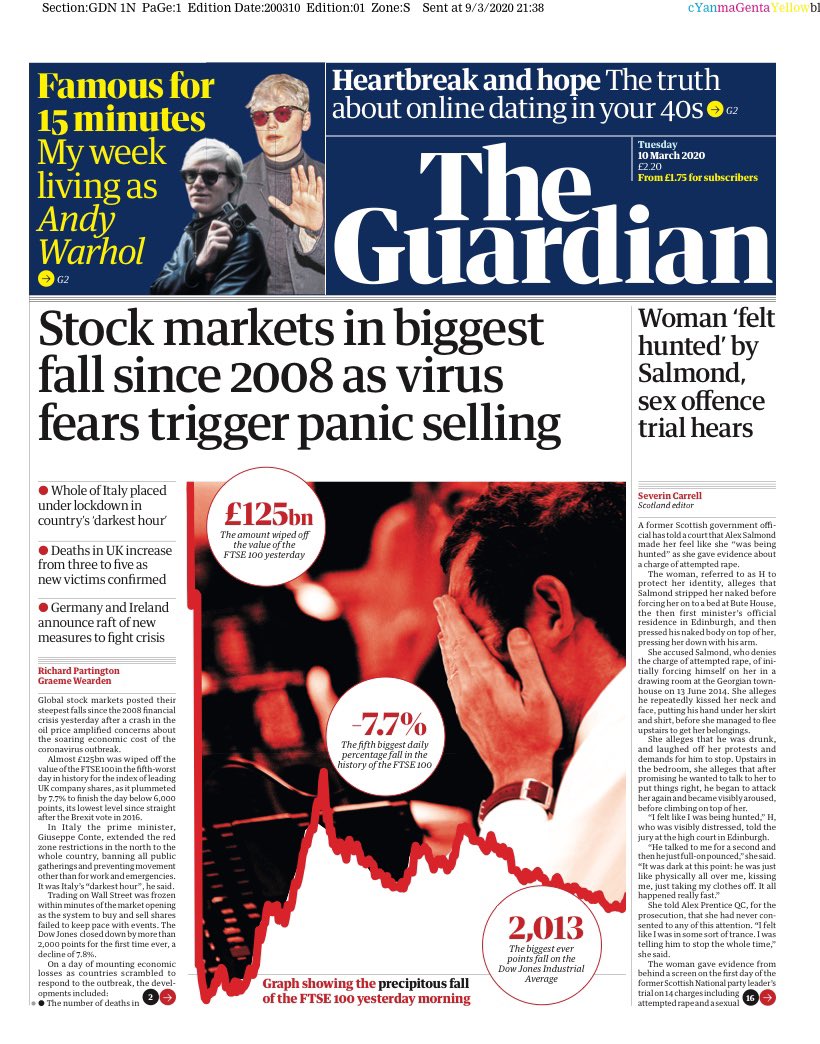 The UK’s FTSE 100 suffered its worst day since the 2008 financial crisis on 9 March, falling 7% on “Crash Monday”, followed by a horror show three days later when London and New York both posted their worst days since the 1987 crash, shedding a further 10% each.

Wall Street’s long bull market died, not with a bang but a wave of selling that briefly saw the Dow lose all its gains under President Trump.

The pound was also hammered, falling below $1.20 to its lowest level since 1985 amid a wild scramble for US dollars. Sterling was no one’s idea of a safe haven in a pandemic.

But what felt like economic Armageddon in March was actually the buying opportunity of a lifetime – if you had the nerve to pile into the stock market in the early stages of the lockdown.

The cavalry had arrived, with central bankers slashing borrowing costs to record lows and launching massive new asset purchase programmes, while governments tried to prop up their economies with packages such as the UK’s job retention scheme.

“Despite a plunge in output by up to 30% within two months and a bout of serious financial turmoil in early March, the world did not descend into a genuine financial crisis,” Schmieding says.

Miller agrees that those support packages for businesses and households were vital. “No one has ever stopped economic activity and locked down a country like we did this year. This is a first.”

As the Covid crisis escalated, the financial sector was in better shape than before the 2008 crisis. So in 2020, although there were queues outside the supermarkets, there was no repeat of the run on Northern Rock 13 years ago.

Miller says his experience of previous recessions over a 40-year career in the City gave “useful perspective” for 2020’s drama, but this year’s events were still unprecedented.

But hard on the heels of cratering equities and the ailing pound came another shock – Saudi Arabia and Russia launched an oil-price war.

With air and road travel in deep freeze, an oil glut was already filling up every spare tanker. Riyadh dramatically turning the taps up, not off, sent US oil futures plunging below zero as investors scrambled to offload contracts. 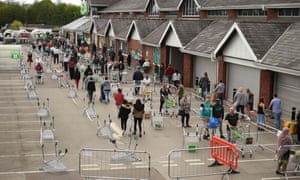 The spring also brought grim economic news – more than 20.5 million Americans lost their jobs in April alone, sending the US unemployment rate soaring to 14.7%, its highest level since the second world war.

But the markets were recovering much faster than the real economy, thanks to those huge stimulus programmes. Some analysts and investors were cautious, fearing the consequences of a second wave of Covid-19, but the rally had legs. After its worst quarter in over 30 years, the FTSE 100 posted its best three months since 2010 between April and June, as global markets staged a rapid rebound.

Tech companies were the clear early winners – as the pandemic pressed the fast-forward button on the move towards digitisation, video-conferencing and online shopping.

“The speed of the recovery caught everyone off guard,” explains Stephen Innes, chief global markets strategist at Axi. “The pandemic has compressed what we thought was going to happen over the next five years into three or six months.”

By the summer, economies were emerging from their deepest peacetime recessions, and attention turned to the recovery. Talk that frenzied money-printing by central banks would lead to an inflationary boom swept the gold price to $2,000 per ounce for the first time ever in August.

Global markets recovered their pandemic losses as investors began to price in a return to economic normality in 2021, and the prospect of yet more stimulus measures.

Tom Stevenson, investment director for personal investing at Fidelity International, says there hasn’t been the same sense of panic as in 2008, apart from the rapid slide in February and March.

“Even though this year has been difficult for many, I wouldn’t say investment-wise it’s been more challenging than 2008-09. Back then, the crisis felt much closer to the financial markets, and unlike the credit crunch, the pandemic has always seemed like a problem with a solution, namely the vaccine,” Stevenson explains.

2020 also brought a fresh wave of retail investors to the market. The FAANG technology titans of Facebook, Apple, Amazon, Netflix and Google-owner Alphabet helped the Nasdaq to jump more than 40% this year. Tesla enjoyed the most astonishing run, up almost 700% in 2020.

9 March Deutsche Bank strategist George Saravelos: “The market is in the process of pricing a global recession.”

18 March Pershing Square manager Bill Ackman: “Hell is coming … America will end as we know it. I’m sorry to say so, unless we take this option [a one-month break]. We need to shut it down now…. This is the only answer”.

19 March Bank of England governor Andrew Bailey: “We are in an absolutely unprecedented situation. Just the sheer uncertainty we’re having to deal with … is absolutely being writ large in financial markets.”

14 April IMF chief economist Gita Gopinath: “It is very likely that this year the global economy will experience its worst recession since the Great Depression, surpassing that seen during the global financial crisis a decade ago.”

14 July Allianz’s chief economic adviser Mohamed El-Erian: “The financial stress caused by Covid-19 is far from over. Investors should brace for non-payments to spread far beyond the most vulnerable corporate and sovereign borrowers, in a reckoning that threatens to drag prices lower.”

6 October US Federal Reserve chair Jerome Powell: “The recovery will be stronger and move faster if monetary policy and fiscal policy continue to work side by side to provide support to the economy until it is clearly out of the woods.”

2 November The then CBI director-general Carolyn Fairbairn: “Gas tanks are depleted, factories run down in so many businesses across the country, in retail, in hospitality. Our aviation sector is absolutely on its knees. We are heading into winter, a bleak midwinter. This is the run-up to Christmas. It is the most important time for so many firms.”

23 November Ryan Detrick, chief market strategist at LPL Financial: “Although 30,000 [points on the Dow] isn’t much different than 29,999, there is something special about those big milestone numbers.”

Those stock market gains boosted the wealthiest the most, intensifying the economic inequality created by a pandemic that hit lower-paid workers in areas such as hospitality particularly hard.

“The people who most need the money don’t have it to invest, unless they took a flier on Amazon or Tesla, but most didn’t,” Innes points out.

The London market lagged behind the wider rally, though, hamstrung by its lack of big tech firms, and abundance of miners, oil giants and banks, all bruised by the global downturn.

By the autumn, a resurgence of Covid-19 cases and new restrictions pushed the FTSE 100 back down to a six-month low. But then came a record-breaking November for global markets.

Many on Wall Street had started 2020 quietly expecting Donald Trump to be re-elected. Never mind the unpredictability and trade wars, went the theory, just enjoy the promise of lower taxes and deregulation.

But by the time Joe Biden had triumphed, money had already poured into renewable energy stocks, along with cyclical companies, in anticipation of increased spending on infrastructure and new stimulus moves from a Democratic White House.

Biden’s win prompted a rally after a weak October, which accelerated when Pfizer brought the news everyone had been hoping for – successful vaccine trial data. Global stock markets surged to new record highs, with a frenzy of buying lifting beleaguered “value” stocks such as airlines and hospitality firms, on optimism of a better 2021. 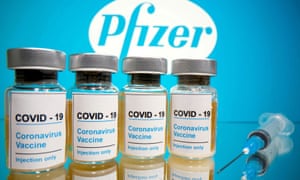 The year wrapped up with fresh records, as the Federal Reserve pledged to keep monetary police very loose until the US economy had recovered. First the Dow hit 30,000 points, then bitcoin broke through to $20,000, and raced to $28,000 days later. Quite a revival, given the cryptocurrency had slumped to $6,000 during the March crash. The tech boom refused to abate, with Airbnb’s share price doubling as it floated on the Nasdaq.

As Airbnb’s shares go through the roof, we need to challenge the Big Tech monopoly | Will Hutton

As the year ends, MSCI’s All Country World index of global shares is more than 13% higher for the year, and two-thirds higher than its March lows.

Innes says 2020 was the toughest of his 30-year career. “I’ve never seen anything like it, both the pace of the compression, and then the rebound. Things happened 20, 30 times faster than ever seen before, and I’ve never seen such a strong, concerted, reaction from central bankers either.”

Brexit also weighed on UK stocks this year, and was one reason the FTSE 100 fell behind other markets – and is still down 12% for the year. As negotiations reached a climax in December, the pound hit a 31-month high over $1.36, then suffered a late wobble before the final deal was agreed. Although the agreement is thinner than hoped, particularly for services, UK stocks still rallied to a nine-month high once fears of a disorderly Brexit abated.

But it was another rough year for those who trusted their savings to the bank, rather than risking the ups and downs of the financial markets. With interest rates at record lows, cash savings have languished again.

“Deposit rates at high street banks are barely above zero and even tying your money up for 10 years in UK government bonds [gilts] will currently earn less than half a per cent per annum, if held to maturity,” says Simon Young, portfolio manager at AXA Investment Managers.