Joe Biden’s taken on a lot of opponents over the years but the NFL and COVID-19 threw out the David vs. Goliath script last night, at least in the ratings.

Rescheduled from Sunday after New England Patriots’ quarterback Cam Newton and Kansas City practice squad quarterback Jordan Ta’amu tested positive for the coronavirus over the weekend, the 7 PM ET kick-off between the Pats and KC was the bigger winner on Monday night.

Lead by QB Patrick Mahomes, Kansas City thrashed the Patriots 26-10 on the field and conquered the night for CBS with 12.7 million viewers and a 3.6 rating among adults 18-49 in the early numbers. Now those fast affiliates will change later, but ain’t nobody catching up with this unique Monday game on a broadcast network.

That includes the former Vice-President of the United States.

In a socially distanced live town hall fat 8 PM ET rom Miami, poll leading Biden took questions from NBC Nightly News anchor Lester Holt and a curated selection of undecided voters. On the night that a COVID-19 infected and visibly short of breath Donald Trump made a seemingly pre-mature return to the White House from Walter Reed Medical Center, there was only one topic at hand and the Democrat was in fine form.

However, in terms of the ratings, Biden snared a 0.5 among the key demo and 3.8 million viewers in the unadjusted metrics. Again, like the NFL results, sure to change, those numbers right now are down 17% among the 18-49 and 4% in sets of eyeballs from what the former Celebrity Apprentice host received when he appeared at an ABC News town hall back on September 15.

Having said that, another qualifier must be added here: Unlike Trump’s stint on the Disney-owned network last month, Biden’s town hall last night was also aired live on MSNBC and CNBC – which certainly had viewers of their own, if you know what I mean?

Overall, in the early numbers, CBS won primetime with a 2.6 rating and 9.4 million viewers. Among the rest, NBC and Univision were tied for third place among the 18-49s with a 0.4.

And there was more on TV besides politics and pro-football last night.

Leading out of Biden’s Town Hall was American Ninja Warrior (0.4, 2.13M) which dipped to season lows.

Meanwhile, at ABC, Dancing with the Stars (0.9, 6.01M) dropped in the demo while Emergency Call (0.6, 3.49M) slipped a tenth from last week’s debut. However, it should be noted that ABC’s numbers will be adjusted in finals due to local market NFL preemptions in Atlanta and Milwaukee.

We will update with all the NFL numbers as well as total numbers from Joe Biden’s town hall later today. In the meantime, here’s how things look right now: 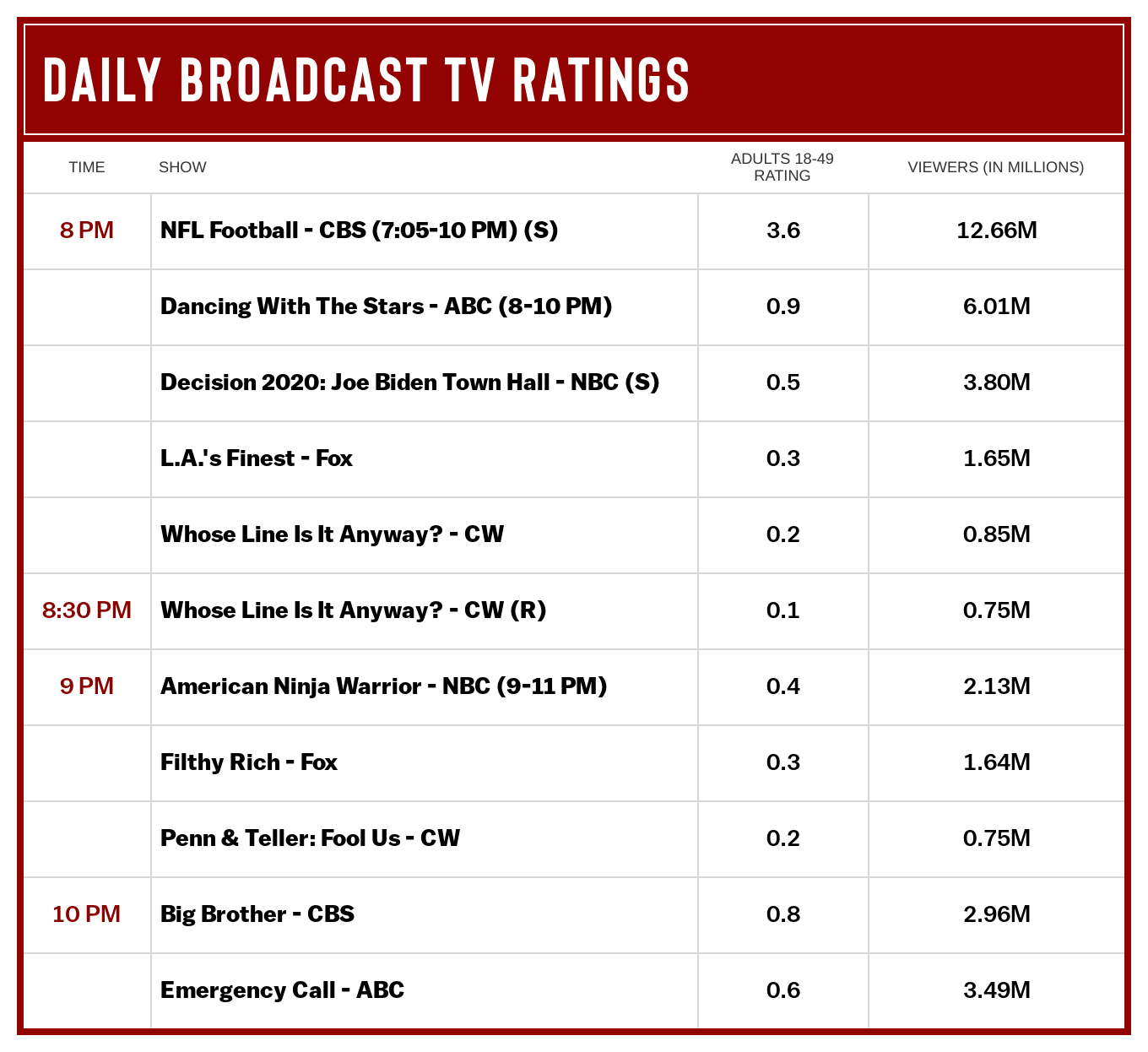 A White House coronavirus task force member says Trump barely meets them anymore, and is only getting updates from Mike Pence and anti-lockdown advisor Scott Atlas instead