The competition which BigBasket faces now is with the big three – Amazon, Walmart, and Reliance. 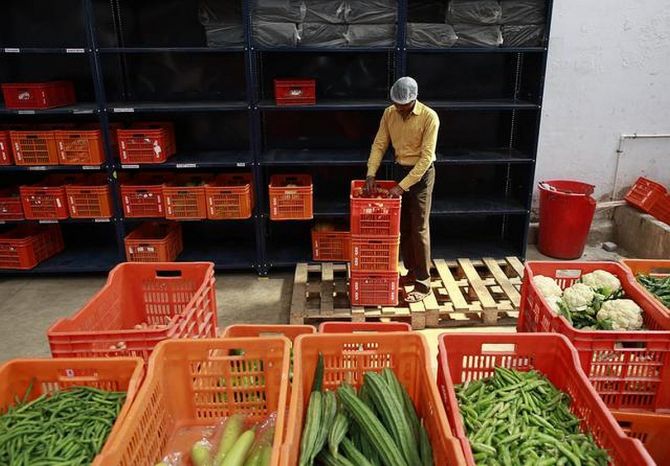 Online grocer BigBasket, which is in final-stage talks with Tata Group to sell majority stake in the company, could be doing this because of lack of visibility in terms of investments from large investors, say experts.

With big players such as Amazon and Reliance making serious bets in the space and investments from Chinese players looking unlikely, the company will need serious bucks to stay in the game, they add.

According to sources, the company is in final-stage talks with Tata Group and the deal could be sealed in a matter of days.

“The competition which BigBasket faces now is with the big three – Amazon, Walmart, and Reliance.

“If BigBasket’s biggest investors want to bet on it, they will have to write out a big cheque.

BigBasket is, therefore, looking at someone it can partner with or strategic investors like the Tatas who can top up the investment further, adds Meena.

Reports suggest that the Bengaluru-based online grocer is in talks with the salt-to-software conglomerate to sell around 50 per cent of its stake in the company for around $1 billion, with China’s Alibaba, which is the largest investor in the company, looking to exit.

BigBasket also fits the criteria for Tata Group, which is now looking at something in retail to go omnichannel because it realises that pure-play will not help it in the long run.

“It will be a good deal for both if it goes through,” says Meena.

According to a Redseer report, online grocery has seen Covid-induced tailwinds.

Coupled with participation from large conglomerates, it is likely to witness high growth.

From an overall 0.3 per cent, it could touch 2.3 per cent of the overall food and grocery market by 2024, which would make it a $18-billion segment.

“We keep talking to several firms, but nothing has been firmed up.

“Our e-commerce play will be really big and we’ll not contend with a minor stake in any company,” a Tata Group spokesperson had earlier said in response to a potential stake purchase in BigBasket.

Earlier reports had also pointed out that the Mumbai-headquartered conglomerate was also in talks with Snapdeal and IndiaMART to buy stake in the companies to strengthen its online presence.

“For them to have serious play online, inorganic is the quickest route.

In August, Tata Sons chairman N Chandrasekaran had also made it public that the group was building a SuperApp that would go live in December.

The group’s holding company is overseeing the project, with inputs from consumer-facing businesses, including Trent, Croma, and Tata Cliq, among others.