“I again want to sound an alarm that we’ve been sounding for the last month,” said Los Angeles Public Health Director Barbara Ferrer.

“We’re on a very dangerous track to seeing unprecedented and catastrophic suffering and death,” she warned. “I’m making a request to everyone to stay home.”

Ferrer reported a record number of 13,815 new coronavirus cases on Friday. It was up from the previous high, which was on Thursday. What’s more, even as the number of tests delivered rises, the daily test positivity rate has jumped to 14.4%.

The number of people hospitalized in the county rose to 3,624, said Ferrer. But, she warned of much greater numbers to come. Looking at the current number of cases, Ferrer said it’s predictable that in two weeks, over the course of one day there will be 1,685 new ICU admissions. There are roughly 2,100 ICU beds in L.A. County. 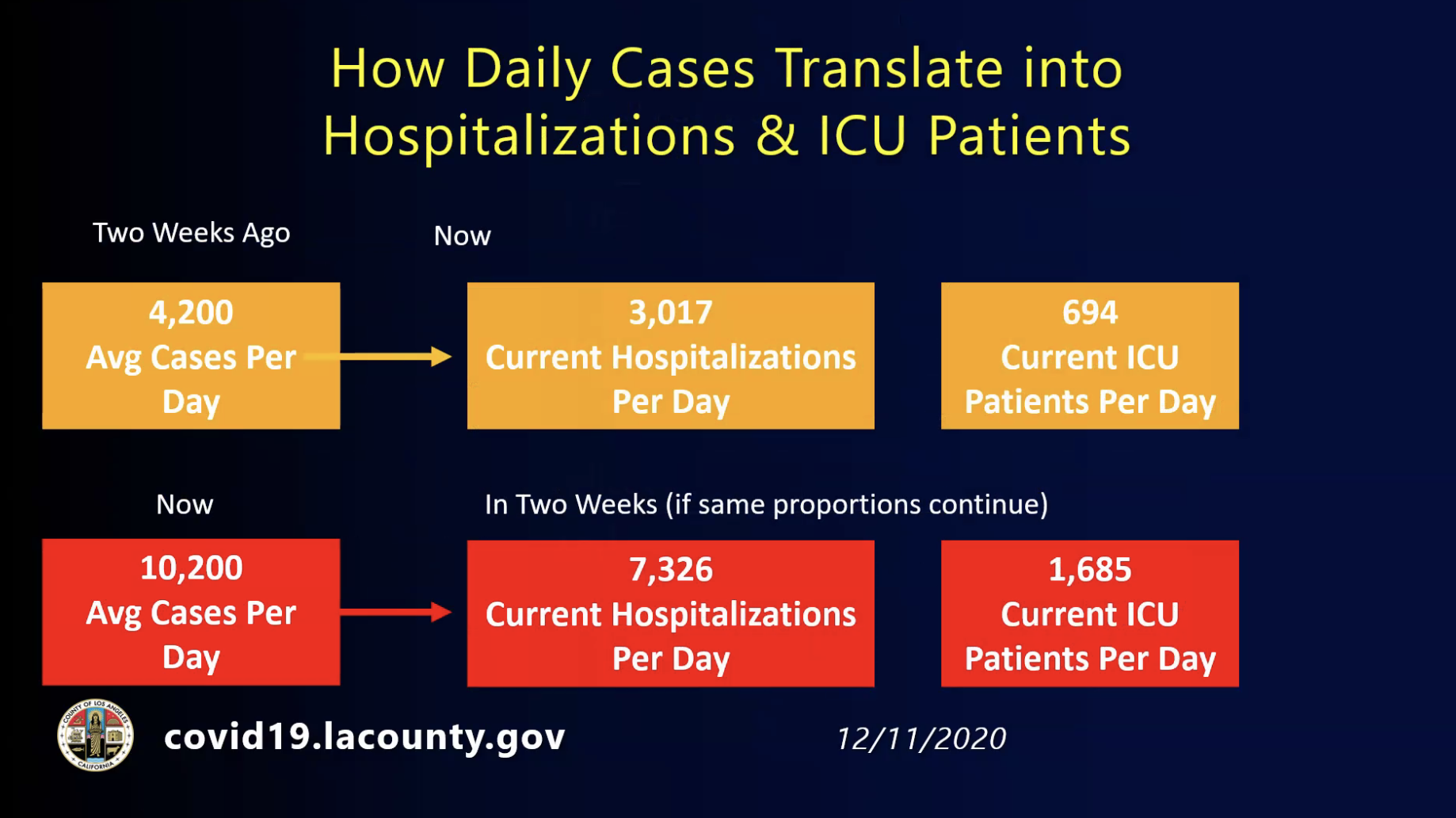 “This is what we would call a Thanksgiving surge,” said Ferrer. “We had a surge and now we have a surge on top of a surge. Should this be followed by another surge from another holiday, it could be catastrophic.”

That dire possibility prompted Ferrer to warn of further restrictions. “If we see surge upon surge with the winter holidays,” she said, “we may need to look with the state at other measures.”

Those measures would be necessary, she said, to “try to prevent the collapse of the healthcare system.” That was not a far-fetched scenario.

On Thursday Orange County hospitals were directed to implement surge plans and cancel elective surgeries in response to a “crisis” situation that could cause that county’s emergency medical system to “collapse.”

The county’s percentage of available ICU beds went from 11.2% to 11.3% Thursday, but according to a new state metric for “adjusted” ICU bed availability, the rate went from 4.9% to 3.5%.

The state on Friday estimated the ICU bed availability in the 11-county Southern California region at 6.2%, down from 7.7% on Thursday. The figure does not necessarily reflect a real-time picture of actual available staffed beds, since the state adjusts the percentage based on the ratio of COVID-19- positive and non-coronavirus patients.

Referring to photos from other countries of sick people dying on gurneys in the halls of hospitals, Ferrer said, “We’re all going to pay a very high price for the actions we have taken in the past.”

On Thursday, L.A. Mayor Eric Garcetti announced a massive jump in daily Covid-19 cases, up 2,000 over the previous record set Sunday, to 12,819 new cases. Not long ago, that would have been an eye-popping number for the entire State of California.

There are 3,634 virus-infected people hospitalized in the county. That’s a 6% increase just since Wednesday and a new high.

ICU availability in Southern California had dipped to just 7.7%, he said.

Health orders have been in effect about 11 days. If we’re going to see an impact of that

The news came on the same day that California saw the highest number of COVID-related deaths ever at 220. That, as the nation at large on Wednesday suffered its highest daily number of coronavirus-related deaths at over 3,000.