At the start of the pandemic, Maya wasn’t paying too much attention to investing. But some of her friends — bartenders and DJs whose work dwindled during a period of social distancing — were. With extra time on their hands, they opened accounts on the startup brokerage Robinhood.

“They would start tweeting at each other all of these acronyms and dollars and rocket ships,” Maya, who declined to share her last name for professional reasons, told Insider. “And I’m like, ‘What? I don’t understand what’s going on.'”

Then GameStop happened. At the height of the meme-stock frenzy that gripped the market in January and led to a heated congressional hearing last week over the saga, Maya downloaded Robinhood.

We now know how that story ended. As of Wednesday, GameStop had plunged 90% from its January 28 high of $483 per share. She said the app approved her account days after the dust settled and that she missed out on the stock’s surge. But the 30-year-old said she was newly interested in investing and seeking out educational resources online. With a lot of noise to sort through, it’s been challenging.

The flurry of news articles at the height of the trading frenzy last month referenced investment jargon “like you were already supposed to know what it meant,” Maya said, which made it difficult for someone new to the world of retail trading to break through.

Online traders like to say stocks are going to the “moon” to show how bullish they are, but many are left stargazing from the ground, wondering how to get in on the action. Maya’s story is emblematic of the barrier to entry in stock trading that millions of other fledgling investors face.

An influx of people doling out their experiences with investing — even if they stop short of calling it financial advice, as a disclaimer — have also emerged on YouTube, TikTok, and other platforms. While digitally savvy finance influencers are nothing new, they have larger audiences than before, as online forums have grown.

The noted online trader Keith Gill, who goes by Roaring Kitty on YouTube and DeepF—ingValue on Reddit, gained a dedicated following as one such expert who loves shares of GameStop.

He said before the House Financial Services Committee last week that he does not have clients or “provide personalized investment advice for fees or commissions,” and was not a financial advisor or selling securities when he previously worked at MassMutual. Still, online traders tracked his moves religiously and counted him as an inspiration.

Last month’s wild fluctuations in some stocks like GameStop, AMC, and BlackBerry — yes, BlackBerry — stirred a spectrum of feelings among investors, from envy to confusion to fear of missing out (FOMO). When those stocks came tumbling down, first-time investors and veterans alike witnessed a dramatic example of trading’s tremendous risk.

Now that the dust has settled somewhat, financial firms have recognized that there’s demand for stepped-up resources for novice investors to learn about the markets. Firms are scrambling to meet growing demand from at-home traders on do-it-yourself investing apps and — as all those firms say is a chief priority for them — they’re keen to teach new users how the market really ticks.

For retail traders — particularly younger, less experienced ones — last month’s trading episode may have only fomented an already brewing threat to their financial well-being: the temptation of outsize returns.

Historically, “it was a big deal if you could get a 15% return a year, and now that’s a foreign concept to them,” said Garrett DeSimone, the head of quantitative research at the options-prices research firm OptionMetrics. “Fifteen percent? That gets laughed at. That was Warren Buffett’s target.”

“For them, if they started investing in the last year, they’re interested in upwards of 50%,” he said.

As trading commissions have largely disappeared since 2019, and the self-directed trading and investing space has become intensely crowded and competitive for a new generation of digitally native investors, brokerages have come under a microscope for their levels of service and how they make money.

Representatives for the largest brokerage platforms say education has long been a pillar of their offerings for new investors, but they have made adjustments to their offerings as new users have flooded their platforms.

The largest brokerages have rolled out new educational features as they have reported surges in retail-trading growth, and some have more tools planned for this year.

The investing giant Fidelity, which reported it had 33.2 million brokerage accounts as of December 31, hosted its first Reddit “ask me anything” thread with the trading and services expert Gregg Murphy earlier this month.

Perhaps “the most interesting time of my career has been the market environment over the past few weeks,” Murphy said in a description of the AMA, which had about 1,600 comments. The firm is now considering future opportunities with Reddit, a spokesperson said.

Charles Schwab, which acquired TD Ameritrade last year but operates its brokerage platforms separately, is in the middle of revamping its center of resources for trading education that will roll out over the next few months as a result of clients’ growing engagement, a spokesperson said.

The average age of users accessing TD Ameritrade’s education offerings, meanwhile, has fallen from 53 to 45, with the largest growth among users between the ages of 18 and 29 and 30 and 39, Lorraine Gavican Kerr, TD Ameritrade’s head of investor education, said.

Interactive Brokers, a Greenwich, Connecticut, brokerage, reported it had a record 1.07 million client accounts as of December 31, up 56% from the same time last year.

“We take this very seriously and have sought to ensure, while making it easier to learn and trade, we are not gamifying the trading experience,” said Kalen Holliday, a longtime spokesperson for Interactive Brokers who taught an online introduction to mutual funds course for clients and left the company this month. 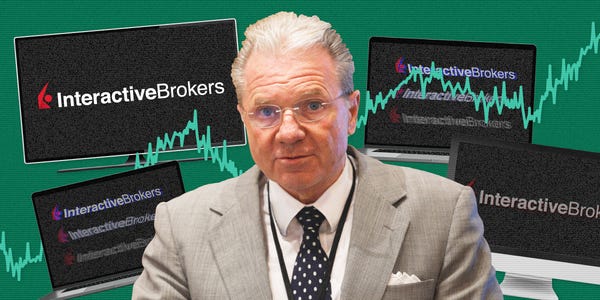 Interactive Brokers has long had more of a sophisticated clientele than other self-directed platforms, with customers who are typically well-versed in options trading and other advanced strategies.

Still, the firm has bulked up how it teaches clients. It redesigned its collection of offerings last year — features like webinars, online courses, and blogs — and placed them under a new banner called IBKR Campus. It has also expanded its team that’s solely focused on education.

Within the past eight months, Andrew Wilkinson, formerly the firm’s chief market strategist, was appointed director of trading education and now oversees IBKR Campus; Jeff Praissman, formerly a senior analyst, was named senior trading-education specialist; and the firm added Ali Magnani to the team as a video producer.

Another brokerage that has ridden the wave of recent market commotion is Public.com, a service founded in 2019 that markets itself as making stock investing a “social” affair.

It’s raised millions in venture capital from celebrities like the EDM band The Chainsmokers, the actor Will Smith, and the football player J.J. Watt. Earlier this month, it raised $220 million in funding, its Series D, from investors including Accel, Greycroft, and Tiger Global Management. It has raised about $310 million in total.

Public.com was also the first online broker-dealer to announce last month that it would ban payment for order flow, a popular practice among zero- to low-commission brokerages that has come under scrutiny since the GameStop saga. It enables brokers to cash in on trades by earning compensation for traders’ orders from external market makers that execute the orders on the exchanges.

It’s a step the company said would contribute to increased “transparency,” something that young investors want. 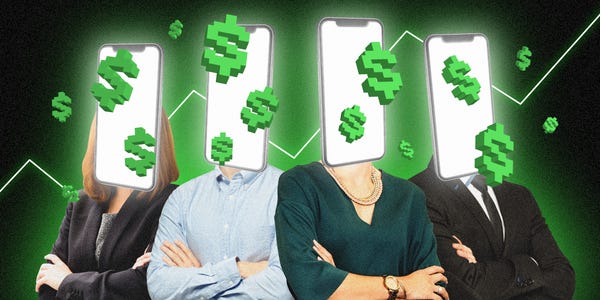 In a recent phone interview with Insider, a senior Public.com executive said the meme-stock frenzy would shine a light on retail trading and lead to more consumers knowing an extra shade about how it works.

“For the first time, I’m sure, this week, people are starting to Google, ‘What is short selling?’ look into, ‘What do hedge funds do?'” said Katie Perry, Public.com’s vice president of marketing who also heads up the company’s educational offerings for investors.

As a broker-dealer, Public.com can’t dispense investing advice. But it can implement some fail-safes into its user experience to help serve as a warning for retail traders if they’re about to make a risky play or encourage them to build a longer-term portfolio.

One tool Perry pointed to was the app’s safety labels, which she likened to a “speed bump” that’s native within the app. The labels appear to caution investors if they’re about to make a trade on a volatile security and double-check if they want to proceed with the purchase.

Another tool is a resource that enables investors to itemize a long-term portfolio of companies that they plan to invest in for the long haul.

“It’s not black or white,” she said. “People might have some things that they believe in and they want to build long term, and maybe they have something that’s shorter term.”

But the reality of the situation is that no number of fail-safes can restrain an investor who is bent on making risky plays from doing just that.

“When these conversations enter the mainstream,” Perry said, “there is that FOMO moment, or you’re following along and you get wrapped up in the hype, but you don’t fully understand why this particular investment or company may be potentially riskier.”

Investing has become a social affair

Among all the rules that January’s retail-trending tempest helped to break was an age-old norm that’s been trampled on in the era of social media: Don’t boast about money in public.

Indeed, the internet was alight with influencers on apps from Clubhouse to TikTok trying to get a word in edgewise as the chaos unfolded.

Even the billionaire owner of the Dallas Mavericks, Mark Cuban, saw the TikTok investing fever hit close to home.

He told Insider in an email that his 11-year-old son was inspired to start trading after seeing “a bunch of videos on TikTok” but did not specify which personalities created those videos.

Cuban set him up on Robinhood, and they curated a small portfolio of stocks, including a share of Sony, a share of BlackBerry, two shares of AMC, and a few other inexpensive stocks.

When AMC started climbing, Cuban’s son was “fired up,” he said, adding: “Then they dropped. I told him, ‘You just don’t know what happens next.'”

Fortunately for Cuban’s son, he managed to sell his shares and still walk away with a small profit from the experience.

Meanwhile, not all retail investors took their cues from social media’s bevy of personal-finance influencers. Many turned to e-courses for investing insights.

And Wealthsimple, the Canadian digital wealth manager with $8.4 billion in assets under management, reported a 1,100% increase in traffic to its “Investing Master Class”  for the week ending January 29.

The challenge for retail investors now will be twofold: to comb through the digital noise around investing advice to find trustworthy sources, and to fight the impulse to chase ever-higher returns.

According to one poll conducted at the end of January, many retail investors harbor suspicion of the resources available to them online.

Just 12% of survey respondents ages 18 to 44 said they placed a high level of trust in people dispensing advice on TikTok or Facebook, according to a poll of about 500 participants conducted by SurveyMonkey Market Research Solutions.

But 46% of respondents in that same age bracket said they did place “a lot” of trust in more traditional sources, like financial advisors, brokers, and analyst reports.

The markets-research expert Jason Goepfert, the founder of Sundial Capital Research, said he was especially concerned that the myth of quick returns would lure more investors to stake precious cash reserves — like money from their stimulus checks — on risky trades in hopes of building wealth in an already turbulent economy.

“That’s really the sad downside of this, is not just maybe the direct loss that many of them have suffered but just that lasting scar,” Goepfert said. “What is that going to do for their longer-term wealth generation?”