Jeffrey Reid has been earning a 10% premium on his wages working in a grocery store’s meat department in Silver Spring, Maryland, during the coronavirus pandemic. But Reid’s employer, Giant Food, plans to phase out that additional pay at the end of this week.

Reid called it “absolutely absurd” for him and others to return to his normal pay rate just as the U.S. death toll from COVID-19 topped 100,000.

“We don’t have a vaccine. They still don’t know how to treat this thing. We’ve still got a bunch of people walking around asymptomatic,” said Reid, 55. “So why are you ending this hazard pay? We’re still working under hazardous conditions.”

He added, “Last I checked, people are still dying.”

As June approaches, more retailers are ending the temporary pay boosts they offered workers to compensate for the unique dangers posed by the pandemic. Stipends set to expire include a $2-per-hour increase at Amazon and its subsidiary, Whole Foods, a spokesperson for the grocer confirmed Friday.

Giant said in a statement that while it would be eliminating the hazard pay as of Saturday, the chain would offer a one-time bonus of $400 for full-timers and $200 for part-timers as a show of gratitude, to be paid on July 1. “As this is changing and we anticipate our shoppers will return to their new normal, we are now transitioning to our new normal,” a spokesperson for Giant said.

The Kroger grocery chain recently made a similar move, providing bonuses when it canceled a $2-per-hour increase it had been paying during the pandemic.

A spokesperson for Albertsons Companies Inc., which owns several grocery chains, told HuffPost Friday it would be extending its $2-per-hour bonus through June 13. Its grocers include Albertsons, Vons, Safeway and Jewel-Osco.

The United Food and Commercial Workers union, which represents workers at Giant (as well as those at some other grocery chains), maintains that workers deserve extra pay for all hours worked as long as the coronavirus remains a threat. Reid’s union, UFCW Local 400, has launched a petition aimed at keeping the hourly increases in place.

“So long as there is a hazard, there should be hazard pay. And the hazard is still very real right now,” the union said.

The pandemic has made work vastly more dangerous for many employed by businesses deemed essential. From hospitals to meatpacking plants to grocery stores, many workers around the country have been frustrated by a lack of hazard pay or the loss of temporary but modest increases.

Many of the pay boosts that workers have received came after employees and groups like the UFCW put public pressure on companies to provide something extra. Many employers have been reluctant to call the premiums “hazard pay,” a term that would acknowledge the dangers workers are facing. Kroger, for instance, dubbed it “hero pay,” and Giant coined the term “appreciation pay.”

No federal law requires private-sector employers to provide workers with hazard pay under any circumstances. Democrats in Congress, along with Republican Sen. Mitt Romney of Utah, have discussed proposing a federally funded hazard pay program to put additional money in the pockets of nurses, bus drivers, retail cashiers and others who’ve been working through the pandemic. 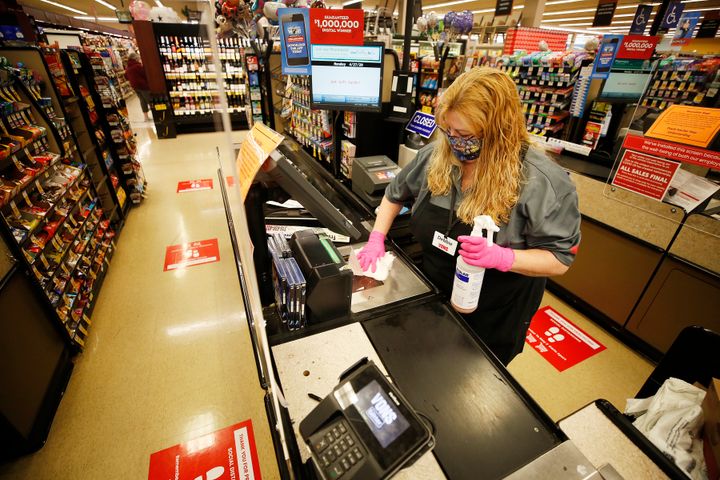 The Democratic plan would provide an extra $13 per hour for most hours worked in 2020, to be capped at $25,000 for most workers. Romney’s plan would provide an additional $12 per hour, but for a much shorter window. Neither plan has gained much GOP support, even though Republicans got on board with giving unemployed workers an extra $600 per week from the federal government.

Some meatpacking plants have offered modest bonuses contingent on perfect attendance during a week, even though many of the workforces have been devastated by the virus, with more than 40 workers dead and thousands believed to be infected, according to the UFCW.

The lack of any federal plan has also led to pay disparities within industries, and even within companies. While Giant is ending its additional pay, the chain Stop & Shop has said it will extend its 10% pay increase through the July 4 holiday. Like Giant, Stop & Shop is a subsidiary of the Netherlands-based multinational Ahold Delhaize.

Reid, the Giant employee in Maryland, said the extra pay has not been sufficient for the dangers stemming from the pandemic, but that it has been meaningful.

“It’s a small token of appreciation. At least the company is recognizing the hazardous conditions we’re working under,” he said. “But under no stretch of the imagination is that enough. Especially if you take into account that the sales have been through the roof in these stores.”

Reid said the pandemic has made grocery work not only more dangerous but more difficult. Employees are having to remind shoppers of the rules on mask-wearing and social-distancing inside stores. Surfaces must constantly be cleaned. Workers wear hot masks throughout the day. And shortages of certain products like toilet paper and hand sanitizer continue to upset customers.

The time will come for the temporary hazard pay to end, Reid said ― but the time is definitely not now.

“This is a real-life health crisis,” he said. “By no stretch of the imagination are we out of the woods on this thing.”