Donte Martin authored an illuminating as-told-to essay for The Washington Post last week about working in a grocery store during the pandemic.

Martin, a front-end manager at a Giant in Silver Spring, Maryland, explained how the coronavirus has rendered customers he’s always loved a health threat. Many shoppers ignore the policies meant to protect workers like Martin and even get angry over the requirement that they wear face coverings in the store. He said a supervisor even told him not to wear a mask at one point, saying it made him look like “a terrorist.”

Martin’s piece didn’t mention that he is a member of a union, the United Food and Commercial Workers Local 400. But if not for his union representation, he almost certainly would not have shared his experience with the world.

“If I didn’t have a union, I probably wouldn’t have spoken up,” Martin told HuffPost.

The pandemic has created an unprecedented workplace safety crisis, making millions of jobs vastly more dangerous. It’s critical that workers like Martin can share their stories with the public and with regulators like the Occupational Safety and Health Administration. If they can’t speak up about hazards, more workers will die needlessly from a virus that’s already claimed roughly 100,000 lives in America as of this writing.

But what’s true in normal times is especially true now: Workers who have weak job protections are fearful to speak up, lest they get punished or even fired. The vast majority of Americans work “at will” ― meaning their employers can get rid of them for almost any reason, as long as it isn’t discriminatory.

And while workers have a nominal right to refuse dangerous work, the law is weak and puts the burden of proof on employees.

Martin has much stronger job protections. As a union member, he is entitled to “﻿just cause,” meaning Giant would need a good reason to sack him. Unless there was gross misconduct, employers typically have to administer progressive discipline before firing a union worker, documenting a pattern of poor performance or attendance.

And if Martin were punished for what he said in The Washington Post, his union’s lawyers would almost certainly file a grievance on his behalf, fighting to have him reinstated and any discipline in his record expunged.

Of course, those are the same reasons many employers and conservative politicians despise unions: They make it harder to get rid of workers, even though most collective bargaining agreements still allow layoffs for legitimate business reasons. But it’s hard to deny that there’s a public benefit to workers having the agency to speak out in a pandemic. After all, Martin wants to protect not just himself and his colleagues, but his customers, too.

Terri Gerstein, a labor lawyer and fellow at the Harvard Law School Labor and Worklife Program, said safeguards like just cause are more important than ever.

“Protection against unlawful firings is absolutely critical right now,” Gerstein said. “Workers need to be able to speak up without threat of losing their jobs. That’s important for worker safety and for public health.”

Any journalist who spends time interviewing different workers spots a general trend: Union members are often comfortable putting their names on the record criticizing an employer, while nonunion workers frequently request anonymity. That’s not true in every case, of course, but the trend generally holds true, pandemic or not.

HuffPost’s own coronavirus coverage bears out the dichotomy. We recently spoke to a dozen Starbucks employees about their safety concerns as the nonunion chain reopens most of its stores. Only one was comfortable using her full name ― and that was because she had just quit. 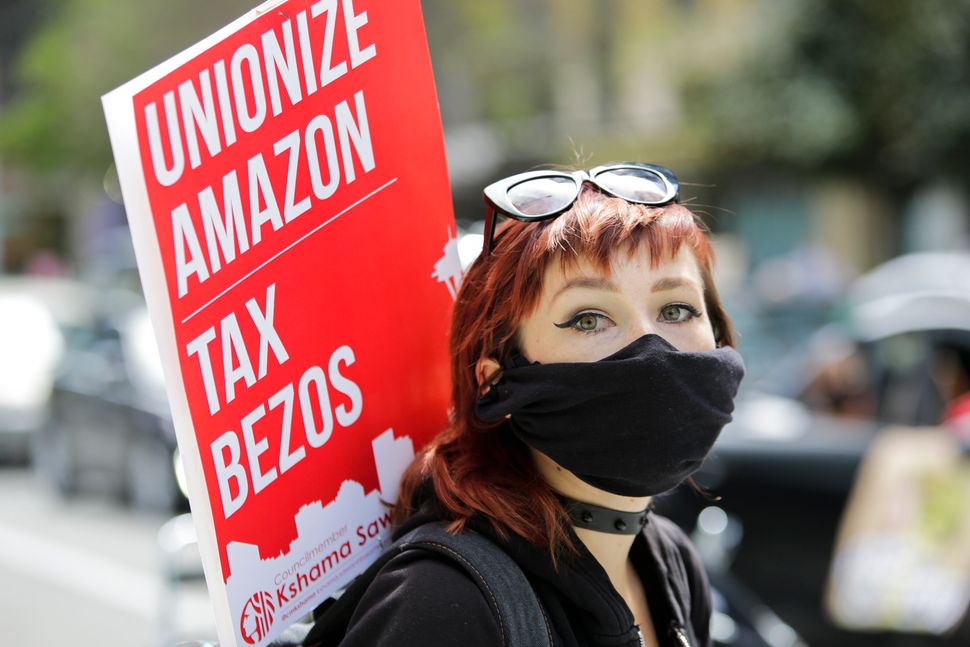 Meanwhile, two stories we ran on Wednesday included several workers discussing job conditions on the record. In one, unionized corrections officers spoke about how overworked and endangered they feel during the pandemic. In the other, unionized employees of Kroger blasted the grocer for ending their modest hazard pay.

For workers willing to speak up, a union affords not only contractual protections but legal and organizational firepower.

As HuffPost has reported, doctors and nurses say they have been fired or retaliated against for speaking out during the pandemic. In many cases, a union has fought for their reinstatement. The union National Nurses United has been one of the most vocal groups since the start of the crisis, with members readily critiquing the response of hospitals and the government.

If not for the United Food and Commercial Workers’ density in the meatpacking industry, the public would probably know a good deal less about the ongoing disaster affecting its vulnerable and largely immigrant workforce. One of the union’s locals has been so outspoken about hazards that the food processing giant JBS hit it with a cease-and-desist letter citing negative media attention.

Jonathan Williams, a spokesperson for UFCW Local 400, said the union was prepared for Martin’s essay in The Washington Post. Union staff prepped Martin’s shop steward in case there was any blowback from Giant management.

Williams said the union has filed two grievances on behalf of members who spoke out in the press during the pandemic ― one at Safeway and another at Kroger. According to Williams, the workers were not explicitly punished but were warned about speaking to the media without permission. The union holds the position that speaking to the press is protected concerted activity under labor law.

He said the situation put the difference between union and non-union workplaces in “stark relief”: “These folks might have been summarily fired immediately, or faced discipline of some kind, and none of that is happening. Right now they’re just going through the grievance process, and they have the full backing of the union.”

Plenty of workers without union protection have also spoken out with their names on the record about the hazards they face and their employers’ lax safety standards. But even many of those workers have labor organizations backing them up.

The most vocal fast-food workers tend to be affiliated with the Fight for $15, which is not a union but is funded by the Service Employees International Union. Athena, a coalition of dozens of grassroots groups, is organizing many outspoken Amazon warehouse workers. And nonunion worker centers have helped publicize dangerous working conditions in other industries.

Most workers are supposed to be legally protected when they raise alarms about work hazards. The Occupational Safety and Health Act includes a “right to refuse dangerous work” provision for when whistleblowers face serious harm or death. But it can be a high bar for fired workers to clear, with several factors that need to be met, and relies on an agency that is underfunded and outgunned by big employers. Like some other federal labor laws, you probably wouldn’t want to lean on this one unless you had no other choice.

Moshe Marvit, a labor lawyer and fellow at the Century Foundation think tank, said the law’s shortcomings are so severe it would be irresponsible to make workers think it will protect them. He says a much better solution would be to expand union-style just-cause protections to more workers. That way, employers couldn’t so easily find a pretext for firing someone who filed a complaint with OSHA or spoke out in the press.

“You can’t have a safe workplace unless you have free speech,” Marvit said.

The idea of giving nonunion workers just-cause protections has caught on in some progressive circles. Erstwhile Democratic presidential candidate Sen. Bernie Sanders (I-Vt.) placed it at the center of his labor platform. A proposal in New York City would grant the protections specifically to fast-food workers, who say they’ve been subject to arbitrary firings.

Even if the concept hasn’t caught much mainstream traction yet, Marvit thinks the pandemic could forever change the way people view job security, especially as unemployment numbers continue to climb and workers cling desperately to their paychecks.

“As jobs become more scarce and people get fired for speaking up, I think there is going to be much more of a public outcry over it,” he said. “And you never know what kinds of coalitions and demands people will start making.”

You can now buy moon dust from Nasa's Apollo 11 mission for $400,000 but it hides a disgusting secret