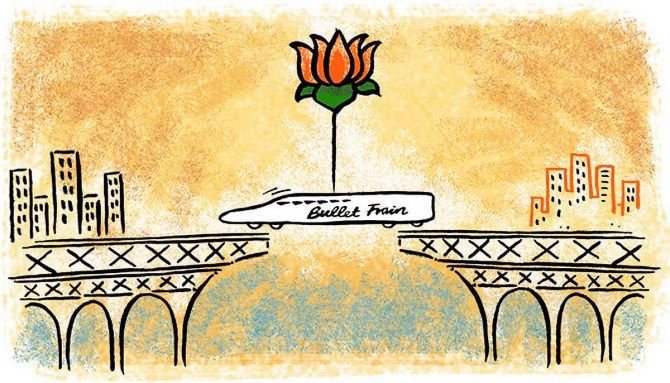 The Indian Railways, in a major development, is set to have private players for constructing and operating its planned seven new bullet train projects.

“All the seven new bullet train routes will be open for private players.

“We will be doing it on a public private-partnership model,” said V K Yadav, chairman and chief executive officer of the Railway Board.

These routes will be in addition to the already planned Mumbai-Ahmedabad high-speed rail project.

This comes when the Railways is trying to attract private players for its Rs 1-trillion station redevelopment and Rs 30,000 crore private train project.

User fees to be charged soon

Yadav said once the stations were in place, user fees would be charged from passengers using at least 15 per cent of the 7,000 railway stations in the country.

They will be modernised in some form or the other.

The move is likely to raise train fares at these stations.

On the other hand, for private trains, the operators will have the freedom to set rates, said Amitabh Kant, chief executive officer of the NITI Aayog.

For these trains, the fixed haulage charges that railways will be getting will be indexed to the wholesale price index (WPI).

Private train bids are invited on the basis of 12 clusters covering 109 routes, on which 151 trains will be operated.

The last date of application for private investors is October 7.

The Indian Railway Station Redevelopment Corporation  has come up with a request for quotation for 10 stations.

Among the major stations include the Chhatrapati Shivaji Maharaj Terminal (CSMT) in Mumbai and New Delhi Railway Station.

The CSMT is expected to see investments of around Rs 1,642 crore and NDLS around Rs 4,925 crore.

The last date for submitting bids for New Delhi is November 6 and for Mumbai October 22.

Built in 1887, the CSMT was declared a UNESCO World Heritage Site in 2004 and has footfall of over a million a day during normal operations.