The job of harvesting cauliflowers could one day be in the mechanical hands of robots thanks to a collaboration between scientists and the French canned vegetable producer Bonduelle.

Fieldwork Robotics, the team behind the world’s first raspberry-picking robot, is designing a machine in a three-year collaboration launched on Monday. 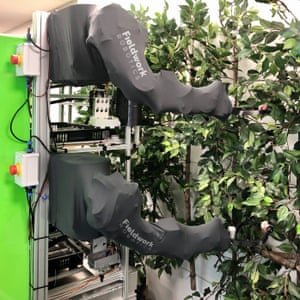 An early prototype already exists, developed by Fieldwork’s co-founder Dr Martin Stoelen, lecturer in robotics at the University of Plymouth and associate professor at the Western Norway University of Applied Science. It has a gripper and a cutter that can neatly slice off a cauliflower head.

“It works in a lab environment, where we put a lot of cauliflower heads in a row,” said Rui Andrês, Fieldwork’s chief executive. The robot is guided by sensors and 3D cameras and uses machine learning, a form of artificial intelligence.

A current favourite of foodies who have rescued it from its traditional insipid cheese sauce and are using it as an alternative to rice and pizza bases, but the vegetables do pose a challenge for robot designers.

Supermarkets and most consumers want white cauliflower, Andrês said. Cauliflower turns yellow in the sun, so self-blanching varieties have been developed with leaves that curl up over the head to shield it from sunlight. However, this makes it much harder for a robot to determine the ripeness.

Bonduelle will provide the necessary know-how about the vegetables and harvesting conditions, as well as access to fields.

Fieldwork Robotics, a spinout from the University of Plymouth, will collect data and feed it into computer algorithms that will power the robotic arms. Field trials are expected to start in early 2022. 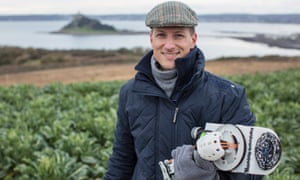 Stoelen originally developed the robot system in a project funded by the European Regional Development Fund and Cornwall council. Fieldwork envisages a modular robot system that can be adapted for different fruit and vegetables (it has also been tested on tomatoes).

Britain’s departure from the EU has led to a decline in the number of seasonal workers coming to the UK to pick fruit and vegetables, and some growers looking to plug labour shortages have already expressed interest in the raspberry-picking robot.

Fieldwork raised £298,000 in January from its backers to scale up the technology, and has also been supported by a £547,250 Innovate UK grant. It is looking to raise a further £500,000 from existing and new investors.

Fieldworks has worked with Germany’s Bosch to improve the software and design of the robot arms. The robot is about to get two more arms, and should be able to pick a raspberry in 2.5 seconds next year (currently 2.8 seconds) while humans take two seconds to pick a raspberry on average. However, the robot will be able to work right through the night.

Planned field trials in the spring could not go ahead because of the Covid-19 pandemic, but the robot will be back for testing in greenhouses next month. Fieldwork hopes to have a raspberry-picking prototype ready for manufacture by next summer.