Sam Riddle, an original “Boss Radio” DJ on KHJ Los Angeles who also produced and narrated Star Search and many other TV shows, died Monday at his home in Palm Desert, CA. He was 85. Riddle’s family said had been battling Lewy body dementia.

Riddle was one of KHJ’s original Boss Jocks during the mid-1960s and went on to host local TV shows including Hollywood A Go Go, 9th Street West, Boss City and Sounds of Now. He also co-hosted Get It Together with Mama Cass and Sam Riddle at the turn of the 1970s. The 2021 HBO documentary Tina includes Riddle announcing the first big TV appearance of Ike and Tina Turner. 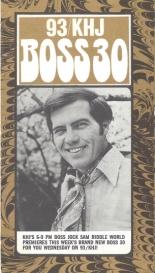 Born on December 12, 1937 in Fort Worth, Texas, Riddle served in the Air Force reserves during the Vietnam War. He got his radio start with DJ gigs in Texas, Arizona and San Diego before landing at KRLA/Los Angeles in 1960. He moved to L.A.’s KFWB in 1963 and two years later was among the original fast-talking Boss Jocks on the popular and influential “Boss Radio” format on KHJ. He worked the 9-to-midnight shift until 1970 and moved to KDAY and KROQ-FM before returning to KHJ in 1974.

By the mid-1970s, Riddle had left radio and was focused on producing for television. He worked on the series Almost Anything Goes and Hollywood Teen and announced for The Wizard of Odds before working on the Ed McMahon-hosted prototype competition show Star Search. Riddle produced the show and narrated from its 1983 launch until 1994. He would go on to serve in producer or EP roles for TV specials and such syndicated series as Triple Threat, Out of the Blue, House of Pop and Destination Stardom.

In the mid-2000s, Riddle produced The Ultimate Poker Challenge and other card tournaments. He also managed acts for Sony/BMG and EMI Latin, having worked on multiple Spanish-language series and specials for Telemundo and Univision.

Riddle is survived by his wife of 54 years, Adrienne; children Scott and Courtney; and grandchildren Miracle and Garin.