Cosmo Feilding Mellen was involved in the world of psychedelics long before the compounds started to become mainstream.

Feilding Mellen is the cofounder and CEO of UK-based psychedelics company Beckley Psytech, but his family — and his mother Amanda Feilding, in particular — has been involved in the scientific studies around psychedelics since 1998. That's the year Feilding started the Beckley Foundation, a non-profit focused on drug policy reform and scientific research into psychoactive substances.

Feilding, dubbed the Countess of Cannabis, has been a long-time advocate for psychedelics-based therapies and is a leading advocate for reform for medical cannabis in Europe. She is currently chair of Beckley Psytech's Scientific Advisory Board.

Before starting Beckley Psytech, Feilding Mellen was deeply involved in the Beckley Foundation, which has partnered in joint research collaborations with institutions like Imperial College London and Johns Hopkins in clinical trials of psychedelic compounds over the past 20 years.

He's directed documentaries on drug policy and the history of psychedelics and worked as the managing director of the UK for Canopy Growth, a Canadian cannabis giant. During that time, Canopy acquired Beckley Canopy Therapeutics, a company founded in partnership with Canopy Growth and the Beckley Foundation to develop cannabis-based medications.

Beckley Psytech was formed in 2019 when the non-profit foundation began to look for business opportunities that would be able to increase the scale and ambition of the work the foundation was involved in. The foundation exists separately from the for-profit company.

The for-profit venture just closed an $18.6 million funding round, backed by investment firms Noetic Psychedelic Fund and Bail Capital. Canadian businessman Greg Bailey, entrepreneur Jim Mellon, and Innocent Drinks cofounder Richard Reed also invested in this round, as well as a previous $3.8 million fund which closed in May 2020.

Beckley Psytech plans to soon begin clinical trials of 5-MeO-DMT, a psychedelic agent found naturally in the Sonoran Desert toad. Feilding Mellen said that the company is looking into other treatments as well.

"We're setting up Beckley Psytech to be a platform where multiple drug development programs are running in parallel with different compounds, targeting different disease areas," he said in an interview.

Beckley Psytech plans to look into three groups of compounds.

The first will focused on psychedelics that are "well defined" and researched already, like LSD, psilocybin, and MDMA, he said.

The second generation of products will be those that have a large body of anecdotal evidence, but haven't been researched very much. That includes the Southern Desert Toad psychedelic agent 5-MeO-DMT.

The third generation will be focused on unique compounds that Beckley hopes to develop and patent.  These synthetic compounds would offer "clinical and safety advantages over what's already out there," Feilding Mellen said.

He said the company aims to have approved psychedelics medications come on the market by 2025, if not before. ATAI Life Sciences and Compass Pathways, two of the biggest psychedelics companies, have offered similar timelines.

Take a look at Beckley Psytech's pitch deck below: 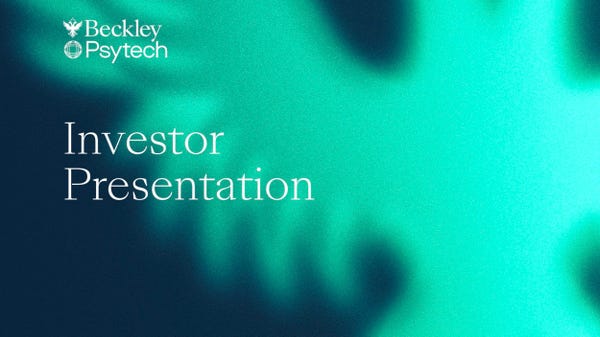 The round was backed by investment firms Noetic Psychedelic Fund and Bail Capital and other individuals. 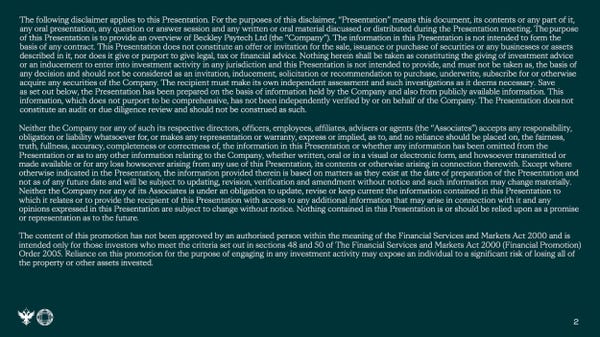 The company says psychedelics can help people with forms of depression that are hard to treat. Here's an account from a patient who participated in a clinical trial run in conjunction with the Beckley Foundation and Imperial College London 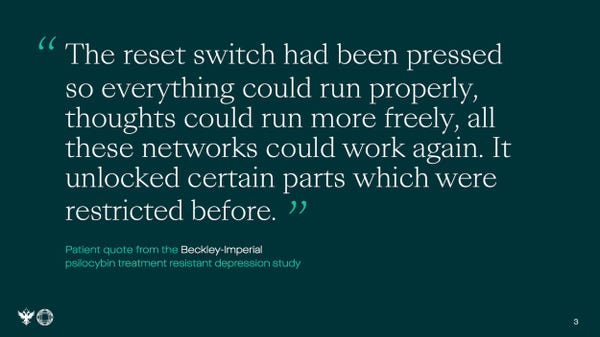 Here's a look at the company's mission statement 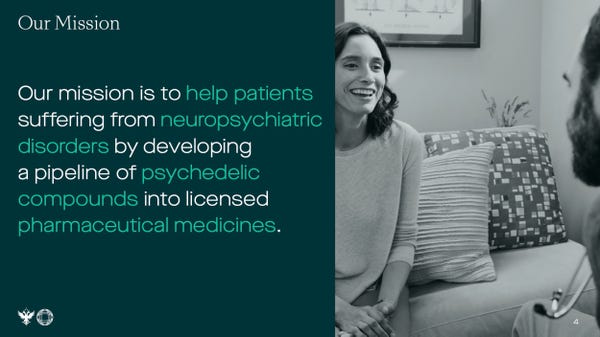 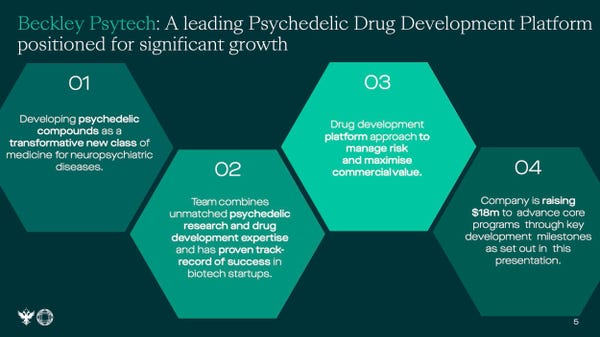 Beckley Psytech is borne out of the Beckley Foundation, which has pioneered and partnered with many clinical trials surrounding psychedelics, and Beckley Canopy, which was focused on developing cannabis-based medications 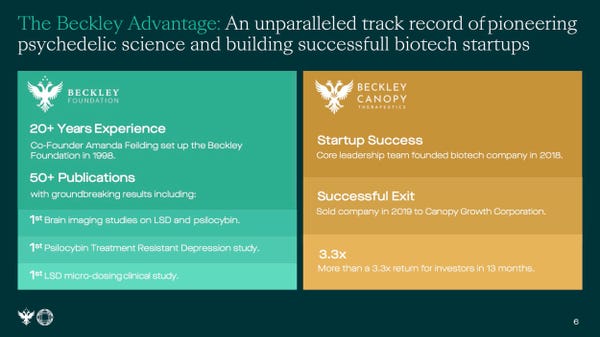 The first part of the deck outlines the market opportunities for psychedelic medications. 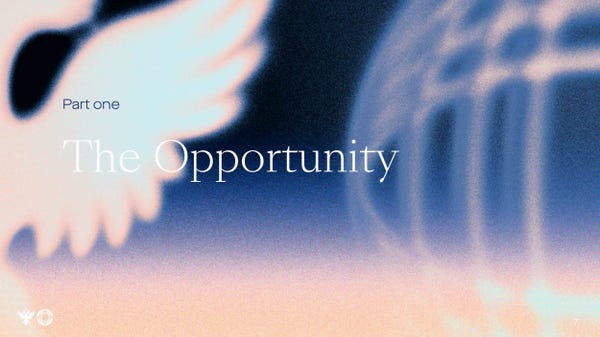 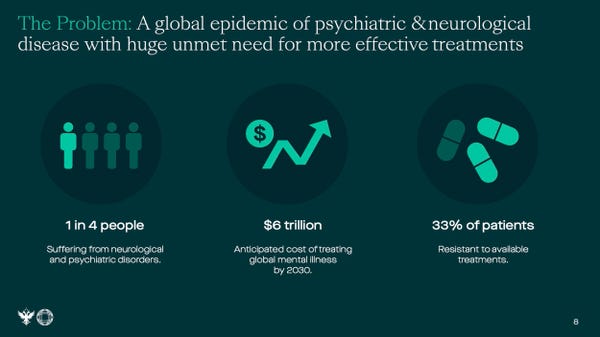 "What we're trying to do is not reinvent the wheel here," Feilding Mellen said, pointing to other cannabis or psychedelic based medications like GW Pharma's Epidiolex and J&J's Spravato. 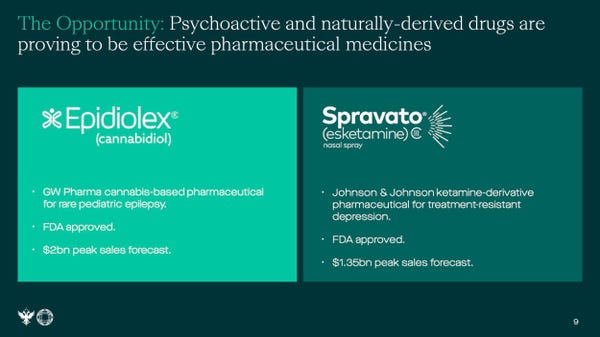 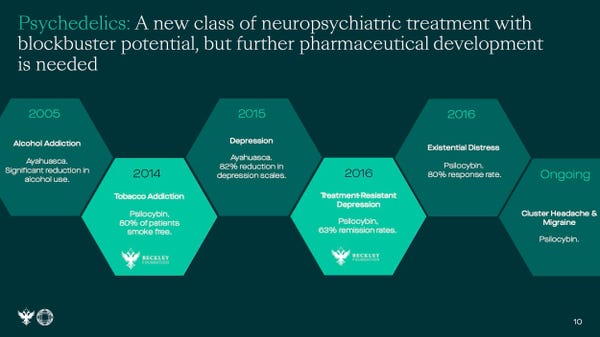 "Every way you look at it, psychedelics are a huge and growing topic of interest and investment [right now]," Feilding Mellen said. 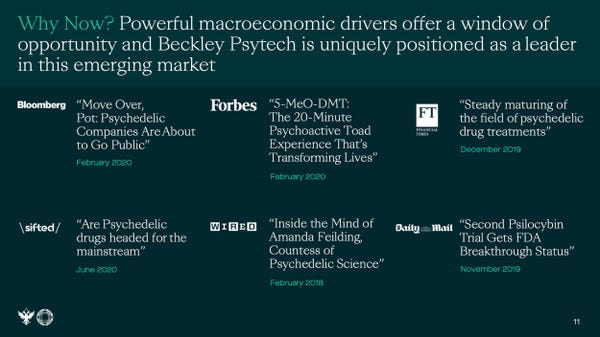 The second part of the deck focuses on the company's strategy and the people leading it. 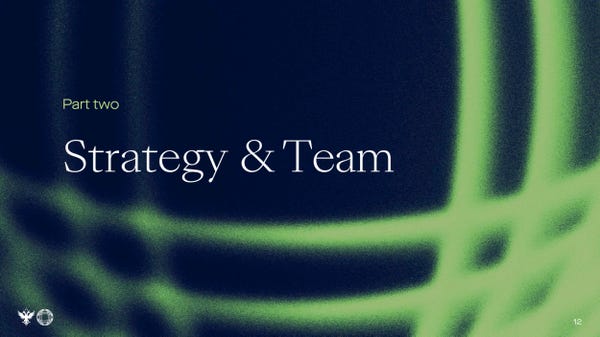 The deck lays out several types of compounds that Beckley plans to research. 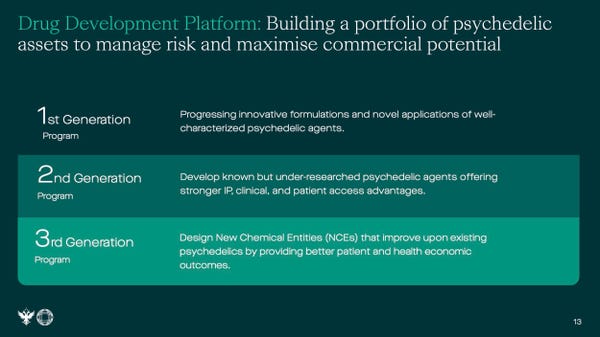 Feilding Mellen told Business Insider that the company's current programs are built from the ground up and generated internally.

"But sa we progress, we will be looking at partnerships and, uh, and potential licensing opportunities. So, so that would be a kind of a next evolution for the company," he said.

Many of the company's executives hail from Beckley Canopy Therapeutics and Johnson & Johnson, which developed the medication Spravato, a medication that's based on ketamine. 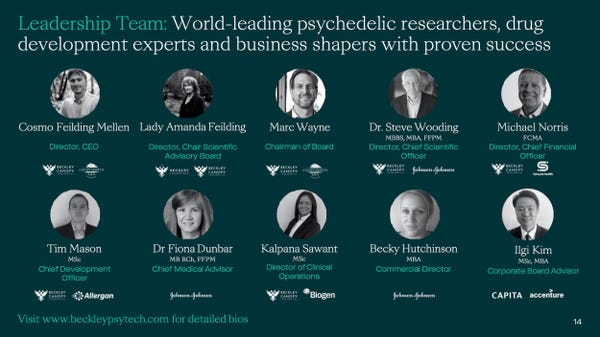 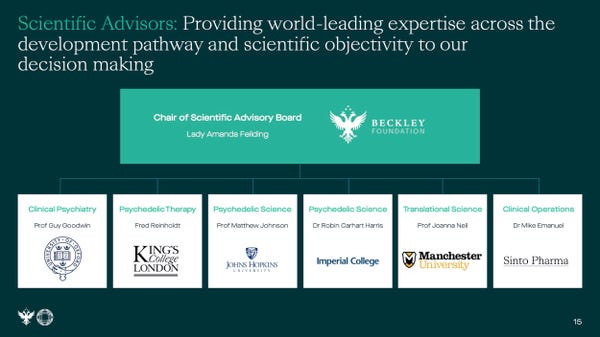 The company also touts its ties to the Beckley Foundation and the nonprofit's research relationships. 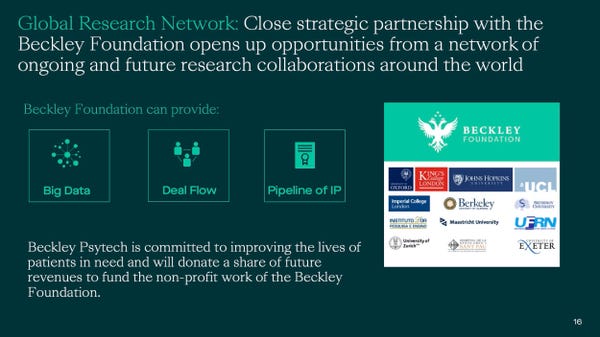 The third section of the deck looks at the company's research capabilities and competitive positioning in the space. 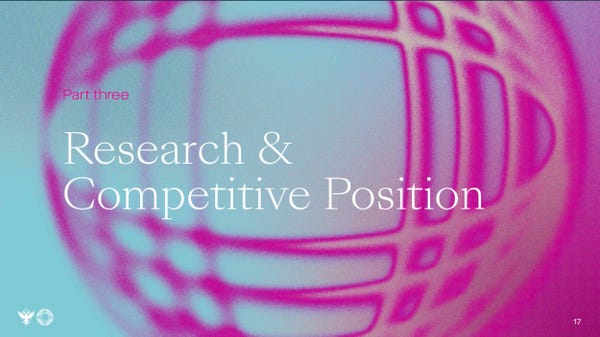 "We are not trying to just do what everyone else is doing," Feilding Mellen said. "We are trying to develop programs and drugs that offer something different to what other people are looking at." 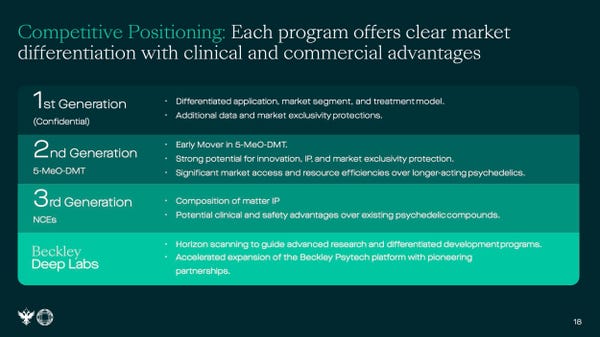 A deeper look at 5-MeO-DMT, which is part of the company's "second generation" psychedelic products 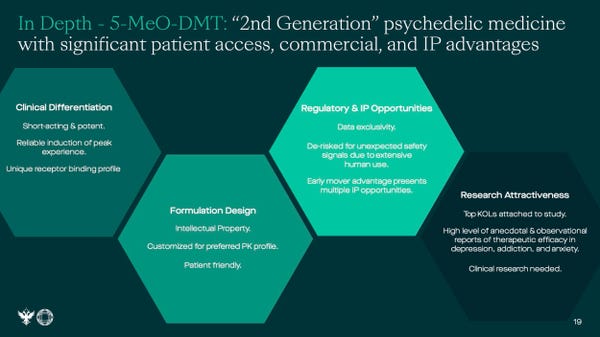 Deep Labs is looking at how AI and machine learning can be used to accelerate research and improve outcomes for patients. 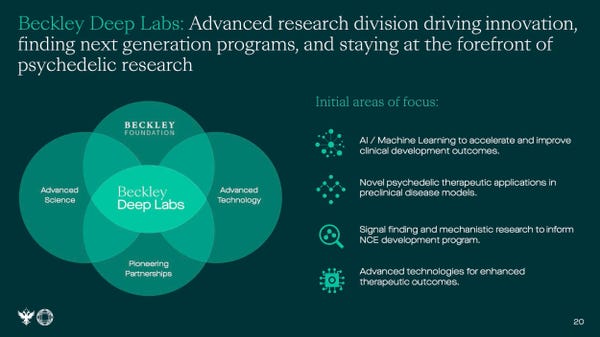 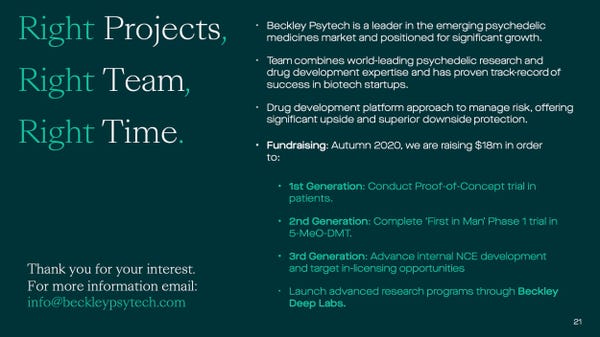 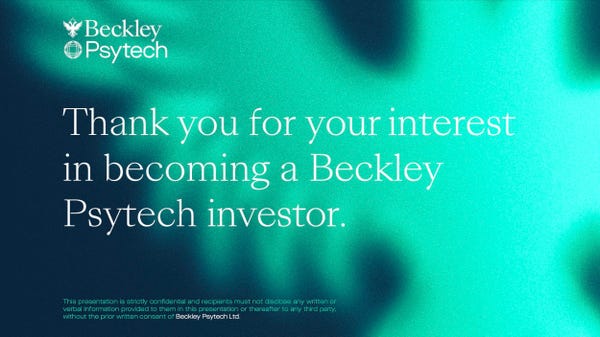