Dow component Walmart Inc. (WMT) and other big box department stores made headlines in the first quarter, with their stock prices zooming higher due to their commanding market share at a time that retail competitors were struggling to survive. These stocks have held their ground into mid-May, but buying power has failed to keep up with price action, indicating that smart money is now taking profits and/or building new short sale positions.

The accumulation deficit also tells us that short covering has powered the majority of the group's 2020 upside rather than serious investors looking for long-term returns. That rocket fuel is no longer in play, and these stocks are now riding the slow ascent of broad benchmarks, which could stall at any time. The loss of that trading floor could expose these issues to rapid declines, trapping late-to-the-party shareholders. 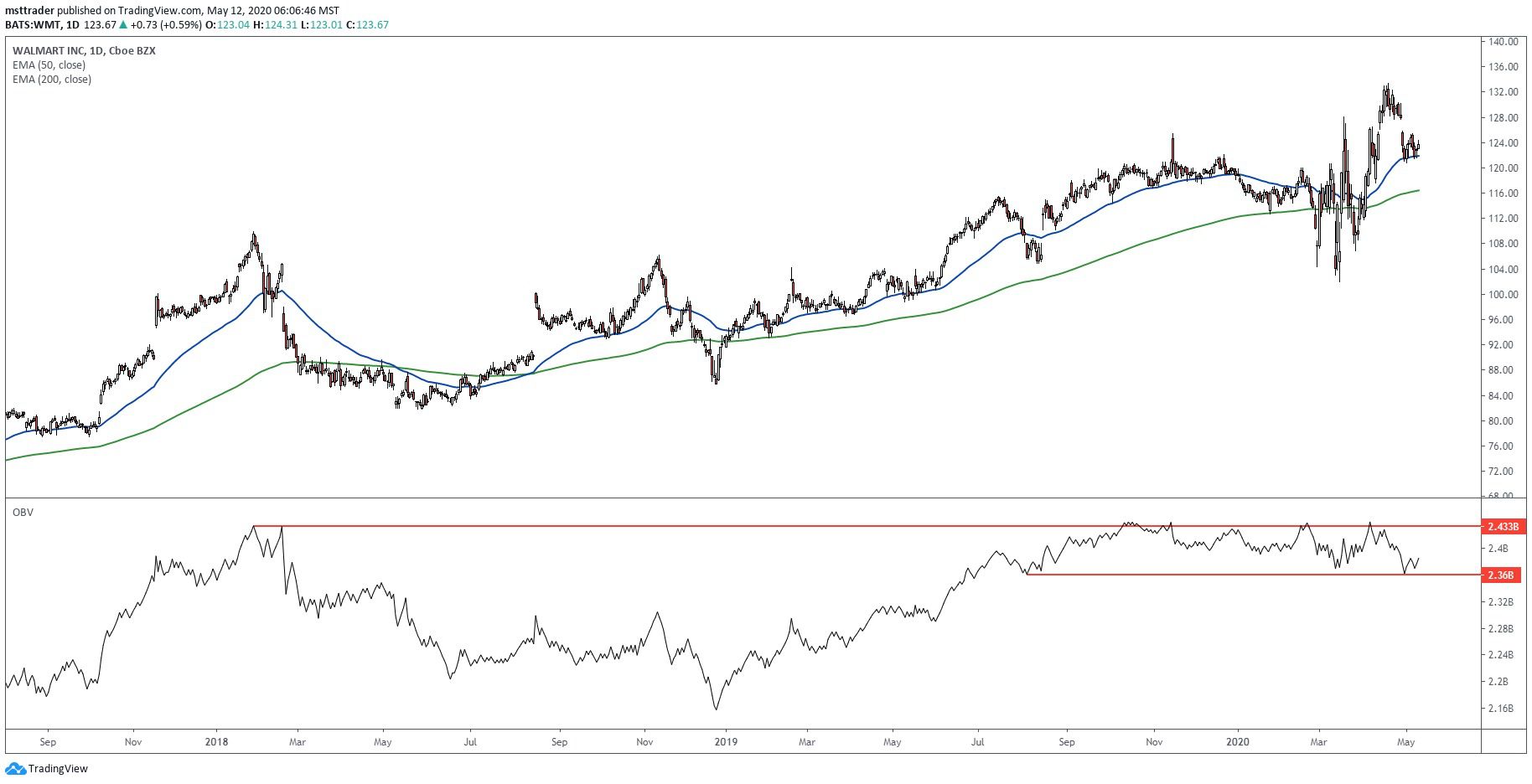 Walmart stock topped out at $110 in January 2018 and pulled back into the low $80s in May. Price action held within those boundaries into a June 2019 breakout that made limited progress, topping out at $125 in November. The stock sold off to a nine-month low near $100 in March and turned sharply higher, carving two rally waves into April 20's all-time high at $133.38, ahead of a pullback that has settled on the 50-day exponential moving average (EMA).

The on-balance volume (OBV) accumulation-distribution indicator tells a different story than price action, reversing in October 2019 after reaching resistance at the January 2018 high. It tested that level in February, dropped to a seven-month low, and reversed once again at resistance on April 6, two weeks before the rally topped out. OBV has now dropped to the lowest low since August 2019, when the stock was trading nearly 20 points lower. 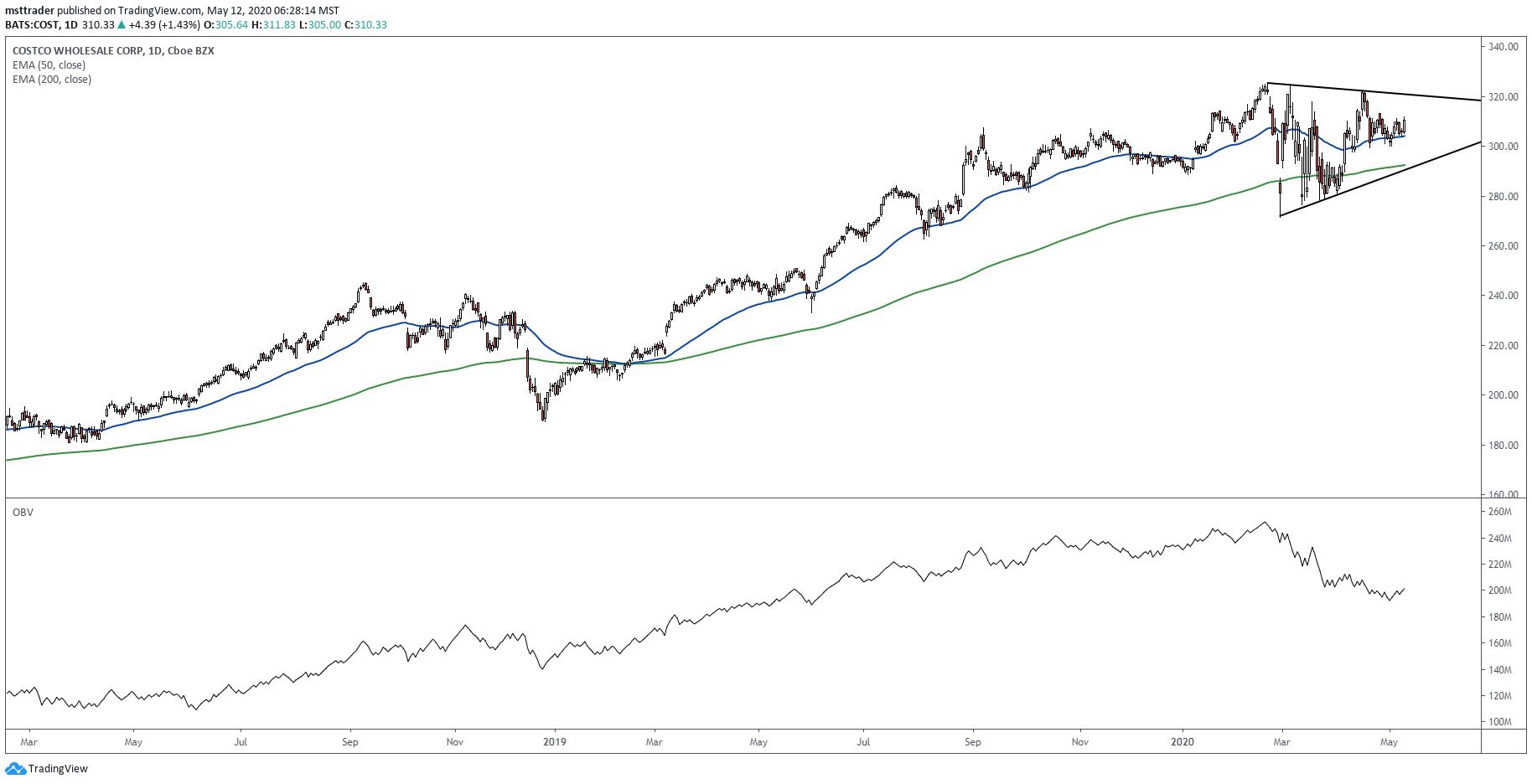 Costco Wholesale Corporation (COST) shares topped out at $245 in September 2018 and sold off to $189 in the fourth quarter. A 2019 recovery wave reached the prior high in April, ahead of a June breakout that posted impressive gains into February 2020's all-time high at $325.26. The stock then fell more than 50 points in just five sessions, finding support at a seven-month low above $270. The subsequent bounce topped out four days later within a point of the prior high, yielding volatile two-sided action that has now settled about 15 points below resistance.

OBV hit a new high one day before the stock posted an all-time high in February and rolled into a persistent distribution phase that has carved lower highs and lower lows into mid-May, despite buoyant price action and a bullish-looking triangle pattern. In turn, this bearish divergence suggests that smart money has been using the repeated buying spikes to dump long positions or to open new short sales. 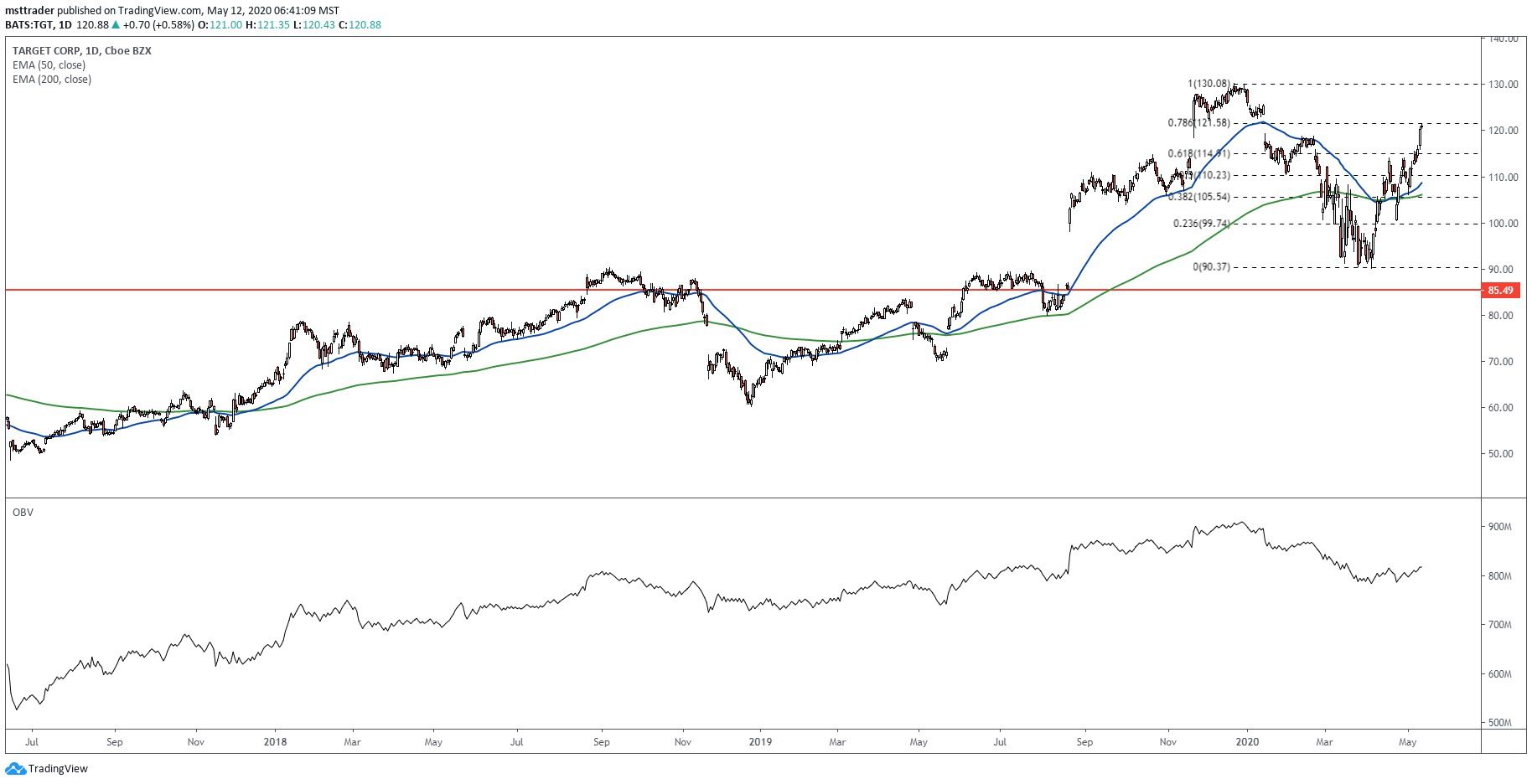 Target Corporation (TGT) stock topped out in the mid-$80s in 2015, held down by a well-publicized data breach that exposed millions of customer accounts. Rally attempts in 2016 and 2018 failed, while the uptick into July 2019 completed a multi-year cup and handle breakout that posted an-all time high at $130.24 during the last week of December. The stock then sold off in a relatively simple corrective pattern, bottoming out near $90 at the start of April.

Price action has recouped more than three-quarters of the corrective losses in the past six weeks, but OBV has barely budged, setting off a bearish divergence. Distribution started at the same time the stock topped out, indicating that shareholders were taking profits at a steady pace throughout the first quarter. Ominously, the uptick has now reached resistance at the .786 Fibonacci sell-off retracement level, setting up ideal conditions for a reversal and steep pullback.

Big box retailers are trading near rally highs, but steady distribution under the surface suggests that smart money has been selling into these upticks.

Disclosure: The author held no positions in the aforementioned securities at the time of publication.