The group began to outperform the broader market only with the onset of the pandemic in March 2020 while earlier it was largely keeping pace with the Sensex. 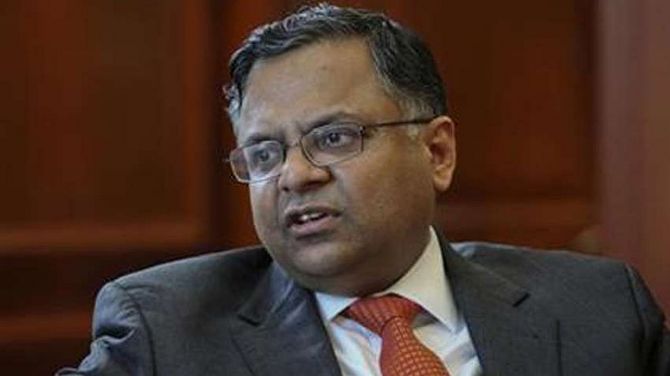 The listed companies in Tata Group have outperformed the broader market by a big margin in the past five years under the chairmanship of N Chandrasekaran.

The companies’ combined market capitalisation is up 188 per cent since February 21, 2017, when Chandrasekaran took charge as Tata Sons head, against a 110 per cent rise in the BSE Sensex during the period. (See the charts.)

While Tata Consultancy Services (TCS) has been the single-biggest contributor to the rise in group market cap, smaller firms such as Tata Teleservices (Maharashtra), Tata Elxsi, Titan Company, and Tata Consumer have been the top performers in the period.

In all, 12 of the 18 Tata firms outperformed the broader market during the period.

Titan, the jewellery and watch-maker and the fourth-biggest in the group in terms of market cap in February 2017 — behind TCS, Tata Motors, and Tata Steel — has moved to second position with Rs 2.35 trillion from around Rs 40,000 crore then.

Tata Motors, Tata Communications, and Indian Hotels remain laggards despite a big surge in their market cap in the past 18 months.

The market cap of TCS, which has historically accounted for more than half the group market cap, has tripled during the period from Rs 4.86 trillion in February 2017 to Rs 14.49 trillion on Tuesday.

The other group companies’ combined market cap is up 174 per cent during the period from Rs 3.6 trillion to Rs 9.87 trillion on Tuesday.

Gains after the pandemic

The group began to outperform the broader market only with the onset of the pandemic in March 2020 while earlier it was largely keeping pace with the Sensex.

This surge in market cap has been pivoted on a rise in profitability at group level.

This incremental growth in group earnings largely came from Tata Steel and TCS, while Tata Motors turned loss-making during the period.

Merger and acquisition has been central to the Tata group growth strategy under the leadership of Chandrasekaran.

One of his first tasks was to get rid of Tata Teleservices cellular phone business, which lost around Rs 60,000 crore in paying back bank loans, apart from paying aggregate gross revenue.

The Tatas sold the mobile phone business to Bharti Airtel while retaining its debt and other liabilities.

On Wednesday, Tata Teleservices Maharashtra, a listed subsidiary of Tata Teleservices, said it had taken the option to offer 9.5 per cent equity to the Government of India as part of a relief package announced by the Centre for the telecom sector.

In one of the best acquisitions to date, Tata Steel acquired Bhushan Steel in May 2018 for Rs 35,200 crore after the company defaulted on bank loans and was sent for insolvency.

Tata Steel has managed to turn around the company, which has been renamed Tata Steel BSL Ltd.

Tata Steel tried its best to sell its European business to ThyssenKrupp in the last two years but failed to close the deal after objections from several quarters.

Corporate watchers said when Chandrasekaran took over, he had to manage five priorities, namely corporate governance in Tata Sons and individual firms, enhance the brand image of Tata Sons and affiliate companies, create a strategic road map for individual companies, develop the environment, social and governance (ESG) strategy, and manage and create leaders.

The success of a strategy is best seen when there are disruptions.

While the steel industry shrank during the pandemic, where 30 per cent of the capacity was not utilised, Tata Steel increased its revenues by 9 per cent in 2020-21, and the expenditures were reduced by 12 per cent.

Even the automobile industry shrank, but in adverse circumstances, Tata Motors increased its revenues by 5 per cent.

“These results were achieved due to the resilient strategies for each business Chandrasekaran had implemented,” said Himanshu Rai, director of the Indian Institute of Management, Indore.

The acquisition of Air India in October last year for an enterprise value of Rs 18,000 crore from the Government of India is another big-ticket buy.

The group owns two airlines — Tata SIA Airlines and AirAsia India — and the acquisition of Air India and its subsidiary, Air India Express, will increase its combined market share to over 25 per cent of the airline industry.

Last year, Chandra started his acquisition spree in the digital domain in his drive to launch a Super App, which will sell stuff from salt to airline tickets to customers directly.

In May, Tata Sons acquired BigBasket with media reports estimating the valuation of the company at Rs 9,500 crore.

The acquisition will put Tata Sons in direct competition with Amazon, Flipkart, and Reliance Retail.

“Chandrasekaran’s legacy would be creating an ambidextrous organisation,” said Rai.