Halloween is the spookiest night of the year.

It's also a boon to the retail industry — even during a pandemic. According to the National Retail Federation, Halloween spending in the US is projected to reach $8 billion in 2020, with 58% of people planning on celebrating.

And, with more people indoors and looking for a little cheer during a tough year, pet costumes are "flying off the shelves."

The Halloween fever isn't contained to the US, either. In fact, people around the world celebrate the holiday in many different ways.

But where did all these strange practices come from? Turns out, a lot of these customs date back centuries. The holiday has changed over time, transforming from an ancient tradition to the flashy fright fest we know and love today.

Let's take a look at the origins of some of our favorite Halloween traditions.

The word 'Halloween' was first popularized in a poem. 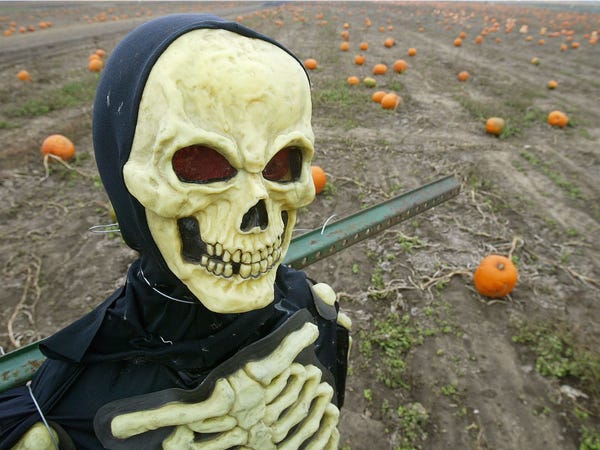 Scottish poet Robert Burns helped to popularize the word "Halloween" with his 1785 poem of the same name.

So where does the name itself come from? According to the Online Etymology Dictionary, it's actually two words smushed together. "Hallow" — or holy person — refers to the saints celebrated on All Saints' Day, which is November 1. The "een" part of the word is a contraction of "eve" — or evening before.

So basically, Halloween is just an old-fashioned way of saying "the night before All Saints' Day" — also called Hallowmas or All Hallows' Day.

This comes from the fact November 1 is All Saints' Day, a Christian feast dedicated to celebrating the faithful departed, including all the saints. In Christian tradition, people start celebrating major feasts the night before they take place — take Christmas Eve, for instance.

The day's morbid traditions go back to ancient times. 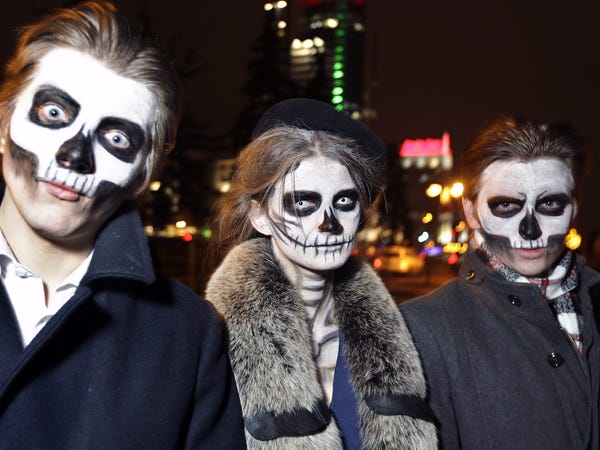 Historians have linked Halloween to Samhain, the Celtic festival of the summer's end celebrated in Ireland, Scotland, and the Isle of Man.

According to Celtic mythology, the veil between the Otherworld and our world thins during Samhain, making it easier for spirits and the souls of the dead to return.

People would make offerings of food in order to get on the good side of these spirits and departed ancestors, according to the Mirror.

Allhallowtide, which includes All Saints' Eve, All Saints' Day, and the subsequent All Souls' Day, was initially celebrated in the spring, during the early years of the Church.

Pope Gregory IV switched it to the current date in 837, according to Britannica. His reasons were unclear, although influence from Celtic factions of the church and the fact that it makes sense to commemorate death during the fall are possibilities.

Bobbing for apples used to be more than just a splashy party game. 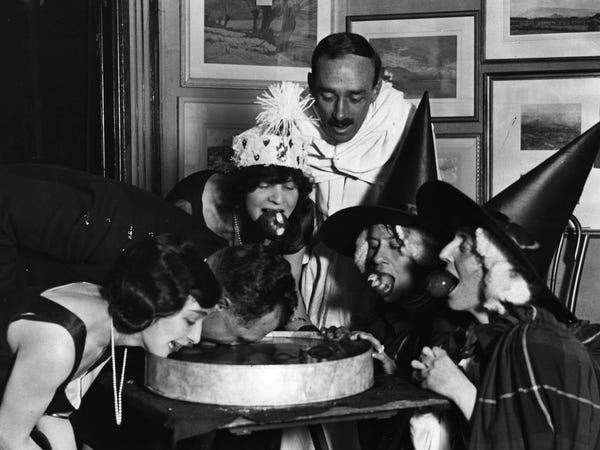 Halloween has come to be most closely associated with the pumpkin, but apples have played an important role in its history.

After all, apples make numerous appearances in Celtic mythology and are often connected to the Otherworld.

The reason? Well, the practice used to be considered a form of divination performed around Halloween, according to NPR. That's right — people would dunk their heads in a vat of water and try to bite into floating fruit in a quest to figure out their future spouse.

Ladies would mark an apple and toss it into the tub. The thinking was they'd be destined to whoever pulled it out of the water.

Jack-o'-lanterns symbolize a fateful deal with the Devil. 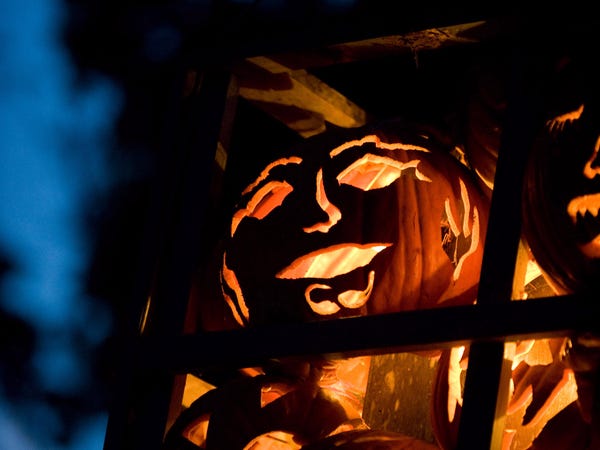 If you ever meet the Devil on a darkened road, don't try to trick him into climbing a tree.

Modern day, intricately designed pumpkin creations certainly make for impressive decorations. But back in the day, folks in Ireland dubbed their carved, fiery turnips "jack-o'-lanterns" thanks in part to an ominous legend.

One night, a conniving local drunkard named Jack trapped the Prince of Darkness in a tree by hacking a sign of the cross into the bark. In exchange for letting Satan climb down, Jack had him vow to never claim his soul.

Jack proceeded to act like a jerk his whole life. When he died, he was not allowed in heaven. So he tried to return to his old pal, the Devil. But Satan upheld his end of the deal, hurling a piece of coal from hell at the dead man for good measure.

Left without anywhere to go, Jack placed the blazing coal in a turnip to use as a lantern. The dead man then set out, doomed to wander until he can find an eternal resting place.

Trick-or-treating has ancient precedent — but the candy part didn't come about until much later. 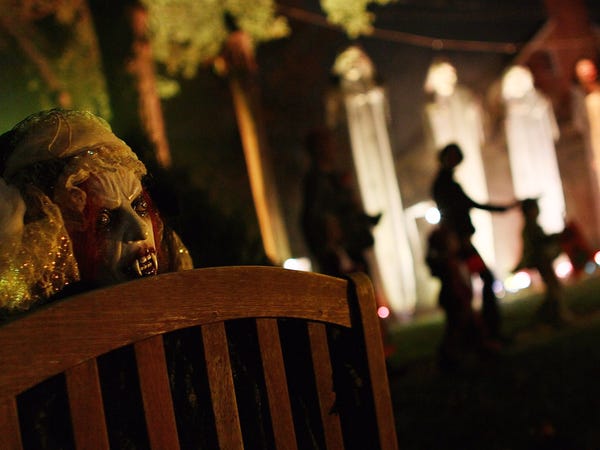 Modern day trick-or-treating is a confluence of various traditions.

Ancient Celts dressed up as evil spirits in order to confuse demons, according to Smithsonian Magazine.

In medieval England, "soulers" would go around begging rich folk for "soul cakes" on Halloween. Instead of threatening to play tricks, however, they'd pray for peoples' souls in return for the cake, according to "The Compleat Teacher's Almanack."

Throughout medieval Europe, mummering — dressing in disguises and visiting neighborhoods while dancing, playing music, and doing tricks — was popular on major feast days.

TIME reported Irish and Scottish immigrants brought "souling" to the States in the 1800s. But modern day trick-or-treating didn't catch on in the US until the 1920s.

The practice was pretty controversial into the 1950s, though. According to the American Journal of Play's "Gangsters, Pranksters, and the Invention of Trick-or-Treating," many adults raised "stern objections" to trick-or-treating over the decades, as it was often viewed as a form of extortion.

The "Bloody Mary" ritual has unclear origins (and various practices). 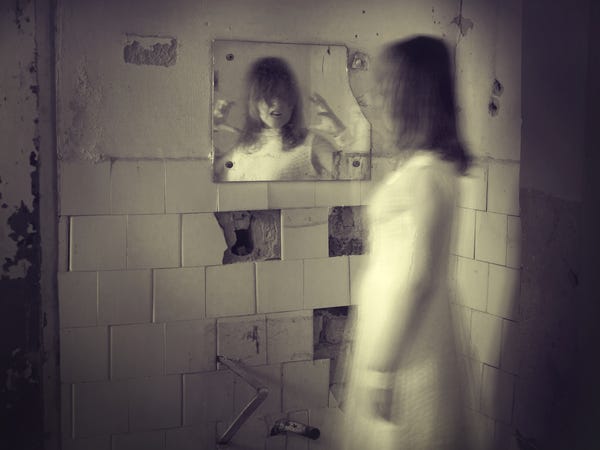 Late folklorist and UC Berkeley professor Alan Dundes wrote an article titled "Bloody Mary in the Mirror: A Ritual Reflection of Pre-Pubescent Anxiety" about the various origins and practices of the "Bloody Mary" ritual, also known as "Mary Worth" and "Mary Whales."

Many versions of the ritual include the elements of a girl peering into a mirror (often in a bathroom), darkness, blood, chanting, and the appearance of the cursed "Mary."

Black cats have been associated with the supernatural for hundreds of years. 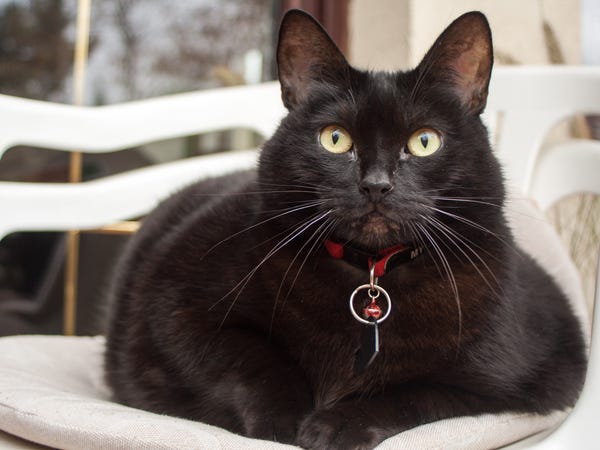 "In the Middle Ages, black cats were often portrayed as the familiars of witches, which is likely to be the origin of the distrust with which they are regarded in America, where early Puritan settlers rejected anything associated with the Devil and witch," Chloe Rhodes wrote in "Black Cats and Evil Eyes: A Book on Old-fashioned Superstition."

According to History.com, it was also believed in the Middle Ages that witches transformed into black cats to conceal themselves.

Rebecca Aydin contributed to an earlier version of this post.