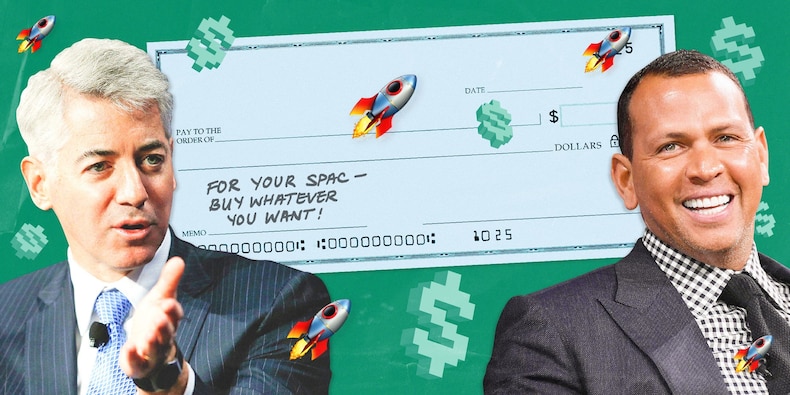 The SPAC market has been on fire during the pandemic. In fact, 219 special purpose acquisition companies raised a record $73 billion in 2020, representing a 462% year-over-year jump in proceeds raised by blank-check firms.

In the first quarter of 2021 alone, there were $166 billion of deals across roughly 400 SPACs currently looking for companies to take public. SPACs are so hot even celebrities like Alex Rodriguez and Colin Kaepernick are getting involved.

Some praise SPACs as a way to give retail investors access to returns from companies with monumental runways for growth when in the past they'd be forced to wait for an IPO to get exposure.

On the other hand, some experts – including Andrew Park of Americans for Financial Reform and Renee M. Jones of Boston College Law School – say SPACs should be reined in.

In a letter to the House Financial Services Committee, Jones and Park said that they believe SPACs are "fueled by conflicts of interest and compensation to corporate insiders at the expense of retail investors."

According to data from "A Sober Look at SPACs" by Klausner, Ohlrogge, and Ruan 2020, average returns for SPACs 12 months after their merger was negative 34.9% between January 2019 and June 2020.

With this in mind, Insider talked to professors, registered investment advisors, corporate accounting experts, and more about the risks of SPACs.

Here's what they had to say about what investors should be looking for in their next SPAC investment:

1. "When an investor buys shares in a SPAC before a merger and holds those shares through the time of the merger and thereafter, he is paying at least $10 per share, and these days much more, for something like $7 in cash per share to invest in a target company. Assuming the target knows what it is getting and negotiates with the SPAC accordingly, the SPAC shareholder will bear the cost of that shortfall.

"Of course, the SPAC bubble may continue for a while, and the investor's bet could work out well for that reason.And even before the bubble, some of these deals did work out well for SPAC shareholders.But, an investment in a SPAC merger is either a bet on the bubble, or a bet that the sponsor can create a lot of value for SPAC shareholders following the merger. Historically, such post-SPAC value creation has not been common." – Michael Klausner, Nancy and Charles Munger Professor of Business and Professor of Law at Stanford Law School

2. "The main risk with a SPAC versus a traditional IPO is the baseline revenue numbers that are used to value the company. In a traditional IPO, a company cannot use forward guidance (projections) to justify its valuation. The SPAC route allows a company to show projected revenue numbers and get valued off of future earnings. – Mike Murphy, Rosecliff CEO and Managing Partner

3. "Despite all of the hype, investors need to tread very carefully and face two very important decision points: deciding to invest in the SPAC, and the decision to stay with the business combination once it is announced. And making the wrong choice at either of these junctures could come with potentially massive consequences.

"Therefore, it is imperative that, initially, investors perform independent financial and reputational due diligence of both the investor team and the strategy of the SPAC itself. Once this assessment has been conducted, and an acquisition target is identified, investors will need to ask questions including whether the target is ready to go public, what the history and strength of its management is, and what broader market risks exist, among other things." – Julie Copeland and Sarah Keeling, Partners at StoneTurn

4. "SPACs should generally be avoided by retail investors because the SEC is unable to do its normal detailed company review of the IPO, as no operating company has even been identified at that point.As a result, investors would have no idea what they are buying.Invariably, many will suffer losses." – Dr. Howard M. Schilit, Founder and CEO Schilit Forensics, LLC and author of Financial Shenanigans

5. "SPAC concerns. 1. SPAC sponsors have different incentives than SPAC investors.Investors have put up most of the capital, while sponsors are usually able to obtain ownership at a discounted price generally through dilution when the SPAC makes an acquisition.

"Therefore, sponsors have a greater financial incentive to get a deal done and might be less concerned with the longer term returns to investors. 2. Investors face high dilution.Dilution comes from three sources: First, SPAC sponsors compensate themselves with the 'promote' which can be up to 25% of the SPAC's IPO proceeds.Second, investors who redeem their shares prior to IPO receive interest and retain warrants. Third, the SPAC pays underwriting fee for the IPO."- John Ingram, Partner and Chief Investment Officer, at Boston-based RIA Crestwood Advisors.

6. "Given the rapid rise in the number of SPACs there is a lot of capital competing for deals right now, so sponsors may feel the need to overpay in order to get the deal. To this point, we did a quick screen on Bloomberg of U.S. domiciled SPACs and found there are currently 593 SPACs listed. A year ago there were 161. So a significant increase in the number of SPACs. Not all of them are going to find good deals." – Matt Dmytryszyn, Director of Investments, Telemus, an RIA based in Southfield, Michigan

7. "While the SPAC universe is likely to continue to grow, we would be cautious and stress that due diligence is extraordinarily important in this space. Its allure is driven by the celebrity names, many of whom have little to no investing experience. In addition, you are taking a bet that an attractive company will appear and if one does not there is opportunity lost as you have tied up money that may have earned more elsewhere (e.g., traditional private equity). – Megan Horneman, Director of Portfolio Strategy at Verdence Capital Advisors

8. "If you go and make an investment like that, you need to be prepared that you could potentially lose all of your money. You could potentially not have any return on your money because it takes two years potentially for this to go through its cycle process of getting an IPO done." – Andrew Smith, chief investment strategist, Delos Capital Advisors who told Insider SPACs are one of the riskiest investments in the market.