“For the first time in my life I’m getting an artificial tree,” she says. “I’ve always had a real tree but have started to think about what happens afterwards, and I will be able to reuse it.”

Even aside from Christmas, new, more sustainable, shopping ideas are becoming mainstream and John Lewis has just announced an environmental push that will soon enable customers to rent their furniture rather than buy, and to recycle products such as mattresses and clothing at the end of their life.

What is John Lewis’s new strategy?

Sharon White’s strategy to resurrect the fortunes of John Lewis includes a raft of measures – from cutting costs to expansion outside retail. The store group’s plans include:

“I probably wouldn’t rent something,” says Ukstina. “I would prefer to have my own things so I’d buy it secondhand.”

Ukstina admits she doesn’t usually shop in the department store chain because it is too expensive, but she is spending a gift token. She is also wary about whether renting makes financial sense: “Renting could end up costing you more in the long run.”

In the furniture department Jacquie Gosney is sizing up a traditional high-backed Parker Knoll chair that costs about £1,000. Gosney, who is in her late 70s, doesn’t think renting is for her either.

“I’m old, and might not survive the pandemic,” she quips. Gosney is out shopping after reinstating the walls in her open-plan home to make it cosier, so she needs to buy smaller furniture. “Covid has shut so many shops. I used to go to Laura Ashley but it closed.” 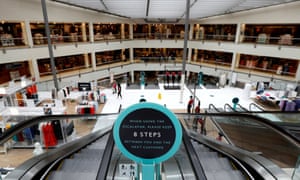 Gosney has been a loyal John Lewis shopper for many years but complains the current furniture is too young for her tastes. “I’m surprised by the selection for oldies – it is all ultra modern. I’m into Parker Knoll chairs, not furniture on spindly legs.”

The pandemic has made it difficult to pass on her unwanted furniture, she says, even to charity, so she is considering using her street’s WhatsApp group, where neighbours trade or give away belongings.

John Lewis has traditionally been famed for its customer service and for selling high-quality products, but its crown has slipped a little in recent years.

Mary Lane, out shopping with her daughter Gabrielle Gale, has just spent £2,000 on a cooker and admits she did not even visit other stores before sealing the deal, as she was reassured by the John Lewis badge of quality and the “never knowingly undersold” price promise.

Gale says she would be interested in the employee-owned group’s new ideas which also include selling more financial products and garden centres. “I love John Lewis and anything that help keeps them afloat is a good idea,” she adds. “The high street is dying so they have to think differently.”

One of the boldest new ideas being pursued by the group’s chairman, Sharon White, is to become a residential landlord, building rental flats to “furnish using John Lewis home products and deliver Waitrose food”.

To some, the combination sounds like living the middle-class dream.

“That sounds amazing, I love John Lewis,” says Jessica Lumley, another shopper browsing the toys. “I like that the business is a partnership and am very aware of that. I don’t know how that works out if you are a staff member, but I love the idea.”