New York (CNN Business)Employer Covid-19 vaccine mandates have become increasingly common. So has public acceptance, but opposition to some of those rules remains strong.

A series of recent survey questions show a clear majority is on board with various groups of workers, such as health care workers, government employees or teachers, being required to get vaccine or stop working. But a clear split remains over requiring a broader range of employees to get vaccinated — unless they are given the option of being tested weekly for Covid to remain unvaccinated.
Still, public acceptance of vaccine requirements is growing stronger, especially compared to earlier this spring. Since that time the number of people who have been vaccinated has risen — as the number of cases, hospitalizations and deaths rose too. Public health experts agree that the unvaccinated are greatly responsible for those surges.

“There seems to be slightly more acceptance of the idea of mandates,” said said Liz Hamel, vice president and director of public opinion and survey research at KFF, the health care think tank that is one of the groups conducting the surveys. “But I wouldn’t call it popular.”

Polling firm Gallup found similar growth in support for mandates compared to earlier polls. Both surveys were taken since the Biden administration disclosed plans to implement a series of rules that will require vaccines for some specific groups, and for businesses with 100 or more employees to require either vaccination or testing. The KFF surveyed 1,500 people between September 13 and 22, while Gallup surveyed 4,000 between September 13 and 19.

Both found just over 60% of those surveyed support vaccine mandates for employees at hospitals and other health care facilities. The Gallup survey also found that 60% support vaccines for federal government employees, while KFF found 55% supporting such a mandate. Both those specific groups would likely be required to get vaccinated under the Biden administration proposal.
A clear majority favored vaccine requirements for teachers and other school staff, with 63% support in the Gallup reading and 58% in KFF.
The KFF survey found 50% opposed to the employers in general requiring vaccination, compared to 48% supporting. However that jumped to 58% support if the option for vaccination or testing was included. Gallup also found 58% supporting the requirement of vaccination or testing for businesses with 100 or more workers.
Gallup also found that 58% of workers would strongly or somewhat favor their own employers requiring vaccine, even without a testing option. That’s up from 52% support back in an August survey and only 42% support in May.
By comparison KFF found that 50% did not want their own employers to require a vaccination. It also found that 19% worked for employers who already required a vaccination and 28% would like their employers to institute such a rule.
Both surveys found that the percent working for employers with such rules has risen steadily in recent months. In KFF’s June survey, only 9% were working under an employer vaccination mandate. Gallup found an even bigger rise, from only 6% facing a vaccination mandate at their work in June to 29% in September. 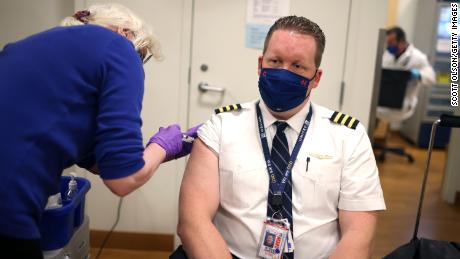 KFF found the testing option would keep many unvaccinated workers on the job if their employers did implement such a mandate. Among those unvaccinated workers, 56% said they would get tested weekly if given the option, 12% said they would get the vaccine and 30% planned to leave their job. In June, when unvaccinated workers were asked simply what they would do if required to get the vaccine, with no option to avoid it with testing, 48% said they’d get vaccinated and 50% said they’d leave their jobs.
Hamel said it’s possible that many of those who said they’d leave their jobs in a survey won’t follow through on that when faced with termination. United Airlines (UAL) disclosed this week that as its strict vaccine requirement went into effect for US workers, less than 1% faced being fired for not getting a vaccine, and less than 3% have applied for a medical or religious exemption from the rule.

Unsurprisingly, the KFF survey found a wide split in views on employers requiring vaccines for all but those with a medical reason not to get the shot. It found 85% of unvaccinated people opposed such rules ,and 13% of those unvaccinated said they’d support such a rule. Hamel said it’s possible some intend to get a shot if required, or perhaps because they can’t get a shot themselves for medical reasons and want to work among others who are vaccinated.
KFF also found that 62% of the vaccinated supporting the stricter employer vaccine mandates, with no testing option. But even among those who have been vaccinated, 36% oppose such a mandate.
Source: Read Full Article