Target Circle will be available to shoppers in the United States beginning October 6. Program perks include earning 1% on Target purchases, personalized deals and early access to its sales. The launch follows an 18-month test in six cities that garnered 2 million members.
The expansion of the loyalty program complements Target’s branded credit card, Redcard, which only a quarter of its customers use. It also replaces Cartwheel, a separate discount program, in an attempt to offer a “more seamless, intuitive shopping experience.”

The program is free. Target will begin automatically enrolling members that have Target.com and Redcard accounts. To use it, customers can swipe a barcode from the Target app or provide their phone number at checkout.
The company has said earlier this year that Target Circle also gives the company more data about shopping habits. For example, if Target knows a shopper frequently buys diapers and baby products, it could email the customer an offer for diapers. 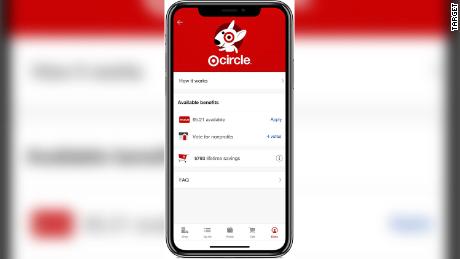 “This will help Target build a more complete picture of shoppers,” said Neil Saunders, managing director at GlobalData Retail previously told CNN Business. “It gives customers a little incentive to go to Target.”
Target (TGT) is the latest retailer to revamp its loyalty program because retailers are recognizing that they need new perks to encourage them to keep returning.