The Weather Channel on Friday announced it will no longer use the term “Dixie Alley” on its television network. The term describes the region of the southern U.S. that’s prone to deadly tornado outbreaks.

“Effective immediately, we will discontinue use of the racially-insensitive term ‘Dixie Alley’ – and I call on others in the industry to do the same,” Byron Allen – CEO of Allen Media Group, parent company of The Weather Channel television network – said in a statement.

“We must all work harder to become ONE America,” he added.

“Dixie” is a nickname given to the 11 southern states that formed the Confederacy in 1861, seceding from the Union and leading to the Civil War.

“Dixie Alley” includes tornado-prone states such as Alabama, Mississippi, Arkansas, Louisiana and Tennessee. It was created to differentiate the region from the more well-known “Tornado Alley,” which includes the Plains states of Texas, Oklahoma, Kansas and Nebraska.

A fierce tornado outbreak this week hit several states in the South, destroying property and injuring two people in Alabama. No fatalities were reported. 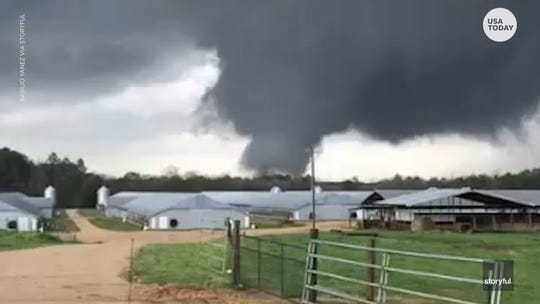 A tornado touched down in Wayne County, Mississippi, ripping through the area and leaving damage in its wake. (Photo: Basilio Yanez via Storyful)

Multiple country music groups have publicly distanced themselves from the term “Dixie,” citing its ties to the Confederacy and slavery.

“Because of those roots, the word has fallen out of favor lately – the band The Dixie Chicks even renamed themselves The Chicks” in 2020, the Wrap said.

In 2018, Dolly Parton changed the name of her “Dixie Stampede” dinner attraction in Pigeon Forge to “Dolly Parton’s Stampede.”

While there are more tornadoes in Tornado Alley, more destructive outbreaks tend to occur in the South.

Tornadoes in the South tend to be deadlier than those in the Plains because of several factors such as longer, larger tornado paths, expanding population, more mobile homes and more nighttime tornadoes.

On average, about 40 people die each year in the nine states that make up the southeastern U.S.

Alabama tallies the highest death toll annually with an average of 14, according to data from the National Weather Service’s Storm Prediction Center.