(CNN)The US Capitol is once again secured but four people are dead — including one woman who was shot — after supporters of President Donald Trump breached one of the most iconic American buildings, engulfing the nation’s capital in chaos after Trump urged his supporters to fight against the ceremonial counting of the electoral votes that will confirm President-elect Joe Biden’s win.

Shortly after 1 p.m. ET Wednesday hundreds of pro-Trump protesters pushed through barriers set up along the perimeter of the Capitol, where they tussled with officers in full riot gear, some calling the officers “traitors” for doing their jobs. About 90 minutes later, police said demonstrators got into the building and the doors to the House and Senate were being locked. Shortly after, the House floor was evacuated by police. Vice President Mike Pence was also evacuated from the chamber, he was to perform his role in the counting of electoral votes. 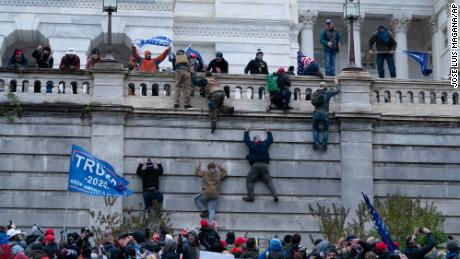 An armed standoff took place at the House front door as of 3 p.m. ET, and police officers had their guns drawn at someone who was trying to breach it. A Trump supporter was also pictured standing at the Senate dais earlier in the afternoon.

A woman, who is yet to be identified, died after being shot in the chest on the Capitol grounds, DC police confirmed to CNN. More information on the shooting was not immediately available and a police spokesperson said additional details will come later. DC Police Chief Robert Contee said three other people died from medical emergencies during the riot.
“One adult female and two adult males appear to have suffered from separate medical emergencies, which resulted in their deaths. Any loss of life in the District is tragic and our thoughts are with anyone impacted by their loss,” Contee said at a news conference Wednesday night.

Multiple officers have been injured with at least one transported to the hospital, multiple sources tell CNN.
Smoke grenades were used on the Senate side of the Capitol, as police work to clear the building of rioters. Windows on the west side of the Senate have been broken, and hundreds of officers are amassing on the first floor of the building.
The Senate floor was cleared of rioters as of 3:30 p.m. ET, and an officer told CNN that they have successfully squeezed them away from the Senate wing of the building and towards the Rotunda, and they are removing them out of the East and West doors of the Capitol. It’s not clear if any of the individuals have been taken into custody.
The US Capitol Police worked to secure the second floor of the Capitol first, and were seen just before 5 p.m. pushing demonstrators off the steps on the east side of the building. With about 30 minutes to go before Washington, DC’s 6 p.m. ET curfew, Washington police amassed in a long line to push the mob back from the Capitol grounds.
It took until roughly 5:40 p.m. ET for the building to once again be secured, according to the sergeant-at-arms.
The stunning display of insurrection was the first time the US Capitol had been overrun since the British attacked and burned the building in August of 1814, during the War of 1812, according to Samuel Holliday, director of scholarship and operations with the US Capitol Historical Society.
The shocking scene was met with less police force than many of the Black Lives Matter protests that rolled across the country in the wake of George Floyd’s killing at the hands of Minneapolis police officers last year. While federal police attacked peaceful protesters in Lafayette Square outside the White House over the summer, clearing the way for Trump to take a photo in front of a nearby church at the time, protesters on Wednesday were able to overrun Capitol police and infiltrate the country’s legislative chambers.

An afternoon of chaos

The protesters first breached exterior security barriers, and video footage showed protesters gathering and some clashing with police near the Capitol building. CNN’s team on the ground saw a number of protesters trying to move up the side of the Capitol building. Several loud flash bangs were heard as well.
Protesters could be seen pushing against metal fences and police using the fences to push protesters back, while other officers reached over the top to club people trying to cross their lines.
Flash bangs could be heard near the steps of the Capitol as smoke filled the air. In some instances officers could be seen deploying pepper spray. Tear gas was deployed, but it’s not clear whether by protesters or police, and people wiped tears from their eyes while coughing. 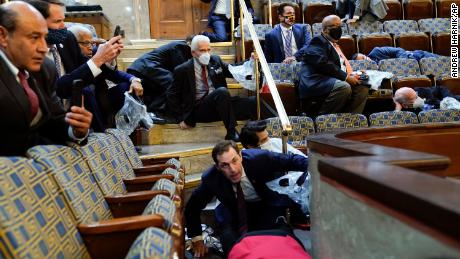 After the building was breached, the Capitol police officer in the House chamber told lawmakers that they may need to duck under their chairs and informed lawmakers that protesters were in the building’s Rotunda. Lots of House members were seen wearing gas masks as they move between Capitol buildings. Members were calling family to say they are OK. 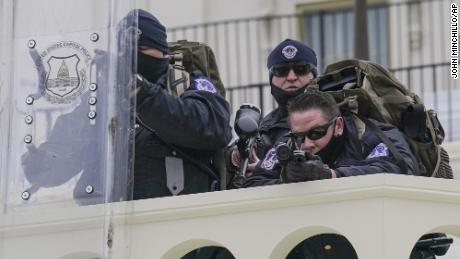 Congressional leaders were being evacuated from the Capitol complex just before 5 p.m. ET and were set to be taken to Fort McNair, a nearby Army base in Washington, according to a federal law enforcement official.
Trump has directed the National Guard to Washington along with “other federal protective services,” according to White House press secretary Kayleigh McEnany. The entire DC National Guard has been activated by the Department of Defense, according to the Pentagon.
“The D.C. Guard has been mobilized to provide support to federal law enforcement in the District,” said Jonathan Hoffman, the chief Pentagon spokesman. “Acting Secretary Miller has been in contact with Congressional leadership, and Secretary McCarthy has been working with the D.C. government. The law enforcement response will be led by the Department of Justice.” 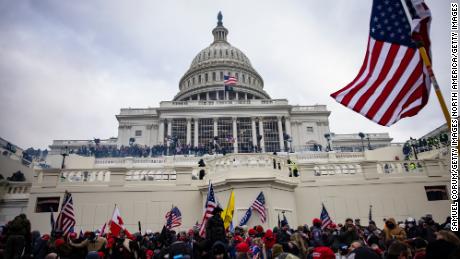 The official said DC National Guard was not anticipating to be used to protect federal facilities, and the Trump administration had decided earlier this week that would be the task of civilian law enforcement, the official said.
Washington Mayor Muriel Bowser announced a citywide curfew from 6 p.m. ET on Wednesday until 6 a.m. ET Thursday. 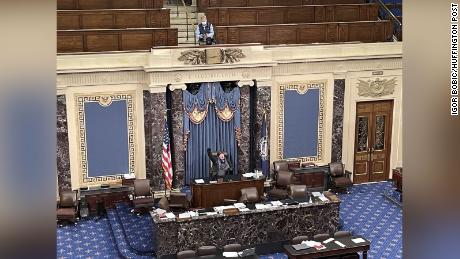 Lawmakers return to the Capitol

Lawmakers began returning to the Capitol after the building was secured and made it clear that they intended to resume their intended business — namely, confirming Biden’s win over Trump by counting the votes in the Electoral College.
Proceedings resumed at about 8 p.m. ET with Pence — who never left the Capitol, according to his press secretary — bringing the Senate session back into order.
“Let’s get back to work,” Pence said.
House Speaker Nancy Pelosi said in a statement earlier Wednesday evening that congressional leadership wanted to continue with the joint session Wednesday night.
“Today, a shameful assault was made on our democracy. It was anointed at the highest level of government. It cannot, however, deter us from our responsibility to validate the election of Joe Biden,” Pelosi wrote.
“To that end, in consultation with Leader Hoyer and Whip Clyburn and after calls to the Pentagon, the Justice Department and the Vice President, we have decided we should proceed tonight at the Capitol once it is cleared for use. Leader Hoyer will be sending out more guidance later today.”
Republicans who planned to object to multiple states the Biden won were strategizing among themselves while the Capitol was locked down, and it’s not clear if they will draw out the process as originally planned.
One Senate aide said an agreement is not yet finalized to expedite the proceedings but they are still working on it. Sources say the effort is to find a way for the objectors to be able to use the Arizona objection, which was made before the mob stormed the building, as the vehicle for anything the Senate GOP objectors want to say, take the vote on that objection — which will fail — and then move forward quickly with the rest of the process without more objections, per two sources
Senate Majority Leader Mitch McConnell said on the floor that the “United States Senate will not be intimidated. We will not be kept out of this chamber by thugs, mobs or threats.” He added, “We will certify the winner of the 2020 presidential election.”

Trump finally called on his supporters to “go home” hours after the riot started, but spent a large amount of time in the one-minute video lamenting and lying about his election loss.
In one stunning line, Trump told the mob to “go home,” but added, “We love you. You are very special.”
Trump struck a sympathetic tone to the rioters he himself unleashed saying, “I know your pain, I know you’re hurt. We had an election that was stolen from us. It was a landslide election and everyone knows it. Especially the other side. But you have to go home now. We have to have peace.”
However, later on in the evening Trump justified the mob’s actions and praised them.
“These are the things and events that happen when a sacred landslide election victory is so unceremoniously & viciously stripped away from great patriots who have been badly & unfairly treated for so long. Go home with love & in peace. Remember this day forever!” he said, in a tweet that was later deleted by Twitter.
Others inside the President’s orbit tweeted their calls for calm as the mob repeatedly attempted to take over the building.
Donald Trump Jr., the President’s son, said that his supporters who mobbed the Capitol were “wrong and not who we are.”
“Be peaceful and use your 1st Amendment rights, but don’t start acting like the other side. We have a country to save and this doesn’t help anyone,” he tweeted.

Federal and local law enforcement responded to reports of possible pipe bombs in multiple locations in Washington, DC, according to a federal law enforcement official. It’s unclear if the devices are real or a hoax, but they’re being treated as real. 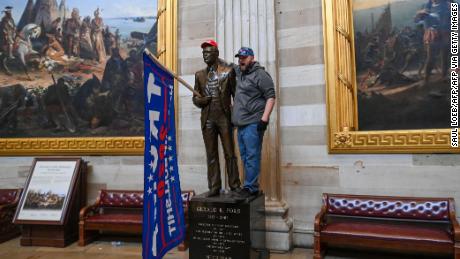 A pipe bomb was found at the Republican National Committee’s headquarters earlier Wednesday, an RNC official told CNN. The device was found on the ground outside, along the wall of the headquarters. It was safely detonated by the police, the RNC official said.
At least two suspected pipe bombs were rendered safe by law enforcement, including the one at the building that houses RNC offices and one in the US Capitol complex, a federal law enforcement official told CNN. The official said these were real explosive devices and they were detonated safely.
The Democratic National Committee was also evacuated after a suspicious package was being investigated nearby, a Democratic source familiar with the matter told CNN. The party had preemptively closed the building ahead of the protests, the source said, but a few security and essential personnel were evacuated.

Near the scene where one of the pipe bombs was found Wednesday, police found a vehicle and detained a suspect, and found a rifle and as many as 10 Molotov cocktails, according to a federal law enforcement official. Investigators are working to determine whether there’s a connection to the bombs found earlier.
This story has been updated with additional developments on Wednesday.
Source: Read Full Article