A total collapse in passenger numbers and profits, the future of high margin business class travel in doubt, a staggering rise in debt burdens, crippling losses at regional and even major hubs, airports, aircraft manufacturers and their suppliers in dire straits – few if any industries have been quite as badly hit by COVID as aviation. Given what’s happened, it is astonishing there’s still an airline flying.

Another northern hemisphere summer like the present one and quite possibly there wouldn’t be; I exaggerate only a little. Even International Airlines Group, owner of British Airways and one of the more solvent of the big legacy airline companies, would struggle to survive the loss of a third summer. 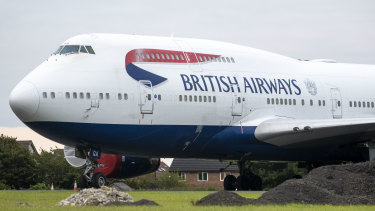 In anticipation of permanently lower levels of such traffic, the company has already retired the remainder of its fleet of 747 jumbos, three years earlier than originally planned.Credit:Getty

Unlike many of its European peers, BA has so far managed to avoid a government bailout. From Lufthansa to TAP Air Portugal, Air France-KLM, Air Baltic and, inevitably, Alitalia, which has had so many government rescues over the last two decades that I long since lost count – they’ve all had oodles of government money since the pandemic began.

State aid was one of the big sticking points during Brexit negotiations, with the EU insisting that Britain establish a similar regime to its own so as to prevent unfair competition. What this means in practice, I imagine, is that it is perfectly fine for EU member states to find ways around the rules – in Air France’s case giving up a few unwanted slots at Paris’s Orly airport was enough to do the trick – but not the UK, which will be expected rigidly to adhere to the rules if and when applied. BA had better hope it doesn’t come to that.

But nor should it. Despite recent alarm over rising infection rates, the news on the pandemic continues to look reasonably positive. The findings of an Israeli study, confirmed by similar reports from the US, that the Pfizer vaccine isn’t nearly as effective as initially hoped in preventing infection by the delta variant, has admittedly given everyone a terrible fright. But vaccines are still very good at preventing serious illness, it seems, and that’s what matters most.

Even so, for many airlines, returning to the pre-existing normality already looks a long shot. The pandemic has galvanised far reaching and likely permanent structural change; those that don’t recognise it will either require equally permanent government support, or they will indeed collapse.

Passenger numbers this year are expected to rise globally by 62 per cent off the depressed 2020 base, according to the latest Iata forecasts but will still be down almost 30 per cent compared with 2019. A full recovery to 2019 levels is not expected until 2023, one year later than previously forecast.

True enough, domestic traffic in some regions – notably Russia, China and the United States – is already at or close to pre-pandemic levels, but these are all big internal markets not subject to the cross border restrictions that affect international travel. It is in international traffic, particularly long haul, where change is going to be most acutely felt.

One of those who believes there will be a significant and permanent hit to the mix of this traffic is John Strickland, veteran aviation analyst. Leisure travel, both short and long haul, should recover relatively quickly, he believes. Most of us will be back on the plane as soon as we are allowed. Two staycations in a row is enough.

For airlines, however, that’s just the half of it. Most of the profits earned on long-haul flights are generated by a relatively small number of high-yielding passengers, often travelling for business and therefore willing to pay more for a premium service. The financial contribution from leisure passengers, by contrast, is negligible, and often even negative, even though they fill most of the seats and help cover a portion of fixed costs. 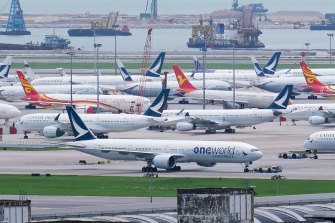 The pandemic has caused havoc for airlines around the world.Credit:Bloomberg

It is business travel which is likely to prove particularly vulnerable to long lasting effects of COVID. Many companies have found they can conduct much of their international business perfectly adequately over Zoom. There will always be some call for face-to-face contact, but for both budgetary and environmental reasons, many businesses will be using the pandemic to permanently cut back on air miles.

The writing is on the wall but despite all we’ve been through, some airlines, particularly the big European flag carriers, are proving bizarrely slow to act on it. Not so British Airways, highly reliant as it once was on lucrative transatlantic business class travel. In anticipation of permanently lower levels of such traffic, the company has already retired the remainder of its fleet of 747 jumbos, three years earlier than originally planned. It has also bulldozed through sweeping job cuts and working practice reform. When these plans were first announced soon after the pandemic began, Unite, the main BA trade union, accused the company of “betrayal”, of a particularly cynical piece of cost cutting just as workers were feeling it most.

The “all in it together” national mood of the time ensured considerable political and public support for Unite’s campaign. Few fully anticipated back then quite how long airlines would be out for, or the long-term behavioural changes the pandemic would bring about. In the event, BA’s foresight stands it in relatively good shape for the future, unlike some slower to act rivals. But then if the worst comes to the worst, they’ve always another government bailout to fall back on.