Last August, revellers in Wuhan were filmed at a pool party, packing into a theme park in crowds reminiscent of times before the pandemic.

It startled much of the rest of the world as countries continued to battle Covid and tentatively tried to reopen their economies after a devastating first wave. 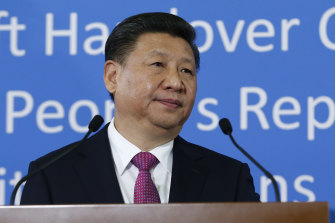 China’s economy is starting to show signs of weakness as the Delta variant spreads.Credit:AP

The city where the virus first reared its ugly head appeared to be declaring victory, rubbing other nations’ faces in it with scenes of unbridled fun.

Such was the apparent success of the country’s “zero Covid” strategy.

A year on, Wuhan is testing its entire population. The Delta variant has reached more than 20 cities. Beijing has urged residents not to travel, and regional transport links have been slashed to control movements.

China’s rules are significantly tougher than those in the UK, US or even fellow zero-Covid champion New Zealand, according to online science publication Our World In Data. So what went wrong?

Tight lockdowns to stamp on the smallest outbreak were held up as an example to the rest of the world, with campaigns in countries including Britain calling for the same here.

But when it comes to reopening, China finds itself stuck in a seemingly endless game of whack-a-mole, cracking down rather than learning to live with Covid as an endemic but decreasingly deadly disease.

It is not the only country that tried to wipe the virus out. Australia sealed its borders and imposed tough restrictions. Its death count is also low – fewer than 1000 have died of Covid, an enviable figure in comparison to more than 130,000 in the UK.

Sydney’s citizens are being forced to stay at home. Canberra has announced a snap lockdown after its first case of local transmission since the early days of the pandemic. Melbourne has extended its latest shutdown.

The economic effects are starting to show. Controlling the virus at first had clear benefits – China’s economy rebounded much faster than most. Australia suffered a smaller recession than the majority of rich nations.

But a failure to reopen is weighing down growth. Economists are slashing forecasts for both nations.

George Tharenou, chief economist at UBS, predicts Australia’s GDP will fall by around 2.5 per cent in the third quarter.

It is more the response than the virus itself which is the issue. It is completely untenable. But it depends whether or not there is a way they can adopt a different strategy without being seen to completely U-turn.”

Goldman Sachs cut its outlook for China to an annualised rate of 2.3 per cent for the quarter, less than half its previous prediction of 5.8 per cent.

Freya Beamish, chief Asia economist at Pantheon Macroeconomics, says China has “done really well” to keep the virus suppressed, but is currently on track for a “horrible” third quarter economically.

Lockdowns and restrictions are squashing consumer confidence, with serious knock-on effects, says Rory Green, head of China and Asia research at TS Lombard: “It is crucial for the recovery of Covid-impacted services – things like tourism, accommodation, retail and catering, which together accounted for around 20 per cent-25 per cent of all jobs in China in 2019.”

That said, China does not have much alternative given its limited vaccine rollout, and it is not clear how well its domestically produced Covid jab performs against the Delta variant.

Iris Pang, chief economist for Greater China at ING, says a lockdown is the best option and one that she believes will happen “sooner or later” regardless.

“Personally, I think this is a good model,” she says. “If you lockdown right away there will be less loss of life, the lockdown period should be shorter and more localised, and therefore you save more lives and it does not disrupt the economy as much.

“Whether it is permanent depends on the effectiveness of their vaccines.”

China wants 50 per cent of the population to be fully vaccinated by the end of the year.

Australia has explicitly tied reopening plans to progress on vaccines. Once 70 per cent of adults are fully vaccinated, the Government expects to loosen a little with low-level restrictions and effective track and trace. At this stage, it says “lockdowns less likely but possible”, and “safe and proportionate quarantine” at international borders will be in place.

Deutsche Bank estimates the country will get to that stage in December at current vaccination rates.

Once 80 per cent of adults are double jabbed, the plan is to exempt vaccinated residents from all domestic restrictions and keep “highly targeted” lockdowns only.

Tim Baker, equity strategist at Deutsche Bank, says this long stretch of repeated lockdowns is beginning to weigh on consumer confidence, which he warns “doesn’t bode well for consumer spending”, particularly against a backdrop of weak retail sales that have been flat for six months.

Yet public appetite for absolute control on Covid appears high. If it is hard for Australia to break out of the zero-Covid cycle, it is tougher for China where the Communist regime often finds it harder to change tack, particularly on flagship policies. 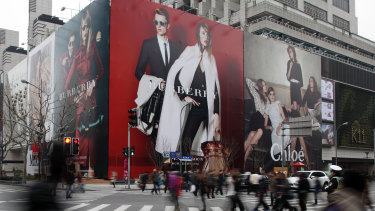 Ben May, a director at Oxford Economics, says elimination of the virus looks less sustainable as the rest of the world learns to live with Covid.

“The growing likelihood that Covid will become endemic, along with the shifting costs and benefits of keeping cases low, means zero Covid may no longer be a realistic or optimal strategy beyond the near term,” he says.

As China holds firm, the rest of the world could feel the impact, says Rob Subbaraman, economist at Nomura.

He says: “What China decides is very important for the rest of the world – it is the manufacturing hub of the world. Some of the port cities are starting to face quite big restrictions. It can start to impact value-added chains again globally, which can lead to shortages of products and keep inflation higher for longer.”

As a source of demand for other economies, it is also damaging if China’s economy wobbles.

At the same time it affects China’s image on the world stage. A year ago, its water park parties added to the impression that Beijing was ascendant and the US a struggling power that was past its prime. That picture is shifting as the US rebounds powerfully and China suffers new lockdowns.

“It cannot do anything but contribute to harming China’s image,” says Neil Shearing, group chief economist at Capital Economics.

“One consequence of the pandemic is that it has accelerated the US-China decoupling.

“China is responding in part with clampdowns on private education and tech companies, and with the virus potentially being a rolling concern, it will all contribute to an impact on China’s image.”

It is an irony that China risks harming its position on the world stage by overdoing the measures that gave it a head start on the rebound.

“It is more the response than the virus itself which is the issue,” says Shearing. “It is completely untenable. But it depends whether or not there is a way they can adopt a different strategy without being seen to completely U-turn.”