Hours after the Chinese government imposed a record $US2.8 billion fine on Alibaba, a veteran internet entrepreneur urged regulators to do something similar to his company’s biggest competitor. 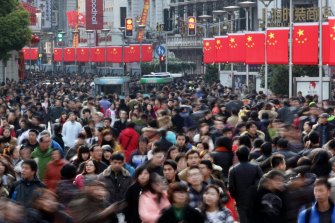 Lawsuits are flying and tempers are flaring on the Chinese internet, home to the world’s largest single group of internet users.Credit:Bloomberg

Alibaba, meanwhile, has applied to set up its own apps within WeChat, essentially daring Tencent to say no.

Lawsuits are flying and tempers are flaring on the Chinese internet, home to the world’s largest single group of internet users. Beijing made it abundantly clear late last year that it was serious about curbing the power of a handful of companies that dominate online life in China. Now China’s internet companies are kowtowing to Beijing and trying to make their rivals look bad instead of correcting their own anti-competitive behavior.

That could make the Communist Party, which controls the government and the court system alike, the ultimate arbiter over the industry. Competition wouldn’t decide winners. Beijing would.

American Big Tech has its own feuds, like the intensifying one between Facebook and Apple. Sometimes those feuds involve the government, like Microsoft and Google sparring in front of Congress. But none of those companies are trying to make the US government the final arbiter of the future of their industry.

The Chinese government has good reasons to rein in the power of Big Tech. The companies built the digital infrastructure that has become essential to ordinary Chinese lives, including shopping, banking, dining and entertaining.

They didn’t get there just by innovating. They also built tall walls and wide moats, making the Chinese internet possibly the most siloed place in the digital world.

For years, Alibaba prevented merchants using its services, like the online bazaar Taobao, from selling their goods on other shopping platforms. Tencent’s WeChat app, which has 1 billion active accounts, doesn’t allow users to share links for Taobao merchandise or Douyin short videos. Meituan, China’s dominant meal delivery app, raised commission rates for restaurants that refused to sign exclusive agreements. The first page of results from Baidu, the search company, is often filled with links to pages controlled by … well, guess who.

So far, none of these companies have announced substantial moves to correct anticompetitive practices. Instead, they are clashing and manoeuvering through the halls of power.

The same limits can be found among startups. Once startup founders accept investment from Tencent, they usually have to agree that they won’t seek investment from Alibaba. And vice versa.

The internet industry is fairly concentrated in the United States, too, but not like it is in China. Imagine a world in which, if you’re selling a product on Amazon, you can buy ads for it only on Amazon, not Google.

“Once the platforms amassed huge numbers of users and online traffic, they could make their own rules,” a commentary in the official Economic Daily said. “The online users fought in vain in the beginning. Eventually they got used to it, just like a frog being slowly boiled alive.”

China’s internet companies have also become accustomed to turning to the government. Their data and networks help the government surveil the public. They follow the official censorship guidelines diligently and help the state media blare propaganda. They have become an integral part of the Communist Party’s social control machine. Tencent and Baidu declined to comment, and Alibaba did not respond to a request for comment.

With the government waving the antitrust baton, they could become even more servile.

Last week, Tencent announced a $US7.7 billion fund dedicated to what it called “sustainable social value innovations.” It would fund projects involving education, carbon neutrality and the revitalization of rural villages, many of which are pet topics of the party. Online, some commenters praised Tencent for its adroit politicking. One Weibo commenter quipped that Tencent was paying its antitrust fine in advance. 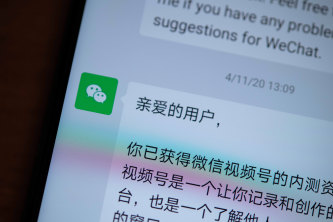 Alibaba used to be the most defiant in its dealings with the regulators, which once looked the other way as the e-commerce giant bullied its smaller competitors and vendors. As late as November 2019, an Alibaba executive defended its exclusionary practices in a meeting with the antitrust regulator. “There are always some competitors who speculate maliciously about the exclusive cooperation business model,” she said.

Alibaba’s attitude now couldn’t be more different. After the regulator imposed the $US2.8 billion antitrust fine, the company said it “accepts the penalty with sincerity and will ensure our compliance with determination.” Ma has kept a low profile since October.

Still, talk is cheap, and the platforms have done little to show they are opening up. Tencent and Alibaba, for example, could start by allowing each other’s payment apps on their services. That would benefit consumers and show they are serious about following the law. That could also get the government off their backs.

But so far, none of these companies have announced substantial moves to correct anti-competitive practices. Instead, they are clashing and manoeuvering through the halls of power.

Yao Jingbo — founder and CEO of 58.com, a Craigslist type of service associated with Tencent that hosts hiring and housing ads — this month urged regulators to fine his biggest competitor the same way they fined Alibaba. Critics pounced, saying that 58.com prospered by buying up or merging with competition, and that it is no better than its rival.