One of history’s most dramatic instances of cutting carbon emissions was brought about not by OPEC oil embargoes or principled European diplomacy, but the fall of the Berlin Wall.

The 1989 collapse of the USSR and its model of breakneck, investment-led growth caused emissions from the former Soviet Union to fall by a quarter in five years. By 2000, emissions were barely more than half of their peak level in 1984 — and for all the volume of Russia’s fossil fuel exports, they’ve barely risen since. 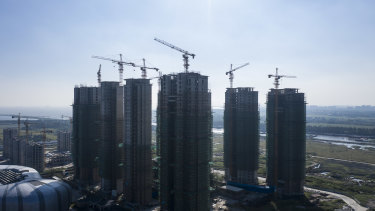 Unfinished Evergrande projects: The construction sector plays a similar macroeconomic role in China as bond markets do in developed countries.Credit:Bloomberg

The Soviet Union’s fate — accompanied by revolutions, wars, hyperinflation and chaos — is one that today’s communist leadership in Beijing is desperate to avoid. At the same time, officials would like to see a similar transformation take place in their own economy: away from the debt-fuelled construction spending that characterised late European communism and the past decade in China, and toward a more sustainable model, driven by consumers and mass prosperity.

The problem is how to get there without the instability that accompanied the fall of the eastern bloc.

China now accounts for nearly a third of the world’s emissions. Any hope of achieving President Xi Jinping’s target of peaking that pollution by 2030 — not to mention the ambitions to keep warming below two degrees Celsius — will be vain unless heavy industry is dethroned from its current role in the economy.

With domestic coal prices still well above the government’s target ranges after spiking to record levels last month, Beijing’s planners are using the energy crisis to push through regulation that reins in heavy emitters such as cement, metals, refining, chemicals and glass. Together, these sectors account for more than half of the country’s carbon footprint. Those goals are already being written into the long-term plans that guide China’s economy, with emissions from the cement and steel industries expected to peak by 2023 and 2025 respectively, and many coal-fired utilities also aiming for a 2025 peak.

China’s approach to decarbonisation has long resembled St Augustine’s approach to celibacy: ‘Lord, make me chaste, but not yet.’ Finally now, the nation will have to decide.

The country will “press ahead with industrial structure adjustment, and rein in the irrational development of energy-intensive and high-emissions projects,” Xi said in a written statement to the COP26 climate summit in Glasgow, which he didn’t attend. The question now is whether he’s prepared for quite how radical the needed change will be.

The construction sector plays a similar macro-economic role in China as bond markets do in developed countries. Just as rich nations’ central banks can tweak demand levels by buying and selling government securities, so too can China’s provincial governors curb or unleash their building companies to ensure growth targets stay on track.

Despite years of promises that the country would pivot away from this investment-heavy model of growth, it shows little sign of abating. The real estate sector rose from around 20 per cent of total fixed asset investment in the 2000s to nearly 30 per cent in 2019 before climbing further in 2020 under the pressure of COVID-19.

Even within the manufacturing sector, which comprised another 39 per cent of 2019’s fixed asset investment, the production of building materials is growing increasingly dominant. Metals, minerals such as cement and glass, and construction now comprise nearly a quarter of all factory spending.

All of this carries a heavy toll in terms of greenhouse pollution. One study last year estimated that the emissions used in construction were about 18 per cent of China’s total carbon footprint in 2015 — a volume of carbon dioxide comparable to that from all of Central and South America. That will only have accelerated since. Although China’s emissions increased about 6.7 per cent between 2015 and 2020, the floor space of buildings constructed this year is on track to be a third greater than it was in 2015.

Long before diplomats started gathering in Glasgow, it was apparent that this situation couldn’t go on. The struggles that China Evergrande Group has suffered in rolling over its $US300 billion in liabilities illustrate the way Beijing wants the free buffet in the construction sector to close down. Property giants are trying to sell billions of dollars more in assets to ease a cash squeeze.

Once again, though, the glimpse of a slowdown is causing expectations of a tap on the accelerator. Bond futures last week rose the most in two months on expectations that a round of policy easing could be coming. Infrastructure spending will pick up in the fourth quarter to counter the slowing economy, the state-run Economic Daily newspaper wrote in a commentary last Saturday.

With the five-yearly party Congress due in 2022 to confirm Xi’s mould-breaking third term as president, it’s hard to see the country heading toward a hard slowdown.

The problem for the world is that Xi’s ambitions on changing the shape of China’s economy are well-aligned with the planet’s needs to slow and reverse climate change, but they’re frustrated by the lack of an alternative growth model.

With each year that passes, that contradiction will grow sharper. China’s approach to decarbonisation has long resembled St Augustine’s approach to celibacy: “Lord, make me chaste, but not yet.” Finally now, the nation will have to decide.

David Fickling is a Bloomberg Opinion columnist covering commodities, as well as industrial and consumer companies.

Get weekday updates on the climate summit that will shape our future. Sign up to our COP26 newsletter here.