Federal Reserve Chair Jerome Powell on Thursday said the pace of recovery in the world's largest economy has moderated over the past few months and cautioned that the recent rise in coronavirus cases in the United States and around the world is "particularly concerning."

Powell said it was expected that the pace of the economic recovery would ease compared to May and June, given how deeply the economy was gutted earlier in the spring. But the virus continues to threaten households' ability to save, Powell said, one day after the number of new US infections topped 100,000 for the first time in a single day.

"We have been concerned that the downside risks are prevalent now, which are really the risk of further spread of the disease," Powell said at a press conference following the Fed's two-day policy meeting. 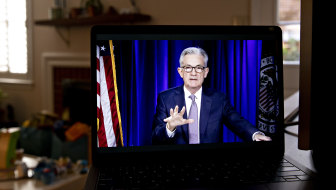 Jerome Powell during a virtual news conference after the Fed meeting concluded.Credit:Bloomberg

"What we see up to the present is really continued growth, continue expansion, but at a gradually moderating pace," he added.

This week, the central bank was not expected to address interest rates, which will remain near zero for the foreseeable future.

Powell said the country would have a stronger recovery with more fiscal aid.

Senate Majority Leader Mitch McConnell, a Republican from Kentucky, on Wednesday said a stimulus bill would be the priority when the Senate goes back into session next Monday and should be completed before the end of the year. McConnell said a deal could include state and local aid, which Democrats have long advocated for.

Powell has repeatedly called for more aid from Congress, particularly when it comes to getting direct relief to those in industries most affected by the pandemic, such as restaurants, retail and hospitality. Meanwhile, the Fed has come under increased pressure to widen the reach of its own emergency lending programs and to consider new ways it can fill the economy's lingering gaps.

Powell has cautioned that the recovery rests on getting the public health crisis under control, which would give people more confidence to resume their old routines and spending habits.

Case counts have been escalating. On Wednesday, the number of new US infections topped 100,000 for the first time in a single day, with cases mounting across the Midwest and Plains states.

Economists warn that the country is headed for a devastating winter, one that could be exacerbated by political gridlock in the wake of this week's election. Millions of Americans risk having their power and water shut off as unpaid utility bills come due. And without more federal action, protections for renters, out-of-work Americans and students borrowers will expire by the end of the year.

All of those factors have cast doubt on how quickly the economy will recover in the final stretch of 2020. By the end of the third quarter, the economy had recovered two-thirds of the ground it lost during the first half of the year. But much uncertainty remains.