Unlike many Election Days of the past, the weather across America will not, with a few small exceptions, affect the ability of people to vote. The amount of precipitation will be small. Temperatures will not be extremely different from normal for this time of year, although they will be slightly above normal in the central part of the country.

The only place significant rain is expected is where it rains most often in the Continental United States. Much of Washington state and northern Oregon will have modest precipitation. Also, there will be a trace of snow in parts of Maine and northern parts of New Hampshire and Vermont early in the day. (See the National Forecast map below.)

The temperatures will be in the 60s and 70s across much of the country, from Washington state and Oregon to Illinois and Indiana. The same temperatures will range from Idaho across the Canadian border to as far east as Wisconsin. It will be in the 60s and 70s through much of Texas and east through most of the Gulf states to north Florida, Georgia and the Carolinas, up into Virginia. (See the National Temperature map below.)

The weather will be in the 30s and 40s in parts of the Midwest, particularly northern Michigan. The temperatures will be in the 50s along the Atlantic Coast, from New Jersey to southern Maine, where they will dip into the 40s.

The only places the temperatures will be near freezing are across northern Vermont, New Hampshire and Maine.

The hottest places in the country will be inland in California, from the area northeast of San Francisco down to the area east of Los Angeles. The warmest spots in the country, where it will be in the 90s, run from southwest California into the western parts of Arizona. The traditionally hot portion of southern Florida will have temperatures in the 70s.

As for major cities and the areas around them: 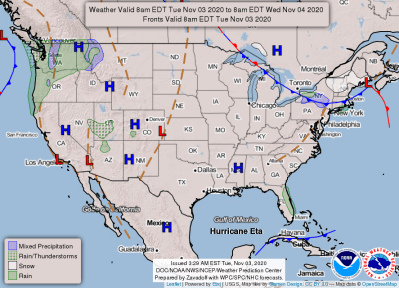 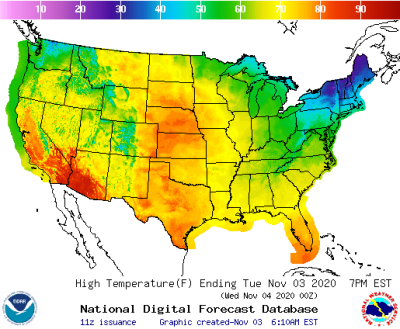