The owner of an antique jewelry store in Atlanta that was ransacked early Saturday morning in what's believed to be part of the protests of George Floyd’s death, fears demonstrators have gone too far in their attempt to get their message across.

Around 4:30 a.m., more than a dozen armed men broke into Estate Jeweler in Atlanta, according to general merchandise manager Leora Isakov.

The owners heard about the break-in from their alarm company, Isakov told FOX Business.

RIOT-RAVAGED RESTAURANT’S OVER STANDS BY PROTESTERS: ‘LET MY BUILDING BURN'

Once employees arrived at the scene, Isakov said: “We walked into a huge mess, shattered glass everywhere … The showcases were all broken. A lot of merchandise was taken. [It was] very devastating.”

“We took a look at the footage, the camera footage and we watched them break the glass with a cinderblock,” she added. “There were 14 masked, armed men walking into the store, filling up their pockets with everything they could and then leaving.”

TARGET CEO RESPONDS TO MINNEAPOLIS PROTESTS: ‘WE ARE A COMMUNITY IN PAIN’

Similar scenarios have unfolded across the country after Floyd's death, with violent protests that started in Minneapolis and spread as far as New York and Atlanta. A black man, Floyd died while being arrested earlier this week by a white officer who has since been charged with murder.

Many retailers, including Target and CVS have closed their stores to keep employees and customers safe. Isakov's small business, for its part, is at a loss as to what to do next. Isakov said the shop gave a report to police, but she knows officers are overwhelmed with calls around the city. 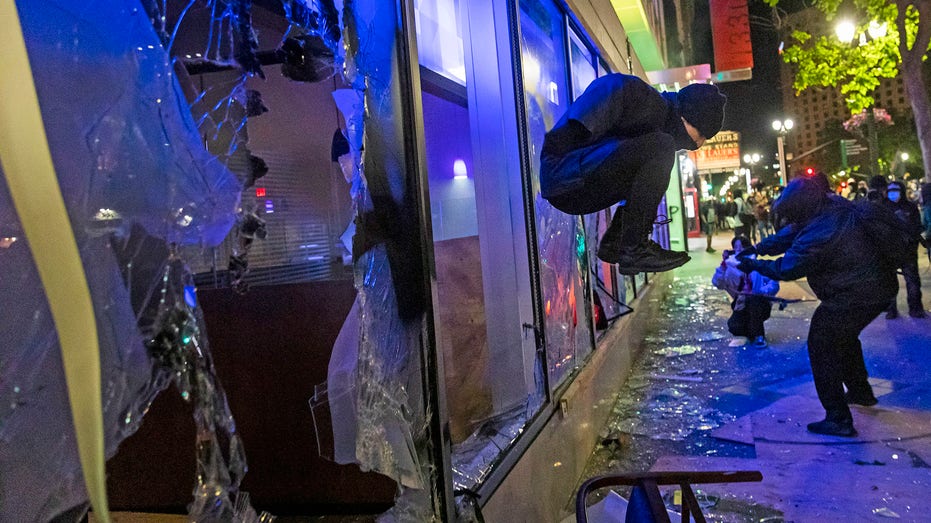 “We really don’t know what to do right now, just take every precaution we can, try to stay safe,” Isakov said. “Definitely heartbreaking and, you know, it’s upsetting.”

“We know everything that’s been going on right now with the George Floyd case and … our hearts go out to the family,” she added.

That doesn’t mean, however, that burglary is the way for demonstrators to be heard, she said.

“This is absolutely not something that would create a space to have somebody sympathize for you,” she said. “I think it’s going to head in a completely different direction.”

"This is not the legacy of civil rights in America," Bottoms said, urging rioters to go home and end the violence. "This is chaos, and we are buying into it. This won't change anything. We're no longer talking about the murder of an innocent man. We're talking about how you're burning police cars on the streets of Atlanta."

Killer Mike, the rapper whose real name is Michael Render, spoke shortly after the mayor, telling protestors they could accomplish more good by showing up at polling places in November than causing havoc in the streets now.

"I am mad as hell" about Floyd's death, he said. But, "it is your duty not to burn your own house down for anger with an enemy. Now is the time to plot, plan, strategize, organize and mobilize. It is time to beat up prosecutors you don't like at the voting booth."