For a brief period at the end of 2017, hundreds of thousands of cryptocurrency investors – myself (embarrassingly) included – became obsessed with breeding digital cats.

Known as CryptoKitties, users could purchase avatars of cats on the blockchain, each with various traits and qualities. Those cats could then be sold again or bred with others, with users hoping to luck upon one of the rare characteristics worth big bucks. 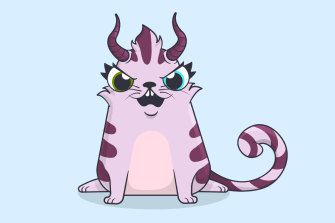 An example of a CryptoKitty with some rare traits.

It was immensely popular, so much so that it seriously congested the Ethereum blockchain network.

Some cats were sold for more than $100,000. All in all, the CryptoKitty craze lasted about six months. However, it served an important purpose as one of the first examples of widespread use of non-fungible tokens (NFTs) – unique, blockchain-enabled digital assets (often artwork) that can be bought and sold like other collectibles.

At the time, no one was being sold on any other premise than simply breeding cute cats. No one was starting a CryptoKitty restaurant in California. Paris Hilton wasn’t promoting rare cats on The Tonight Show. No exclusive parties were being held for the top 100 cat breeders.

CryptoKitties was basically gambling: a roll of the dice to see if you’d be lucky enough to get a fancy looking critter. There were no notions of it being anything more.

If only the spruikers of today’s NFTs were so honest.

The market for NFTs is huge: worth upwards of $15 billion at some estimates, with millions of dollars of digital art changing hands daily. Much of this is thanks to the industry’s “premier” projects, such as Bored Apes, which are worth up to $200,000, CryptoPunks and Moonbirds.

Most of these projects come with a promise of an experience beyond simply buying a unique piece of art. For example, Bored Apes holders are admitted to special clubs and communities, given first access to other NFT projects, or promised entry to ambitious metaverse projects.

On one hand, these promises are admirable and understandable. If you bought equity in a company, wouldn’t you be worried if it never innovated or updated investors on its performance?

However, on the other hand, the vast majority of NFT projects over-promise and under-deliver. For example, a project called Players Only founded last year by former NBA players raised $US1.4 million ($2 million) by promising NFT owners autographed merchandise and meetings with the players.

Six months later, the project was shuttered, with users alleging they had never received any signed merchandise and players had not shown up to meetings.

These stories are strewn across the NFT space. Creators raise millions of dollars on promises their project will be the “next big thing”, buyers believe them and are left holding the bag when the creators fail to deliver. It’s easy to see why so many people take a rightfully dim view of NFTs.

Advocates say the industry is in its infancy and finding its footing. They promise the technology behind NFTs will be invaluable in our increasingly digital future, and that soon everyone will be linking their various online assets to the blockchain. Whether this is true remains to be seen, and should be viewed with scepticism.

Meanwhile, NFT purveyors should take a leaf from the Book of CryptoKitty, and stop pretending it is anything more than a speculative asset for punters to gamble on.