It reportedly took oil workers more than three hours to shut down the pipeline that spilled as many as 144,000 gallons of crude oil off the coast of Huntington Beach, California over the weekend.

The source of the leak was finally identified on Tuesday and the City of Huntington Beach explained in an update that a 13-inch gash was found in the 16-inch concrete-encased pipeline, which had been displaced by 105 feet.

SHIP ANCHOR INDICATED AS POSSIBLE CAUSE OF CALIFORNIA OIL SPILL

Unified Command said that approximately 4,788 gallons of oil have been recovered from the water and the city wrote that a total of seven aircraft, 11 boats and 320 people had been supporting clean-up efforts along the Orange County coast, with a total of 1,500 people expected by the end of the week.

While Houston-based Amplify Energy Corp., the company operating three offshore platforms and the pipeline, said it had reported the leak immediately, The Orange County Register reported on Tuesday that federal regulators had found in a preliminary review that workers with the company's subsidiary Beta Offshore had gotten an alert about low pressure in a pipeline connecting its oil rig to the shore Saturday morning – hours before the company notified public officials.

The investigators for the U.S. Department of Transportation Pipeline and Hazardous Materials Safety Administration (PHMSA) wrote in a letter to Amplify Energy Corp. CEO Martyn Willsher that the workers had "received a low-pressure alarm on the San Pedro Bay Pipeline, indicating a possible failure," at around 2:30 a.m. PDT on Saturday. 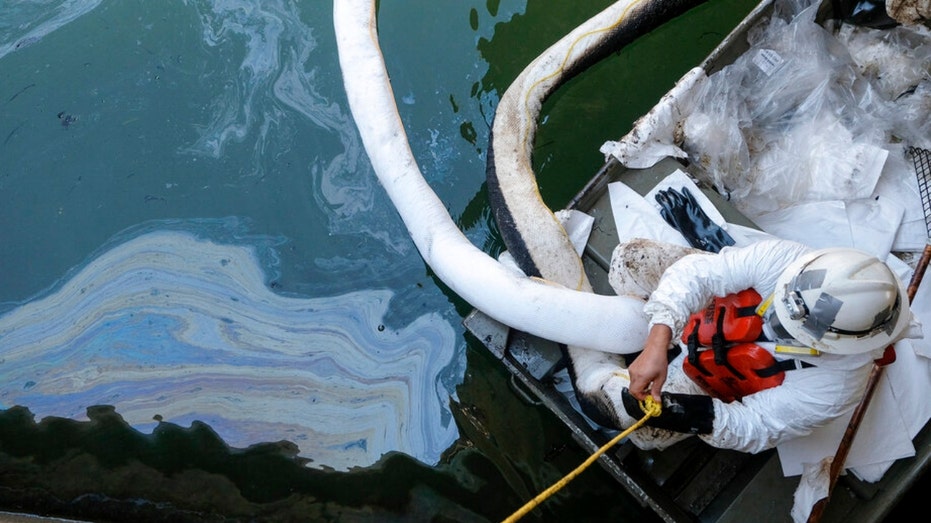 Workers in protective suits clean oil in an inlet leading to the Wetlands Talbert Marsh after an oil spill in Huntington Beach, Calif., on Tuesday, Oct. 5, 2021. A major oil spill off the coast of Southern California fouled popular beaches and killed (AP Photo/Ringo H.W. Chiu)

Some reports of a possible spill, a petroleum smell and a sheen on nearby waters off came in on Friday night but were not corroborated.

While the cause of the pipeline break remains under scrutiny, officials said early findings indicate that a ship's anchor may have caught the line and dragged it across the seafloor.

Beta Offshore reported that the pipeline was shut down at approximately 6:01 a.m. PDT, investigators said, finding that Beta Offshore only reported the accident to the U.S. Coast Guard's National Response Center (NRC) more than six hours after the initial alarm at 9:07 a.m. PDT.

The Orange County Register notes that investigators did not provide a reason for why it took workers on the rig so long to shut off the pipeline and whether the delay led more barrels of oil to be released into the water.

Additionally, the timeline of events provided by the Pipeline and Hazardous Materials Safety Administration is contradictory to earlier comments by Willsher, who had told reporters on Tuesday that Amiply Energy found out about the leak at 8:09 a.m. PDT.

A state report had previously shown that Witt O’Brien’s, a crisis and emergency management firm contracted with Amplify to handle parts of its spill response, alerted the NRC at 8:55 a.m. PDT.

The PHMSA said that the Coast Guard had submitted a second NRC report at 1:41 PDT and a third report at 2:20 PDT.

The agency ordered Amplify Energy to shut down the pipeline and hand over any records related to its performance, in addition to reviewing why it had taken so long to apprise public agencies about the situation. 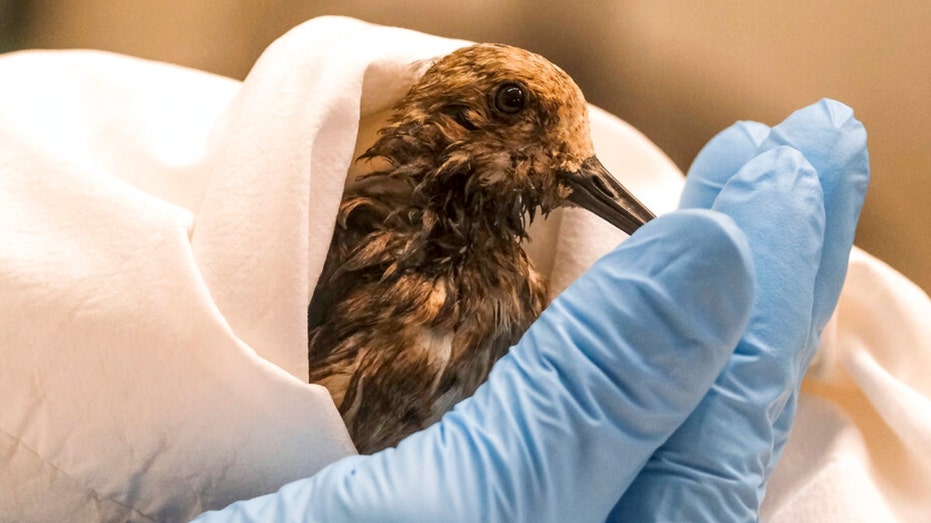 Companies are required to immediately report when they believe they've detected an oil spill and Amplify Energy's spill-response plan calls for the immediate notification of a spill.

Criminal charges were previously brought when a company took too long to notify federal and state officials of a spill.

In addition, issues with faulty leak detection procedures have plagued the industry and while new leak detection and valve rules were crafted under former President Barack Obama, they were never finalized.

A rule proposed under former President Donald Trump would mandate more valves for only new or replaced oil pipelines – a change with came after oil industry lobbying groups, like the American Petroleum Institute, said retrofitting lines with valves would cost up to $1.5 million per device.

There are 1,200 active wells and 19 oil and gas agreements in California’s coastal waters. 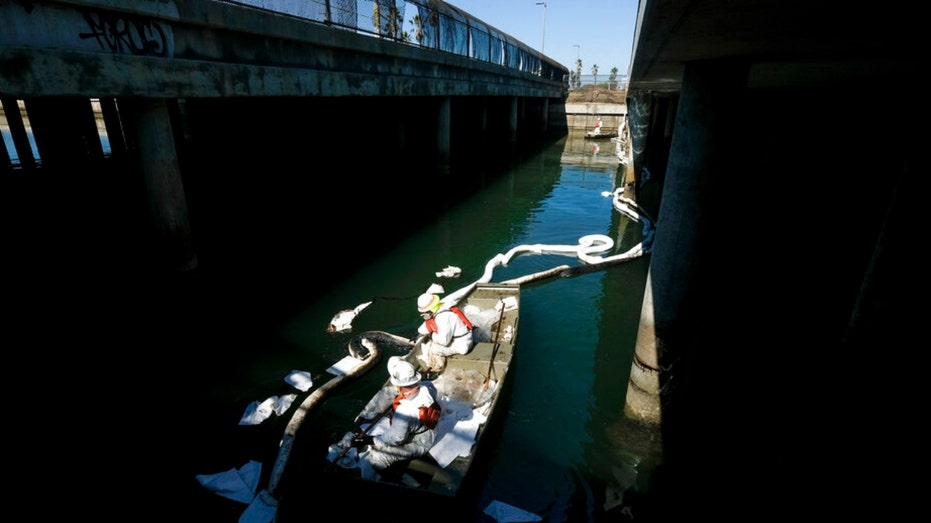 Workers in protective suits clean oil in an inlet leading to the Wetlands Talbert Marsh after an oil spill in Huntington Beach, Calif., on Tuesday, Oct. 5, 2021.  (AP Photo/Ringo H.W. Chiu)

In federal waters, there are 23 oil and gas production facilities off the Golden State's coast.

Speaking at a press conference on Tuesday, Democratic Gov. Gavin Newsom called on the U.S. to curb oil production.

"It’s time, once and for all, to disabuse ourselves that this has to be part of our future. This is part of our past," he said.

In 2020, Newsom signed an executive order banning the sale of new gas-powered vehicles by 2035.