Toru Hashimoto ran a cafe he hoped almost nobody could find.

His tiny hideaway is a nostalgic repository for objects he kept during his decade as an engineer at Nintendo in the 1980s and ’90s: the original score for the Mario theme song, jerseys from the company baseball team, a rare factory cartridge label for the Japanese version of Super Mario Bros.

To Hashimoto, the Tokyo cafe was an extension of his living room, where he had once kept the memorabilia. He allowed in only his former industry colleagues and their friends, and he tried hard to keep its address a secret. But he also scattered obscure clues about its location on Facebook, such as the number of steps needed to get there from a certain landmark, and obsessives followed them, hoping to find a way in. 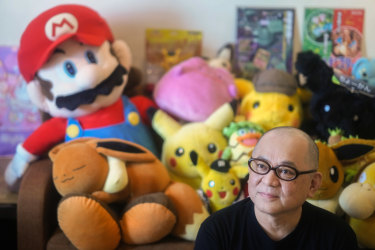 Toru Hashimoto’s cafe is a nostalgic repository for objects he kept during his decade as an engineer at Nintendo.Credit:Chang W. Lee/The New York Times

“In games, you have to find the capital or find where your enemies are hiding,” he said. “So it’s not like you can just walk straight to your destination.”

Now, though, the mystery is over. Like many other small-business owners who have taken drastic steps to survive during the pandemic, Hashimoto felt obliged to open his cafe to anyone with a reservation starting this summer. He is hoping to alleviate the financial strain as a coronavirus state of emergency in Tokyo has kept some customers home.

“I am shouldering debt, and we are barely getting by, treading water,” he said.

Hashimoto opened the cafe in 2015. He named it 84, after the final round of the Super Mario Bros. game — World 8, Level 4 — and the year he started working for Nintendo. (Pronounced “hashi,” it is also an abbreviation of his last name and the Japanese word for “chopsticks” and “bridge.“)

He joined Nintendo a year after the company, which had previously been known for designing card games, introduced the Nintendo Entertainment System, its first video game console. He learned engineering from scratch there and spent most of his time debugging games before they went to market. In 1996, he moved to a small consulting company that advised developers on how to design games to be more fun.

His cafe, like other Japanese establishments devoted to niche interests, from trains to murder mysteries to stationery, is small, seating only five tables, and open only on weekends. Customers can book a 90-minute slot, which costs 8,400 yen ($103). Those making reservations are given the address if they promise not to disclose it.

The cafe is not, as Hashimoto is careful to note, a place to actually play video games. In recent years, video game bars in Japan have been raided over copyright disputes with manufacturers. The country’s once omnipresent arcades have also faded in popularity, a demise hastened by Japan’s worsening economy and the pandemic. 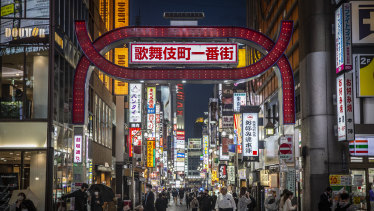 The Japanese economy has been crippled by the pandemic. Credit:Yuichi Yamazaki/Getty Images)

But from their first step inside, the cafe’s customers are immersed in a loving tribute to the video game world. The door opens to a jingle from The Legend of Zelda that signals to players that they have reached their destination. A Nintendo console is wired to the ceiling, surrounded by candy-colored cartridge slots. A TV plays old video game commercials on a loop. An army of plush video game characters and creatures presides over a couch.

On the walls are autographed sketches of Pokémon, Zelda and Dragon Quest characters by the games’ creators and developers.

“Before the opening of the cafe, all of this was in my living room,” Hashimoto said. “So the concept of this cafe is also ‘Welcome to my humble home.’ ”

He told friends to drop by for beers and stayed open until 3 am. He would miss the last train, forcing him to rent a hotel room down the street. He now has an apartment nearby, where he keeps “all the junk” that he did not include in the cafe.

He catered only to acquaintances and their friends in part because of what he called “shyness.” “I wasn’t sure I could serve a whole bunch of strangers, so I wanted to start with people I already knew,” he said.

The cafe stopped serving hot food after Hashimoto, who was reluctant to work with people he did not know, struggled to find a replacement for its cook. It now serves only drinks and a basketful of retro candy-store snacks. And when Hashimoto needed another waiter, he befriended a cashier at the convenience store downstairs — she looked miserable, he said — and eventually hired her.

Hisakazu Hirabayashi, a video game consultant and regular at 84, said he had enjoyed meeting others in Hashimoto’s inner circle when the cafe accepted only members and their friends.

“People in the gaming industry can be socially awkward, and they like to speak in their own gaming lingo,” he said. “And 84 was just the place to do that with new people. Hashimoto is great at introducing people to each other; he networks for you just by being there.” 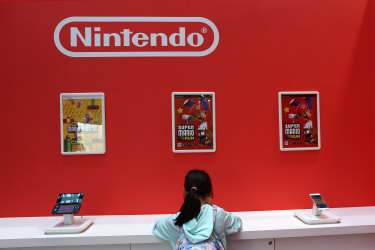 Hashimoto spent decade as an engineer at Nintendo in the 1980s and 1990s.Credit:Bloomberg

Others embraced the inclusivity. Eishi Ozeki, 46, a manga artist who said he made the hour-long journey from his home to the cafe up to three times a month, welcomed the decision to open it to the public.

“The new system is great for clients from abroad, or people like me, who so badly wanted to come to the cafe but couldn’t due to a lack of connections,” he said.

Finding a way to get into 84 had become a point of obsession for Ozeki, who kept pestering an acquaintance who, he thought, might know its location. He later created a manga about a girl who regularly visited the cafe in order to break into the video game industry.

As he opens to a wider circle, Hashimoto hopes that video games will be just a starting point for deeper discussions.

“People don’t come in and ask each other, ‘How do you get to that final stage of Mario Bros.?’ ” he said. “We talk about life, we talk about career progression for the younger folks. That’s the conversation that happens here.”

He told of a chance encounter between a woman interested in developing video games and Yuji Horii, creator of Dragon Quest.

“He signed her passport and said, ‘This is your good luck charm,’ ” Hashimoto said, referring to the cafe’s stamp book for customer visits. “This is what I want to do with this cafe. And I told her, ‘One day when you create your own video game, bring it here for us to see.’ ”