In the dark of night on March 4, Italian police in the Ligurian port of Imperia encircled a 215-foot superyacht belonging to Russia’s fourth-richest person, Alexey Mordashov.

The European Union had sanctioned the billionaire on February 28, days after Russia’s invasion of Ukraine. His extensive holdings in Europe — including “Lady M,” with its swimming pool and beauty salon — were seemingly frozen by authorities. 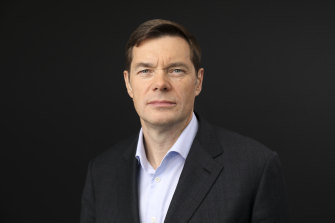 Mordashov, however, had already made moves of his own.

The same day the steel tycoon was sanctioned, he shifted control of a roughly $US1.1 billion ($1.5 billion) stake in London-based mining company Nordgold to his wife, Marina Mordashova. He also moved a chunk of his $US1.7 billion stake in holiday tour-business TUI AG from a Cyprus holding company to one incorporated in the British Virgin Islands.

As lawmakers worldwide ratchet up pressure on some of Russia’s elite as a way to pressure President Vladimir Putin, they’ve often pointed to blocked superyachts, luxury real estate and sports clubs as signs their efforts are working.

But the truth is murkier — revealed in arcane corporate filings that can take days before becoming public. They show Russian billionaires shifting ownership stakes, ditching board roles and giving up control, all part of a race to get ahead of officials in the US, UK and EU and restructure their assets while they still can.

One example is Mikhail Fridman, who was sanctioned by the EU alongside Mordashov and his business partner Petr Aven. Filings show he ceded control two days later of at least three companies in the U.K., where he’s not sanctioned. He transferred those shares to a former employee at LetterOne, the investment firm he co-founded.

The list goes on — and includes those subject to a new round of EU sanctions this week.

Vadim Moshkovich cut his stake in agricultural conglomerate Ros Agro to below 50 per cent before the sanctions hit. Andrey Melnichenko withdrew as a beneficiary of his roughly $US17 billion stake in fertiliser producer EuroChem and thermal coal supplier Suek effective March 9 — the day he and others were sanctioned.

“They might be thinking, I’m going to take my daughter, my wife, my employee or employees, and I’m going to put this stuff in other names. It’s going to show up and it’s going to be documented that I’m not the majority owner.”

That didn’t stop Italian authorities from seizing Melnichenko’s $US580 million-euro superyacht in Trieste, Italy. There is no justification for Melnichenko to be on an EU sanctions list, and he will be challenging the measures, a spokesman for Melnichenko said in an email Saturday after the seizure was announced.

Sanctions require compliance from industries, and companies have to quickly dig through corporate ownership layers to find, freeze and report relevant accounts. In the US, they share findings with the Office of Foreign Assets Control, or OFAC.

It may take time for financial institutions to identify associated accounts of a sanctioned individual that aren’t already widely known, said Howard Mendelsohn, chief client officer at Kharon, which uses technology and experts to construct the network of relationships around sanctioned parties.

Someone who is sanctioned can use that as a window to hire lawyers, consider ownership changes and otherwise move assets around, he said.

“They might be thinking, ‘I might have a little time here before anyone figures out what all my companies are, especially those that are majority-owned,‘” Mendelsohn said. “I’m going to shuffle. I’m going to take my daughter, my wife, my employee or employees, and I’m going to put this stuff in other names. It’s going to show up and it’s going to be documented that I’m not the majority owner.”

In the US, there’s a clear incentive to drop majority control: OFAC’s so-called 50 per cent rule.

It states that property or interests owned by sanctioned individuals must be blocked if people named on the government’s list have a 50 per cent or greater aggregate stake. That makes divesting shares a popular manoeuvre to get under that threshold.

The US Treasury has the power to name and sanction spouses or adult children of sanctioned individuals under a 2021 executive order. 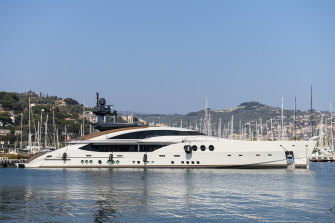 It’s not the first time Russian tycoons have resorted to shuffling assets. Oil mogul Gennady Timchenko sold an almost 50 per cent stake in a Finnish petroleum distributor days before being sanctioned following Russia’s annexation of Crimea in 2014.

Oleg Deripaska was sanctioned by the US in 2018. To ensure aluminum company En+ Group International PJSC’s was removed from OFAC’s list, he shrunk his stake to 45 per cent from 70 per cent through a complex array of transactions involving a share tender to a state-owned bank, stock transfers and charitable donations.

OFAC lifted sanctions on En+, citing that the majority of board directors were independent.

“When you’re talking about, say, a Russian oligarch, if Oleg Deripaska still has a 33 per cent voting stake, would you vote against him?” said Eric Sohn, director at Dow Jones Risk & Compliance.

Transactions have multiplied in recent days as Russia’s richest sense a closing window. For some, it may be too late.

Roman Abramovich, the billionaire owner of Chelsea Football Club, said on March 2 that the storied sports franchise was up for sale. Yet a week later, the UK sanctioned him and six other Russians, leaving the team in limbo.

As for Mordashov, the major shareholder of one of Russia’s biggest steelmakers, he’s called the Ukraine conflict “a tragedy” and said he doesn’t understand why the EU imposed sanctions on him.

A spokesperson for Mordashov confirmed the recent share transfers, declining to comment further. He’s worth $US19.6 billion, according to the Bloomberg Billionaires Index.

Russia’s ultra-wealthy have lost more than $US90 billion in the fallout from the Ukraine invasion. With no letup in sight, wealthy and connected Russians are likely trying to protect and shield their interests as authorities’ targets get broader, Kharon’s Mendelsohn said.

“If they’re not listed now, they’re definitely anxious,” he said.