There’s never been much point in lecturing President Xi Jinping’s China on how it should manage its own affairs. The regime seems impervious to international criticism, and will do pretty much what it pleases. Western condemnation of abuses in Xinjiang and Hong Kong is like water off a duck’s back; it only further strengthens Chinese resolve.

So it was with the G7 statement at the weekend urging China to “respect human rights and fundamental freedoms”. This drew a predictably dismissive response. “Stop slandering China, stop interfering in China’s internal affairs and stop harming China’s interests,” a Xi spokesman said. Nice. Yet if there is little or nothing the West can do about Chinese abuse within its own borders, there is very much something that can be done about the regime’s growing influence abroad. Whether it is capable of acting remains, regrettably, an open question. 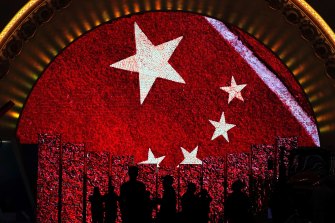 Old divisions on China seemed largely to disappear at the latest G7 in Cornwall, but there is still no definite strategy to control its growing influence.Credit:AP

G7 summits tend to be vacuous affairs that decide little of substance – more so than ever when Donald Trump, deeply suspicious of almost any form of multilateralism, was US president. Yet it is fairly obvious that in order to properly counter China, Western democracies must act together in a grand alliance of values and actions. Divide and rule has been the Chinese approach to date, and it plainly works; it has proved virtually impossible to build a united front against China. The US has long been the most hawkish of the G7, and Italy, which has signed up to a number of Chinese Belt and Road initiatives, the most dovish.

Careful not to jeopardise the glittering promise of Chinese markets, Germany too sits at the dovish end of the spectrum. Boris Johnson, meanwhile, wants to have his cake and eat it. He had to be dragged kicking and screaming into banning Huawei from Britain’s 5G rollout, and is most reluctant to take sides.

All that might be about to change. Old divisions on China seemed largely to disappear at the latest G7 in Cornwall. The final communique was much more hardline than anything seen before. It also references the establishment of a taskforce to explore Western alternatives to China’s Belt and Road. Headed by British officials, the taskforce is required to report by the northern hemisphere autumn, which by G7 standards is a vanishingly short timescale. There is a sense of urgency about things that we haven’t seen before.

New-found G7 enthusiasm for countering China in the developing world draws together two of the defining policy goals of the age. One is the environmental objective of shifting the world on to carbon-neutral forms of energy. The other is the struggle for dominance in values and systems of governance.

A credible Western alternative to Belt and Road would neatly encapsulate both these goals. It also addresses a wider problem – that if we deny the developing world a viable pathway to prosperity, then the migration challenge we see today will be but a flea bite compared to what’s to come.

It has taken the West a shockingly long time to realise these things, allowing China to steal a march in the battle for hearts and minds. But better late than never.

Some Western leaders once hoped it might eventually be possible to hijack Belt and Road and make it their own, with access to Western capital made dependent on the application of Western standards of labour protection, transparency, accountability and rule of law. But with worsening relations, this has seemed unrealistic for some time now. As on much else, it won’t be collaboration, but competing visions of the future, that drives things forward.

The Chinese leadership likes to believe that the twin meltdowns, first of the financial crisis and then the pandemic, have proved both their own economic order and system of governance superior on multiple fronts to the West.

The G7 communique provides a useful list of key principles to guide the Western approach. Above all, it must be values driven, with infrastructure development carried out in a financially, environmentally, and socially sustainable manner, and it must also be market led, with private capital and expertise at its core.

Only one problem – delivery. A recent report by the International Energy Agency found that annual clean energy investment in emerging and developing economies needs to increase by more than seven times – from less than $US150 billion ($195 billion) last year to over $US1 trillion by 2030 – to put the world on track to reach net-zero emissions by 2050.

There is, moreover, a very obvious reason why the money isn’t already flowing. The definition of an emerging market, it used to be said, is one from which it is impossible to emerge with your capital intact. Rampant corruption and poor standards of governance make the cost of capital in the developing world roughly seven times more expensive than it is here in the West. Very little progress is going to be made until those standards are improved.

China’s state-controlled form of capital allocation has proved less choosy than market-based, private Western capital, though it should be noted that China is facing a growing list of defaults on its Belt and Road investments. The developing world is fast finding out that it often doesn’t pay to dance with the Chinese dragon.

There is no shortage of money in the West to finance the world’s clean energy transition; the challenge is rather persuading it to invest. The G7 has come up with the bare bones of a plan, but there is very little sign yet of the muscle needed to make it functional.

Persuading private capital to invest will require not just a revolution in standards across the developing world, it will also very probably have to involve a relatively high degree of co-investment by Western governments. That may prove a problem for governments seeking to rebuild public balance sheets severely damaged by Covid.

Yet the intention is there. The Chinese leadership likes to believe that the twin meltdowns, first of the financial crisis and then the pandemic, have proved both their own economic order and system of governance superior on multiple fronts to the West. Unarguably, they coped with both crises better. But the fightback has begun; the shape of things to come is by no means already established.