In Tuesday night’s budget, it will be important to note its assumptions about when our international borders will be back to functioning normally. Not because they’re sure to be right, but because our borders will have a big impact on Scott Morrison’s new strategy of getting unemployment down to get wages – and thus living standards – up.

As the Commonwealth Bank’s Gareth Aird has reminded us, fancy calculations about how low unemployment has to fall before labour shortages force employers to bid up wages, rest on the (usually reasonable) assumption that our borders will be working the way they always have. 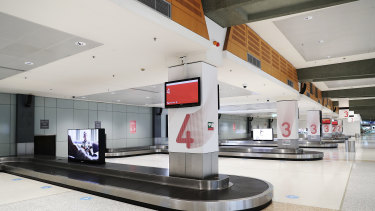 The day our borders return to normal may be a lot further into the future than we’d first hoped.Credit:Getty

If our borders are temporarily closed to immigration and overseas students, however, the point where skill shortages emerge may arrive a lot earlier than the fancy calculations suggest. What’s more, it’s become clearer that the day where our border conditions return to normal may be a lot further into the future than we’d first hoped.

It will be interesting to search the budget papers for signs that these complications don’t come as news to the economic managers, but have been built into the new strategy’s design.

The point is that over the decades of what we used optimistically to call “micro-economic reform”, our employers have become used to the idea that finding enough skilled labour – or even unskilled people willing to do the crappy, badly paid jobs that most Australians aren’t, fruit-picking for instance – isn’t something you have to worry much about.

Whenever you look like running out of the workers you need, you just bring someone in on a temporary visa. If they turn out okay, you help them move to a permanent visa. Our immigration program used to be about recruiting factory fodder for the manufacturers, now it’s about people on many classes of temporary visas allowing employers instant access to skilled workers trained by someone else at some other country’s taxpayers’ expense.

The trouble with this is that it’s come at the expense of our technical education system and our young people. Our business people no longer need to worry about whether they’ll have enough skilled workers a few years down the track, so no longer put enough money and effort into training apprentices, trainees and other technical workers.

I see it as further evidence for my theory that part of the reason both productivity improvement and wages have been weak for some years is our businesses’ preference for improving their profits by cutting costs – particularly wage costs – rather than improving their efficiency.

One implication of this emphasis on employers buying skilled (or cheap) labour off the shelf, so to speak, is that the longer the economy recovers behind closed borders, and the more the government tries to use labour shortages to get some decent wage growth, the more pressure employers and their lobby groups will put on the government to open the temporary-visa floodgates.

The more the government gives in to its business mates – who are used to getting their way – the more it will sabotage its strategy for getting wages, consumer spending and the voters’ standard of living going up not sideways.

But Dr Mike Keating, a former top econocrat, argues there’s a different weakness in the new strategy: it continues the economic managers’ earlier error of analysing the wages problem in purely cyclical terms.

For seven years they told us not to worry about weak wage growth because the recovery from the global financial crisis was just taking longer than usual. Wrong. Now they’re saying the problem is too much slack in the labour market, so we must stimulate harder to reduce the rate of labour underutilisation (unemployment plus under-employment) and, once we have, healthy wage growth will return as sure as demand and supply go together.

This thinking fails to acknowledge the likelihood that the problem is more structural than cyclical. It’s not just weak demand that’s the problem, it’s a change in the structure of the labour force, particularly as skill-biased technological change has increased employers’ demand for high-skilled labour and dramatically reduced demand for semi-skilled labour, while not having as much effect on demand for services performing less-skilled labour.

Even so, the notion that much unemployment is the result of “structural mismatch” rather than weak demand is hardly new. That is, many of the unemployed lack the particular skills employers are looking for. So it’s wrong to assume that unemployment falls in lock-step with rising demand.

We’ve been marvelling at the recent rapid increase in job vacancies, which has reduced the number of unemployed per vacancy to 2.75, well below its decade average of 3.9. Many have taken this as indicating the strength of the recovery and a sign that unemployment will continue its rapid fall.

‘[The] pursuit of the target rate of unemployment may well result in an increase in wage inequality, which in turn may not produce the increase in demand that economic recovery requires.’

But Keating, a labour economist, says it indicates “a substantial and increasing degree of structural mismatch in the labour market”. (It could also be a sign that our employers’ dependence on importing the skilled labour they need is already making itself felt.)

I think the econocrats need to remember that, in the old days, the tendency for wage rises caused by skill shortages in some occupations – or some parts of the country – to spread to all other workers was caused by the operation of the old centralised wage-fixing system. The move to enterprise bargaining was intended to stop that happening. And it has.

These days, the labour market’s only equalising tendency comes from the existence of the more amorphous “wage norms” (“other bosses are giving pay rises of X per cent, so I’ll do the same”).

Keating says the best way to remove structural impediments in the labour market is to ensure the necessary development of education and training so that people have the particular skills needed to meet the requirements for the jobs that are available.

But that, of course, is just what we haven’t been doing.

Ross Gittins is the economics editor.