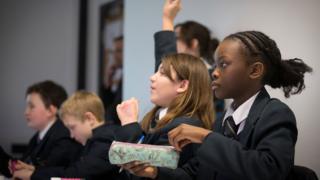 What is happening with the great majority of children who are missing out on school in England?

That’s not a random question – and, more puzzlingly, it’s not one with an answer – because at the moment no-one really knows.

Some parents might see their children learning from a dazzlingly digital, interactive version of the school day, while others will see their children putting in a long hard day on Netflix, with their schoolwork a fast-receding memory.

There is no consistent approach or anyone even monitoring what’s offered for the more than 90% of pupils who are not back in school.

Disquiet about that is rising, not least among parents considering the time lost before important exams.

It feels as though the changed world of Covid-19 has become semi-permanent, but the approach for schools seems stuck in the makeshift approaches of the first lockdown days in March.

That worked for a while – an online academy was rapidly put together, laptops were promised for the disadvantaged and teachers put in long hours and worked through their holidays to teach pupils online and keep schools open for key workers.

But speaking privately, school leaders say they felt excluded from big decisions, such as how schools would begin to return.

The date 1 June had been in discussion for many weeks for a phased return, but when it was also announced that all primary years would return by the end of term, many head teachers immediately warned that with social distancing that it was never going to happen.

It felt as though political announcements and the realities of classroom capacity had parted ways – and things began to drift.

Instead of taking common ownership of a shared plan, teachers’ and head teachers’ union leaders found themselves uncertain whether there even was a plan.

The ditching of proposals to bring back all primary children this week suddenly cast a hard cold light on how long most pupils would be out of school.

The government has been performing its own balancing act – on the one hand accused by teachers’ unions of risking safety by going back to school too soon, while also being under pressure from some parents and employers for not going back quickly enough.

Next week it will try to extricate itself with a promise of summer clubs and catch-up classes. But no matter how big the back of the envelope on which these ideas will be written, it will still be about looking after and supporting children in a temporary way, and not regular lessons with their own teachers.

But the really big decision and the most difficult question for schools is what happens in September – will pupils be able to go back in any way that resembles a regular school day?

This is only 10 weeks away – less time than since the lockdown started – and there are already warnings that if schools are going to have any chance to get ready, decisions will have to be made very soon.

And many parents will be worried at the prospect of more temporary timetables and online lessons stretching over the horizon.

If the 2m social distance is still in place in September, perhaps only half of pupils could return at any one time, maybe not even that many.

The lack of space that derailed the return of primary classes would apply to secondary years too.

That would mean rotas and part-time lessons into the autumn, with all the disruption to learning and to parents wanting to get back to work.

Even if the 2m rule is lowered to 1m, some schools warn they will struggle to accommodate all their children.

There has been talk of taking over church halls and empty buildings close to schools – and it might work in some instances – but many would struggle with the safety issues of creating instant classrooms in nearby sites for hundreds of children each day.

A heads’ leader says it’s hard enough finding teachers in regular times, so how would they hire an entire parallel staff in a few weeks?

And that’s before the challenges of deciding what to do about A-levels and GCSEs when such a large chunk of the year has been missed.

A change on social distancing could make a difference to how many could be taught.

But schools are clamouring for a strategy, and one they can help to shape rather than hearing it announced on television, that would allow them to get ready for a return to school, in whatever form that now might take.

Parents brought home their children in March in a great moment of collective uncertainty. Three months later they need much clearer answers about what happens next.