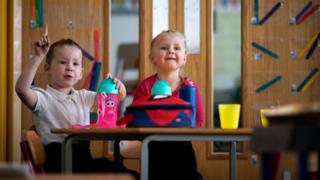 Here’s a practical maths conundrum, rather than a political question, about the plan to reopen schools in England.

And as a spoiler – the Department for Education says it will need to issue new guidance to sort it out.

The government announced that to keep children and teachers safe there should be no more than 15 pupils per class – so in effect, every class of 30 would have to be spread over two classrooms.

This might work for the phased return of the first few year groups. But the government is also aiming, if the safety advice permits, for all primary year groups to be back in school for a month before the end of term.

The complication is that if each class is occupying two or more classrooms, how could all the year groups be back full time at the same time? There wouldn’t be enough classrooms or teachers.

Geoff Barton, leader of the ASCL head teachers’ union, says the sums don’t add up: “It seems to us a non-starter.”

“It is impossible to reconcile this ambition with the current guidance about limiting class sizes to 15 and keeping groups in ‘bubbles’ to reduce mixing,” says Mr Barton.

It’s an example of how the plan to reopen schools is being road-tested against reality – before the final decision is taken, on or before 28 May, on whether to go ahead with reopening schools.

A Department for Education spokesman says new safety guidance will be provided if it’s decided all primary pupils are going back: “We’ll revisit the advice when the science indicates it is safe to invite more children back to schools and colleges.”

Primary schools are going to have to be adapted in many other ways.

They’re designed to be welcoming, family-friendly places, with lots of shared play areas. But now they will need a safety-first environment.

It’s goodbye to the soft toys and anything which might be hard to clean and might spread infection. Instead there will be marked out spaces, gaps between desks, one-way systems and a routine of frequent hand washing.

There’s a big encouragement on fresh air and ventilation – with the safety guidance urging outdoor classes where possible and doors and windows to be kept open.

Anything that can be touched will have to be frequently cleaned – light switches, books, tables, chairs, bannisters.

Bringing books or anything else between school and home is discouraged – and in school there shouldn’t be a sharing of pencil and paper, and libraries will be closed.

But it’s not about masks or social distancing – with the guidelines accepting that a two-metre exclusion zone is not realistic between young children.

Instead the safety guidance is based on keeping children in closed groups of no more than 15, which stay separate from the rest of the school, and so minimise the risk of spreading infection.

These small groups will have one teacher and will learn, play and eat separately, arriving and leaving school at a different time from other small groups of pupils – each group staying two metres apart from any other.

Steve Chalke, founder of the Oasis academy trust which runs 35 primary schools, says it is very hard to have a catch-all set of national guidelines – because every school will have different buildings and circumstances.

Access to outside spaces, the design and size of rooms, the layout of schools and corridors will be different. Every building will need a “bespoke plan”, he says.

Mr Chalke, who supports reopening schools, says the pressure on space from class sizes of 15 will mean that schools are likely to need rota systems, such as different classes having morning and afternoon shifts.

That might raise childcare questions for parents, if they have to work around part-time school timetables.

Mr Chalke says while there are political debates going on between the government and teachers’ unions, the key demographic to persuade over reopening schools will be parents.

He expects at first there might be relatively few arriving. “I’m guessing it’s going to be a trickle,” he says.

But he thinks if schools can show that schools are safe and children are glad to be back, the numbers will start increasing.

Schools were closed in a rush more than eight weeks ago – reopening them could prove a more complicated process.