University students have been telling the BBC how they were only told that most of their courses in the coming term will be taught online after paying hundreds of pounds for accommodation far from home.

Sara is a third year student from Leeds, studying international development at King’s College London, at a cost of £9,250 for the year. She says she was told her course would be completely online this term on 1 September – the day she began paying almost £3,000 for her accommodation.

Sara moved home to Leeds in March, at the start of lockdown, She says she has hardly had any lectures since February, when university staff went on strike.

In an email, seen by the BBC, she was then told “all teaching for final year students” will be online this term – including seminars and dissertation supervisions. In-person teaching in her second term “will depend on the Covid-19 situation closer to the time”.

It’s left her feeling short-changed. “If I knew that we were going to be online for the first semester I wouldn’t have got accommodation for this term at all,” Sara says.

She says she’s had little guidance about what campus life will look like and whether she will need to – or be able to – spend any time there.

“Do I need to be in London or not? Do I need to go in or not? There’s no point in [just] sitting in my house,” she says. “I do think there should be some kind of reduction with everything online. You still get an education but they should reduce the amount you’re paying.” 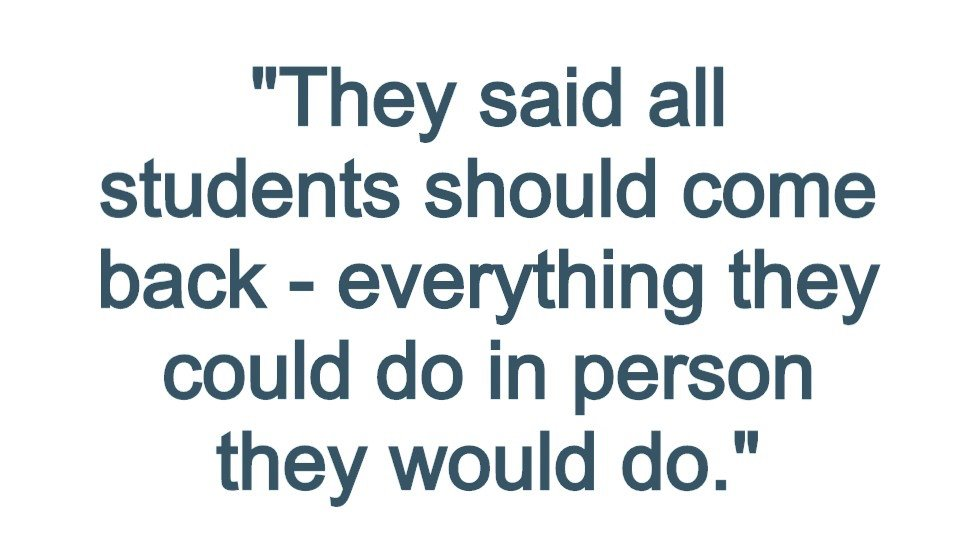 The University of St Andrews also announced at the end of August that some courses would be entirely online in the first seven weeks of term.

Many students moving into halls for their first year had already signed their contracts by the time the announcement was made, while many second and third year students in private accommodation signed contracts months ago.

Lottie, a third-year student in philosophy and history of art, says the university had initially encouraged students to return to the town.

“In June or July, they said that all students should plan to come back to St Andrews at the start of term and it would be dual teaching – everything they could do in person they would do, with the rest online.

“They did say they would give people the option to study completely online from home, but when you applied to do that you needed to have a specific reason.”

Rhiannon, another student at St Andrews studying international relations, is paying £525 a month for a room in a shared house.

“Our house has been empty since March. I would have stayed at home, and cancelled my rental contract. I actually tried to negotiate with my landlord in June because of the uncertainty and the landlord was completely inflexible.”

The University of St Andrews blamed the sudden change on increased student numbers this year.

“The late changes to the way A-level and Higher exam results were calculated have obliged us to admit significantly more entrants than would otherwise have been the case,” Principal Sally Mapstone said in a letter to staff and students.

“Our teaching arrangements are hugely important, but we are also focusing extremely closely on safety beyond the classroom, and how we support and ensure the safe behaviour of our student community in town.”

King’s College London told the BBC it was “prioritising the safety of our students and staff, by developing a flexible approach to the start of the new academic year”.

“Where possible, and it is safe to do so, we are planning for some small group teaching to take place on campus,” the university said.

Students at several other universities have also contacted the BBC with similar stories. One said she only found out her course had moved online four days after her enrolment.

“In addition, the overwhelming majority are providing some in-person social activities and support and wellbeing. Most students will experience a blended offer of online and in-person underpinned by a safety first approach,” it said.

But the National Union of Students called on universities to be “honest and clear about the practicality of studies resuming” and to “provide support with housing, finances, digital learning, support services and transport if circumstances change”.

NUS president Larissa Kennedy said government officials needed to offer a “bigger package of financial support for student renters – many of whom have struggled to pay rent and fallen into arrears.”